If you’ve never sat down to sip a nice, warm cup of yak butter tea, you probably haven’t spent time in the Kham Tibetan region of southwest China. Yak butter tea is the predominant drink among Tibetans and conversation over a pot of butter tea is just one aspect of life in Kham today. But where exactly is "Kham"?

Kham is one of three regions that make up the traditional Tibetan area of western China sometimes called "Greater Tibet", the other 2 regions are Ü-Tsang (Central Tibet) and Amdo. It is a large area covering over 924,000 kilometers² (356,000 miles²) and housing approx. 2 million population, composed of eastern sections of the Tibet Autonomous Region (TAR), portions of Qinghai and Yunnan provinces, and the western majority of Sichuan Province.

Throughout China, Kham is famed both for its beautiful natural scenery and also for its vibrant people. Kham is traditionally known as Chushi Gangdruk which means “4 major rivers, 6 mountain ranges”. This rugged terrain is characterized by mountain ridges and gorges, collectively referred to as the Hengduan Mountains running from northwest to southeast, and numerous rivers including the Mekong, Yangtze, Yalong River, and the Salween River flow through it. 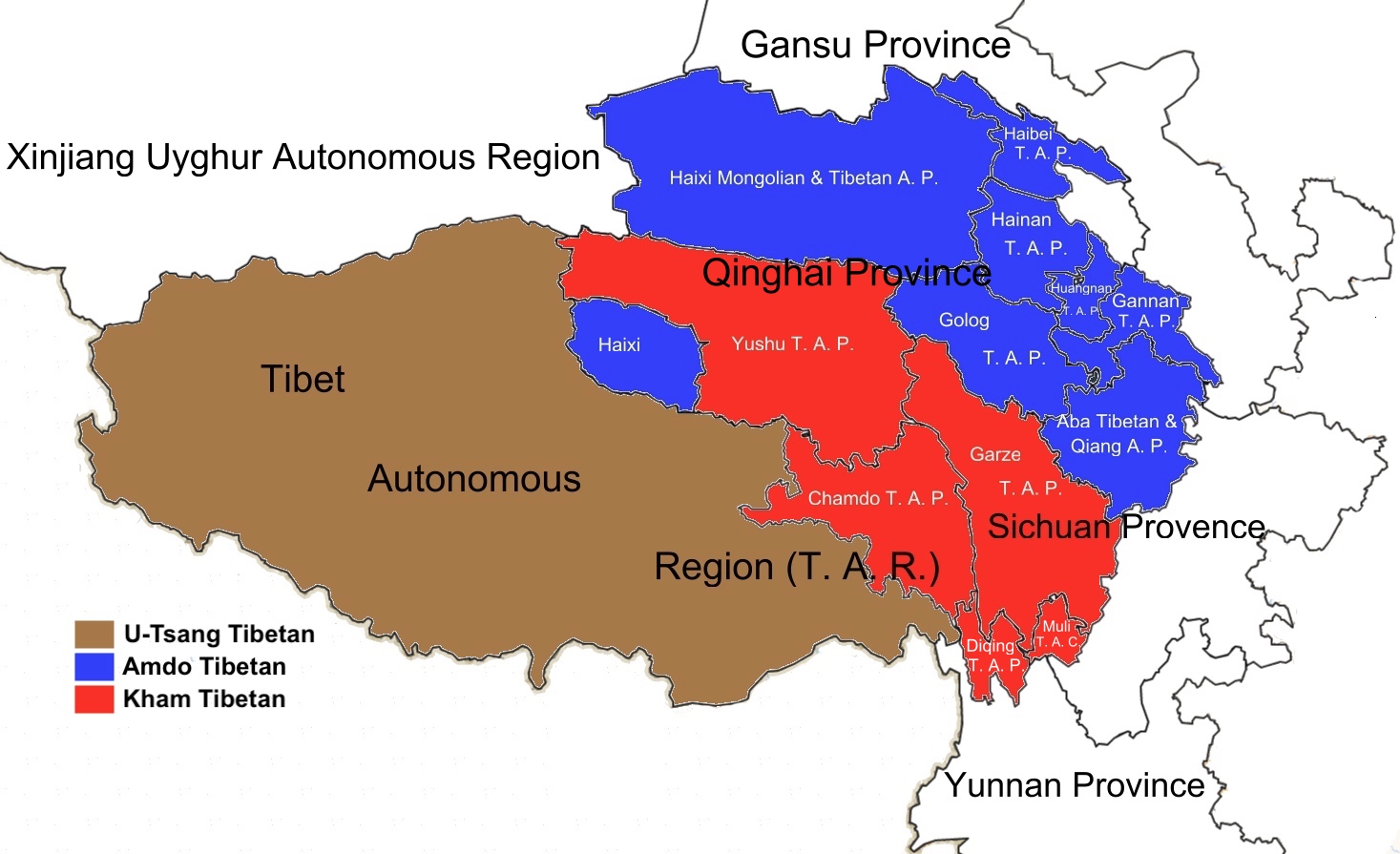 From the 10th century on, it has been neither under the authority of Lhasa for an extended period of time nor under the direct Chinese authority until the communist takeover in the 1950s. However, it was never controlled by a single leader but was split up into 2 dozen or more separate kingdoms with its own king. The most powerful kingdoms in Kham in recent centuries were the Kingdom of Chakla, Derge, Lingtsang, Nangchen, and Lhatok. Part of the reason that Kham never was under the authority of Lhasa was because of the different sects of Buddhism believed in Kham. The Dalai Lama, the government, and the most powerful monasteries in Lhasa follow the Gelugpa sect of Tibetan Buddhism while older schools of Buddhism such as the Kagyu, Nyingma, and Sakya (around Jyekundo) are followed in Kham. The ancient Bon religion is still practiced in Nyingtri Prefecture, also known as the Kongpo region.

The far northern parts of Kham found in Yushu (Qinghai) and Nagchu (TAR) prefectures, mainly shaped by plateau grasslands with an altitude between 4,200 meters and 4,800 meters, is sparsely populated and has long cold winters. Permafrost not suitable for cultivation is widely distributed in this treeless region, therefore, the few Tibetans living in this area rely on yak and sheep herding as most of their income. While the eastern Kham (Garze in Sichuan and parts of Chamdo in the TAR) has many deep river valleys. The towns in these valleys, lying between 2,800 meters and 3,400 meters, have a milder climate than northern Kham, you can find dense evergreen forests with fertile farming throughout this area. While in southern Kham (Diqing prefecture in Yunnan, parts of Garze in Sichuan and parts of Chamdo in the TAR), not only evergreen forests but also plenty of amazing craggy peaked mountains can be found too. The elevation in southern Kham is mostly between 2,600 meters and 3,300 meters.

Typical policy and how to get to Kham Tibetan Area

Chengdu, Xining, and Kunming are the main gateway cities to Kham Tibet. It is convenient to access a lot of the region via land or air from these 3 cities. The airport is available in Kham’s largest towns, Chamdo (3300m), Kangding (Dartsendo - 2,560m), Shangri-La (Gyalthang - 3,160m) and Yushu (Jyekundo - 3,689m). However, please be aware that the airport in Chamdo is open to domestic tourists only. For international tourists, the way to enter the Kham region in TAR is by driving via Sichuan-Tibet highway or Yunnan-Tibet highway.

To enter the areas of Kham in Qinghai, western Sichuan and northwest Yunnan, you are not required to join organize tours with permits or tour guides, you can take the public buses or hire a private vehicle with driver, however, please note that some parts in Qinghai and Sichuan might be closed occasionally. In addition, when traveling to Kham regions in TAR, such as Nagchu and Chamdo prefectures, foreign travelers require a complete organized tour including travel permits, a tour guide, a private vehicle, and a driver. Another important notice is that partly Chamdo prefecture could be closed without advanced notifications. 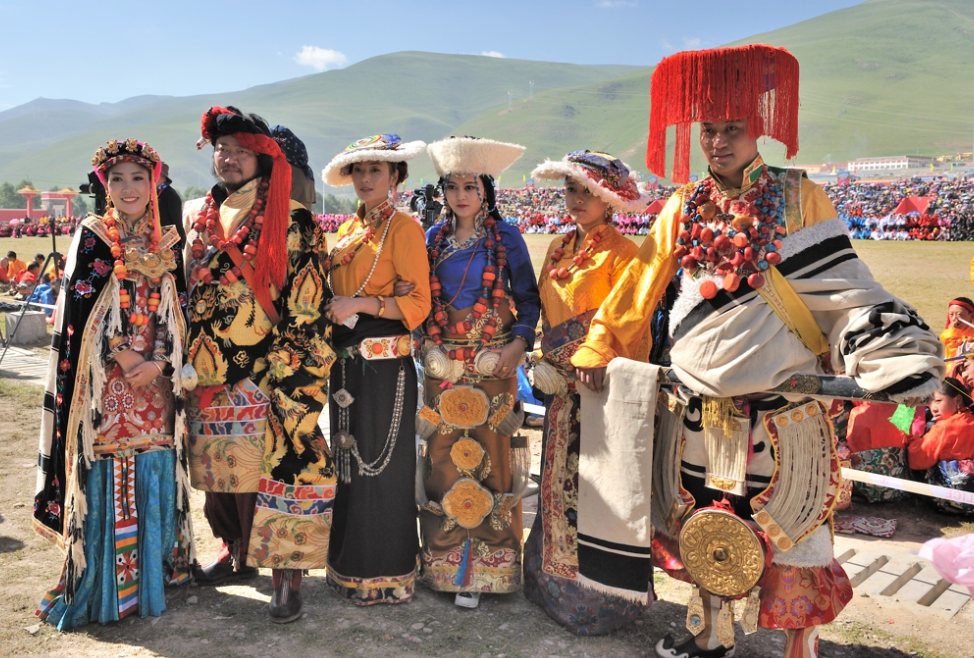 The Tibetans of Kham:

Though many people think of Tibetans as peaceful people, the Tibetans of Kham have a much different reputation: for centuries, Kham Tibetans were contending tribes of fierce warriors, often clashing with each other and terrorizing surrounding areas on horseback raids, killing and plundering villages. Over time, the warring tribes of Tibetans gradually spread out and formed distinct ethnic groups, and while the area is now peaceful, Kham men still have a reputation as feared warriors and can be identified by a singular red braid in their black hair, their beautifully colorful clothing, and sporting a large knife in their waistband.

As tribes and ethnic groups have moved away from Kham, their cultures have been reshaped by the new cultures they have encountered and the new regions which they have moved to. The people who have remained in Kham to this day, however, have preserved many practices of the region's original inhabitants, including a unique Kham dialect, heavy reliance on horses and horsemanship, traditional housing and dress, and older forms of Buddhism.

In almost all Tibetan communities, Buddhism is the underpinning for every aspect of life, but unlike many other Tibetan areas, the older Kagyu, Nyingma, and Sakya forms of Buddhism are still practiced in Kham today. Despite this unique regional difference and the nuanced practical differences in these schools of Buddhist thought, prayer wheels, prayer flags, robe-clad monks, and other notable Buddhist practices are all found throughout Kham.

Tibetans in Kham are renowned for their horsemanship. For centuries, a special breed of horse able to withstand the high altitude of Kham has been bred in the area. Horses and horsemanship play an important role in Kham culture even today, and there are two very large horse festivals held annually in the towns of Jyekundo, in Qinghai, and Nagchu in eastern Tibet. These festivities are highly important to the Kham people and draw participants, spectators, and tourists from all over the region and all over the world. The different exhibitions include long-distance racing, trick riding, honor guards, and more, and are a fantastic demonstration of the importance of horse culture and pride that Kham people have in their equestrian abilities.

The people of Kham have also preserved traditional aspects of homebuilding. Tibetan housing structures in the Kham region vary - many in Kham still live a traditional nomadic lifestyle and reside in yak-hair tents, while others have settled in villages and built multi-story houses using time-honored building materials and methods. These structures are easy to distinguish from other architecture in the region because of their ornate wooden frames and beautiful use of colorful paint to adorn the eaves and window frames. 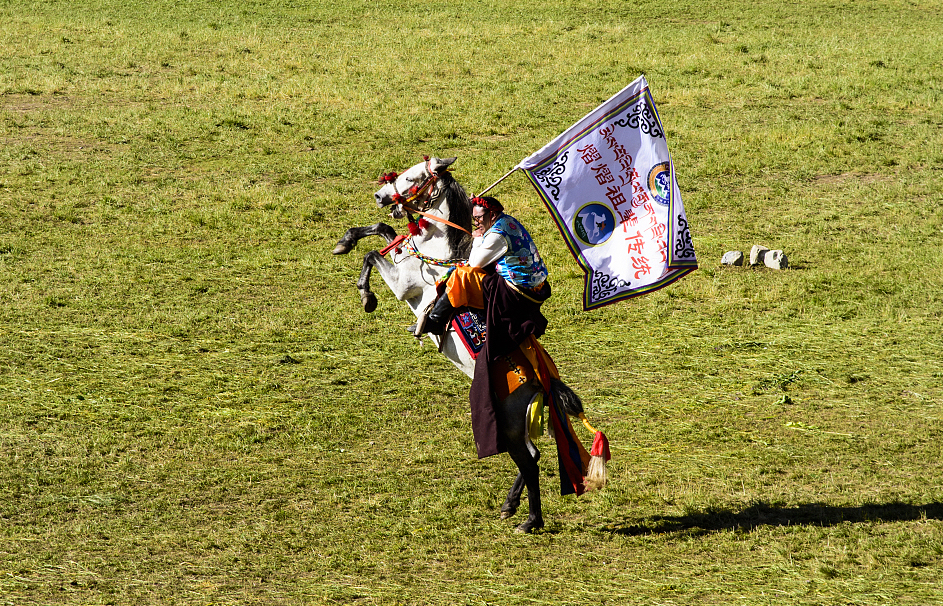 The many in Kham that still reside outside city centers live amid beautiful and, for Tibetans, sacred, natural sites where Tibetan prayer flags flutter in the clean air and much of the pristine landscape remains untouched. At all of these sites and many of Kham's other natural attractions, visitors are able to see both the natural beauty of the surroundings and the local Kham culture in nearby Tibetan villages.

The Kham region in Qinghai: 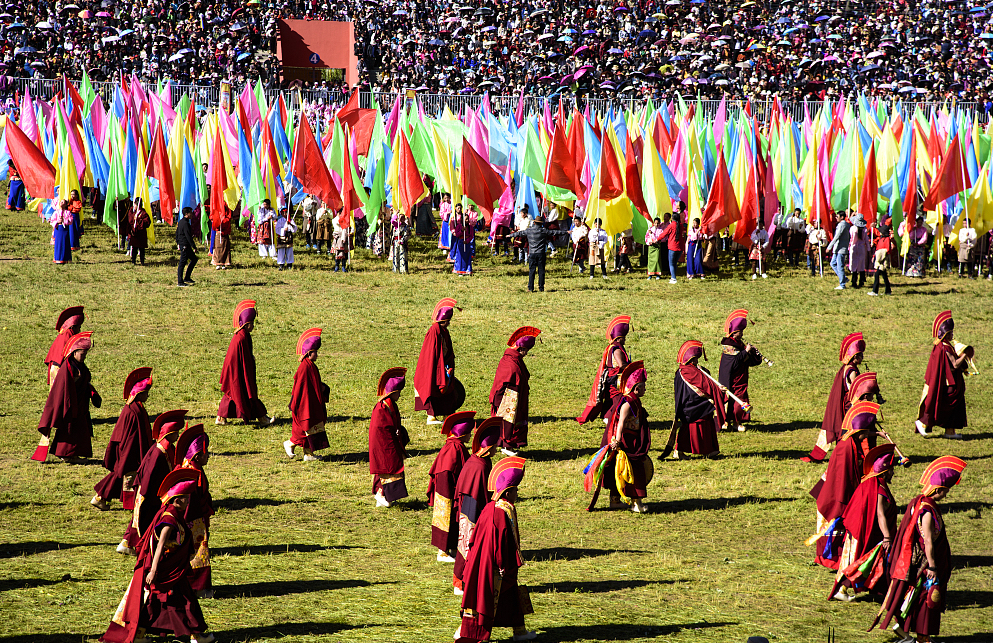 The Kham region in Sichuan: 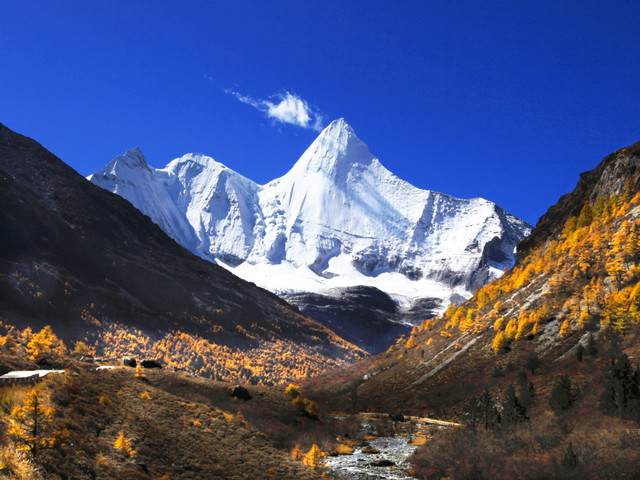 The Kham region in Yunnan:

The Kham region in TAR: 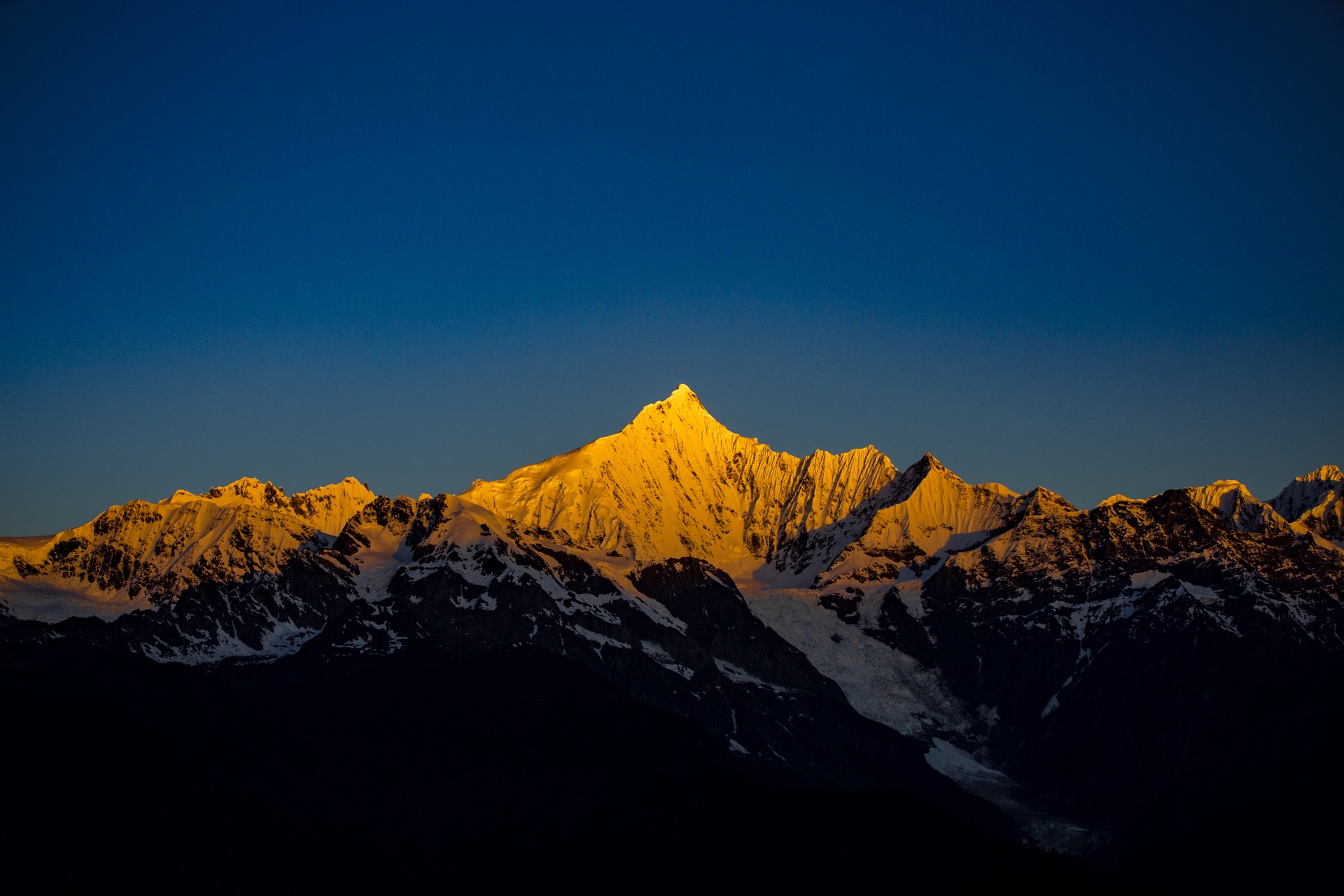