Riwoche Monastery, also known as Riwoche Tsuklakhang Tragyelma, is a monastery of the Taklung branch of the Kagyu School of Tibetan Buddhism located 29KM north of the small town of Ratsaka (also known as Riwoche Town), and 134 km west of Chamdo. The original name of this monastery is ‘Yanggong Monastery’ and it is called ‘Tragyelma’ in Tibetan. It is a famous Kagyu monastery in northeastern Tibet, with a great fusion of Tibetan, Han, and Nepalese architectural styles. It retains the characteristic red, white and black vertical stripes of the Taklung school, and is home to over 375 monks.

It has a history of over 700 years, founded in 1277 AD by Sangye On, a student of Sangye Yarjon, the third lineage-leader of the Taklung branch of the Kagyu School of Tibetan Buddhism and abbot of Taklung Monastery. In the beginning, it was only an offshoot of Taklung Monastery in Ü-Tsang, later it gradually grew to overshadow its parent monastery and ranks as the main monastery of Taklung Kagyu School in the Kham region. The content of its teachings, practices, and religious ceremonies is related to Sakya school, hence it’s also a mixed monastery with two sects and teachings. After the reign of the 12th hereditary temple abbot, the reincarnated living Buddha was adopted as the leader of Riwoche Monastery and the emperor Jiajing of the Ming Dynasty gave the title of Turktu to dominate the Ratsaka area. 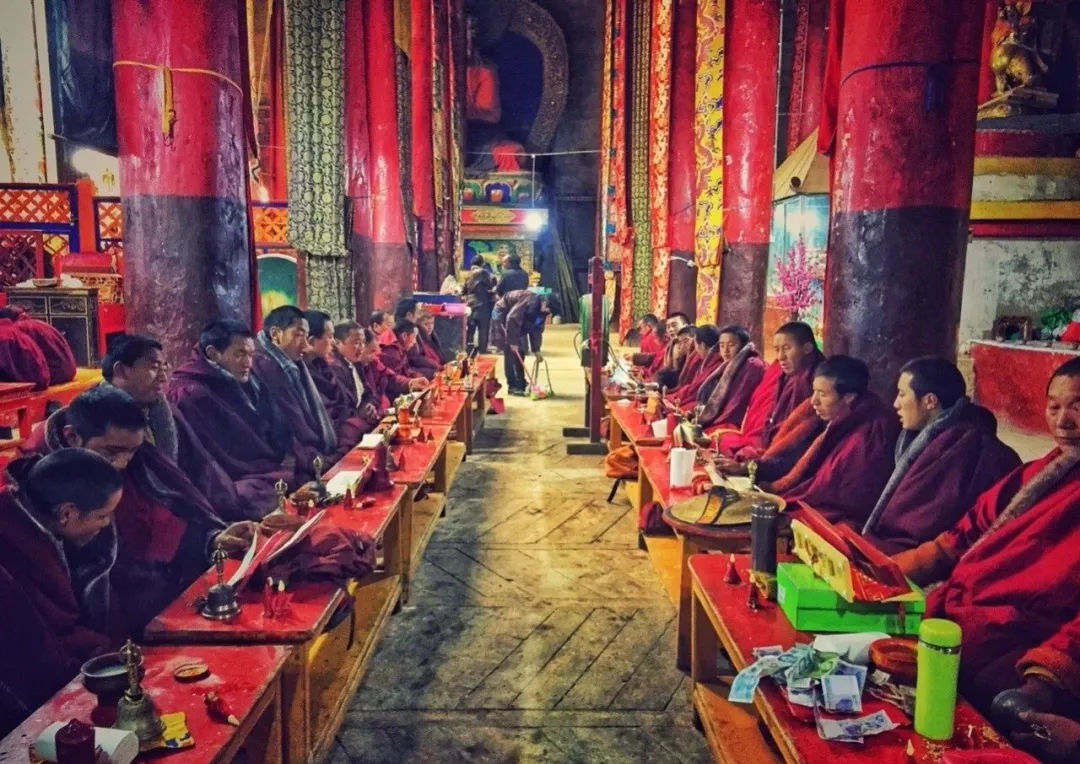 Riwoche Monastery stands at an altitude of 3,400 meters (11,155 feet) above sea level in a fertile valley where the Dzi River, a tributary of the Mekong River, flows through. The county where this monastery is located in a farmland area where mainly wheat and barley are cultivated. Here you can see local Tibetans living at their wooden houses and numerous yaks grazing on the mountains nearby. It has relatively mild winters compared to the other places of Tibet with winter temperatures rarely getting below -4°C and lovely summers with high temperatures ranging from 20-24°C and a considerable amount of rainfall.

The most distinguishing attraction of this monastery is the huge Tsuklakhang Temple towering over Riwoche village, which is the main temple of Riwoche Monastery and can be reached by a well-paved road from the town of Riwoche. Tsuklakhang Tempe is the oldest and grandest ancient temple in Chamdo District. It is widely renowned for its majestic and magnificent momentum and a large collection of statues of Buddhas and Buddist Sutras. In the past, there is an old saying popular among the locals, it is ‘Pilgrimage to Jokhang Monastery first, then to Tsuklakhang Tempe’, which presents its great reputation. At present, it has cherished many high-quality exquisite cultural relics such as the silver statue of Sangye On, the gold-plated saddle and sword said to be used by Gesar King, the portrait of Kalachakra, thangkas in Ming and Qing Dynasties, mental Buddha statues of different historical periods and beautifully carved sutras. A notable 14th-century cloth painting entitled Jnanatapa unearthed in recent years is preserved here, the central figure depicts the Onpo Lama Rinpoche and the spiritual lineage of Riwoche monastery. 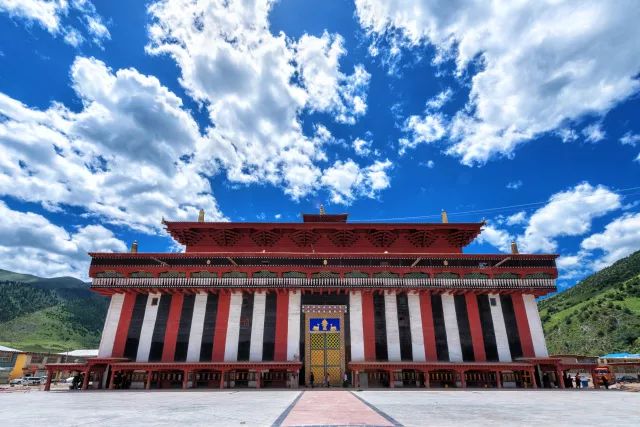 The Tsuklakhang Temple has a unique square shape with a 30-meter high imposing main building, covering an area of 2,856 square meters. The main building is three-storied and supported by huge tree trunks. The ground floor is called ‘Striped Flower Hall’ with 13.5 meters height walls surrounded by countless prayer wheels. Its outer wall is painted with red, white, and black vertical stripes, which is distinctive of the Taklung lineage. Inside, it houses lots of statues of Buddhas and Bodhisattva and hangs countless Thangkas. The second floor is named ‘Red Hall’ with outer walls painted red and a height of 9 meters. Here you have a deeper understanding of the history of Kagyu School’s birth, development, and prosperity by watching the 2 side walls painted with the portrait of successive patriarchs and eminent monks of Kagyu Sect. The top floor is ‘White Hall’ with a white wall and a height of 5 meters. It houses the treasures of this monastery, such as a golden statue of Sakyamuni said to be brought from the upper Taklung by Sangye On at the time of the temple built and contain some remains of Sakyamuni, 54 pieces of over 700-year Thangka boutiques of Yuan, Ming and Qing dynasties, 12 of which are over 1000 years and 2 of which are silk embroidered Thangka, many Buddhist scriptures were written in gold or silver ink, 5 Buddhist scriptures among them are over 900 years, as well as many other precious cultural relics including a 2,400 years statue of Bodhgaya in India, 3 over 1000 years Gandan Pagodas, 212 statues of Buddhas, etc. The top of the temple is decorated with a towering golden dome.