In fact, the weather in Tibet is not as harsh as many people imagine it to be. However, due to the high elevation, the sun radiation is extremely strong and the air is thin here. Moreover, the thin air can neither block off nor retain heat so that the temperature extremes can be met in the daytime and the same night respectively. Hence, the popular time for travel to Tibet starts from April to the beginning of November.

In terms of the best traveling experience, the best months to travel to Tibet should be May, June, September and October, as the weather is warm and adorable, there are lots of sunny days with sufficient sunlight and clear blue sky, alongside, those months are less crowded than the busiest months of July and August.

July and August are two of the busiest months because they have the warmest weather, the highest oxygen concentration, and the most beautiful natural scenery. And it is also the summer holiday in China. In addition, they are the monsoon season with the most rainfall. Sometimes, the rainfall may block roads, especially in the remote areas of Tibet, and make travel difficult but the scenery at the time will be the best. 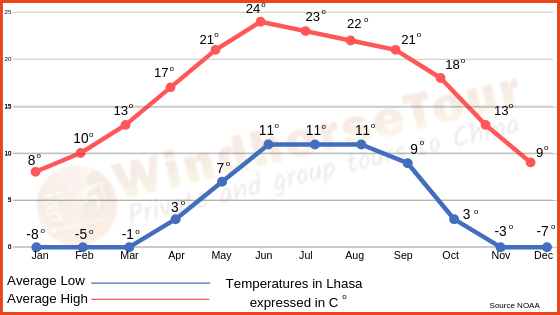 The best time to visit Lhasa (3,656 m) and central Tibet including Yamdrok Lake, Gyantse, Shigatse, Tsedang and Samye is from June to August, as the weather of this period is the warmest, the landscapes are at their best shape with green fields and villages, furthermore, it has the highest oxygen concentration of all the seasons.

Please note that it is suitable for traveling in this region all year round, as it has mild and nice weather throughout the whole year which is cool in summer and warm in winter compared to most places in Tibet. With the high elevation, the summer temperature of Lhasa and central Tibet is much lower than that in other places of China, and there are lots of sunny days making the daytime warm in winter. Besides, most attractions are historical and cultural sites, which are the least affected by the climate and seasons. Check the popular tour routes from the Lhasa tour and central Tibet tour. 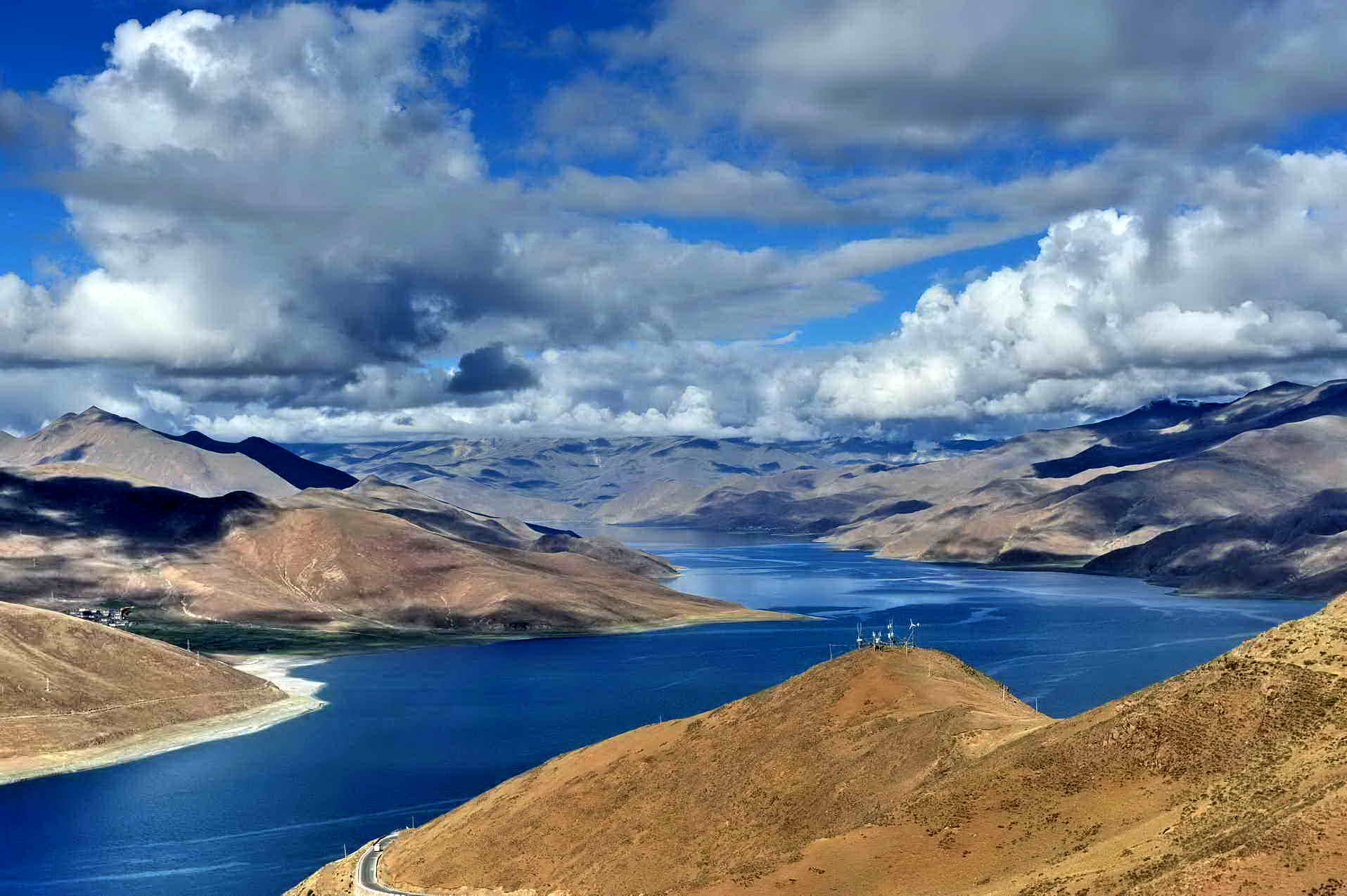 Best time to make the overland journey from Lhasa to Kathmandu

Regarded as one of the most popular routes for people to travel to Tibet connecting several top destinations of Tibet including Lhasa, Yamdrok Lake, Shigatse, and Mt. Everest Base Camp, the Friendship highway is basically in good condition year-round. However, the best time to travel along this highway is from April to June and September to October. As the landslide could happen on the way from the China-Nepal border to Kathmandu in the months of July and August, the heavy snowfall also can cause some troubles from December to February. Check this 8 days Mt. Everest Base Camp overland tour to Kathmandu to get more details about this route. 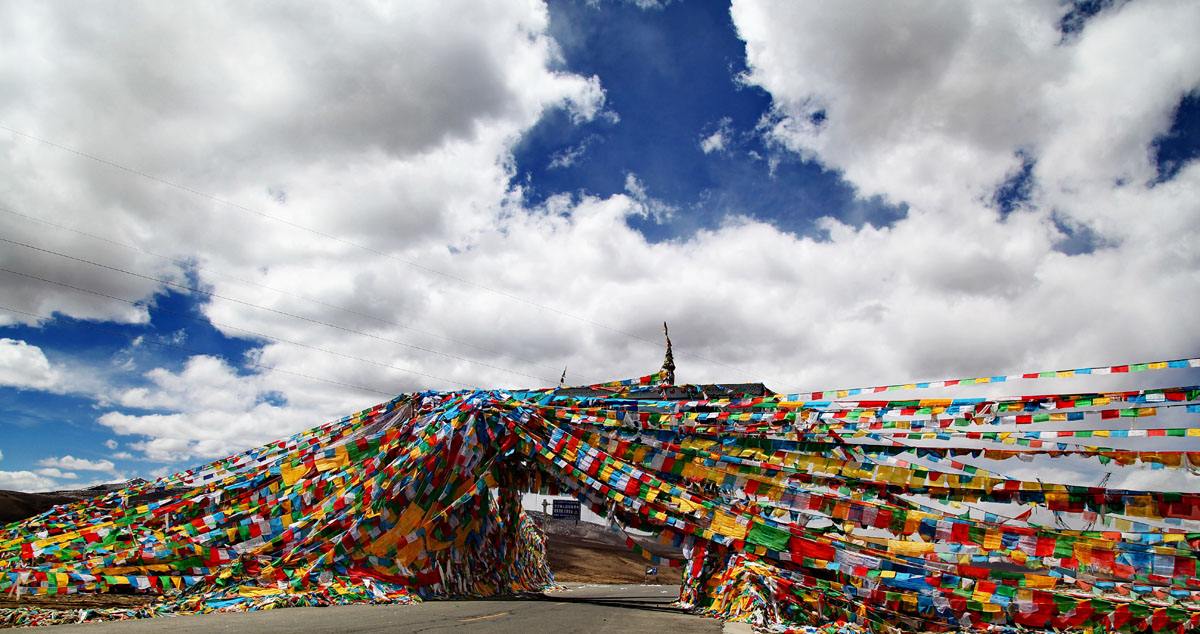 Generally, the best seasons to visit Mt. Everest area, so as to Everest expedition, are from April to early June and mid-September to October, especially May. Due to the clear and stable weather and high visibility of these periods, you can have a great chance to see Mt. Everest's true face or conquer Mount Everest. December to February, except for its severe cold and heavy snow, is considered as another good time to visit Mount Everest Base Camp (5,200 m) because the clear sky with sufficient sunshine and high visibility without mist/cloud, offering a great chance to enjoy the spectacular snowy scenery of Mount Everest which is bathed in brilliant and golden sunshine. Go through the Mount Everest Base Camp tours to find out your preferable tour route. 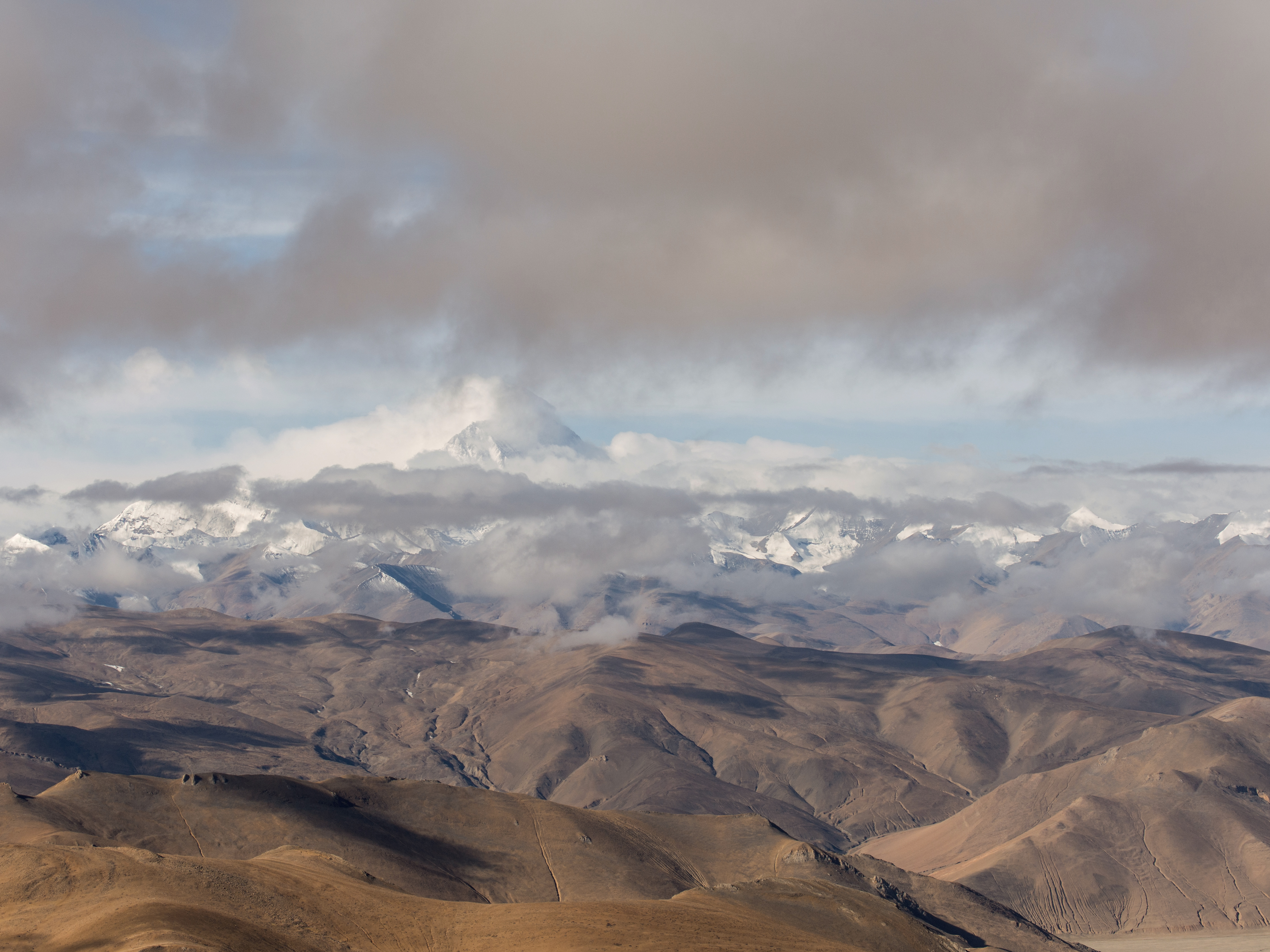 Northern Tibet generally refers to Nagqu Prefecture where the Qinghai-Tibetan railway goes through and the famous Namtso Lake (4,718 m) is located. This place offers incredible landscapes with vast grasslands and beautiful lakes and lots of wildlife. It is one of the best places to experience Tibetan nomadic culture as well. With the average altitude of 4,500 m, this area offers very limited time for tourists. Summer (July to August) is the prime time to see nomads on the high grasslands with their yaks and sheep and enjoy the great plateau plain scenery in northern Tibet. 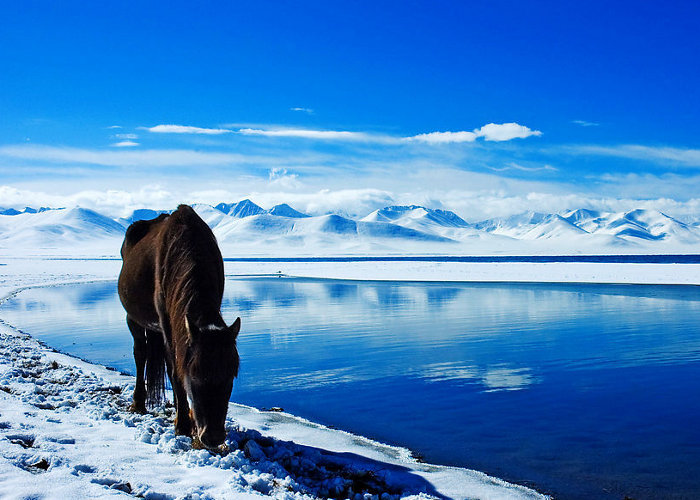 With an average altitude of over 4,500 meters, Mt. Kailash and Far Western Tibet Nagri area are considered as one of the most inaccessible and remotest corners of Asia. It is a place full of challenges, beautiful landscapes and historical relics. Here you can not only trek along the adventurous Mt. Kailash Kora, see the stunning Pangong-Tso and holy Manasarovar Lake; but also admire the mystic the Guge Kingdom and Rutok Ancient Petroglyphs.

The best time to explore this region is from mid-May to September, but travelers should always be prepared to have the changeable weather. Snow could be encountered on the high mountain passes at any time of year. The temperature will often drop well below freezing at night, even during the summer months. A great time to meet the pilgrims at Kailash Kora is from June to September at the Hindu pilgrims season. Check our Mount Kailash & Far Western Tibet tours to plan your challenging trip there. 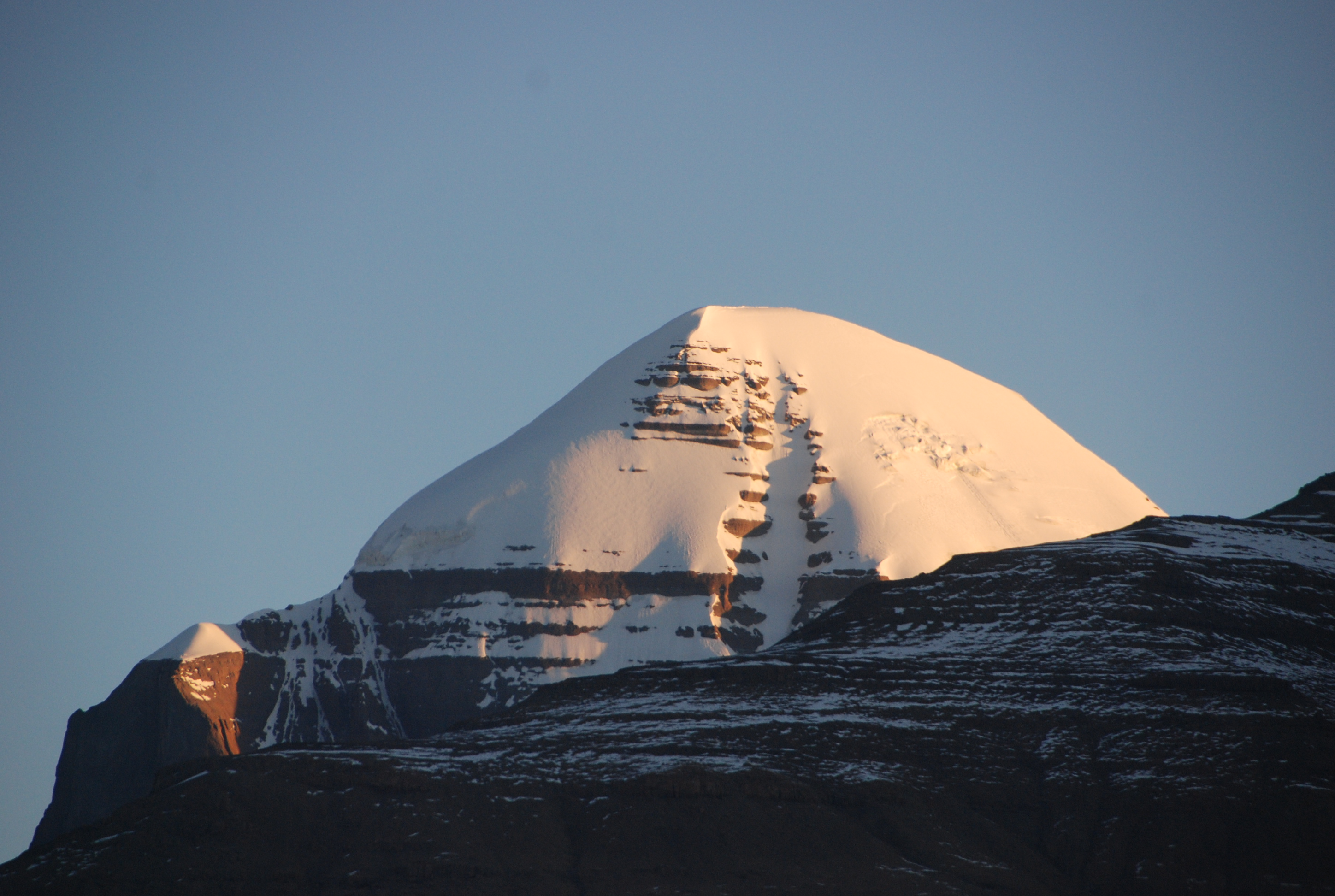 Eastern Tibet generally refers to Nyingchi and Chamdo prefectures, the suitable time to travel in Nyingchi is from March to early November, among the best would be spring (March to May) and autumn (Sep. to early November). In spring, every corner of Nyingchi is shaped with the green grass and beautiful wildflowers, the rhododendrons are blooming on its mountains and the crystal clear lakes are accompanied by snow-capped mountains. Autumn is the most colorful season, which makes it like a fairy tale world dotted with golden pine forests and other colorful leaves, green valleys, glaciers, and snow-capped mountains. Check the Eastern Tibet tours to make better plans. 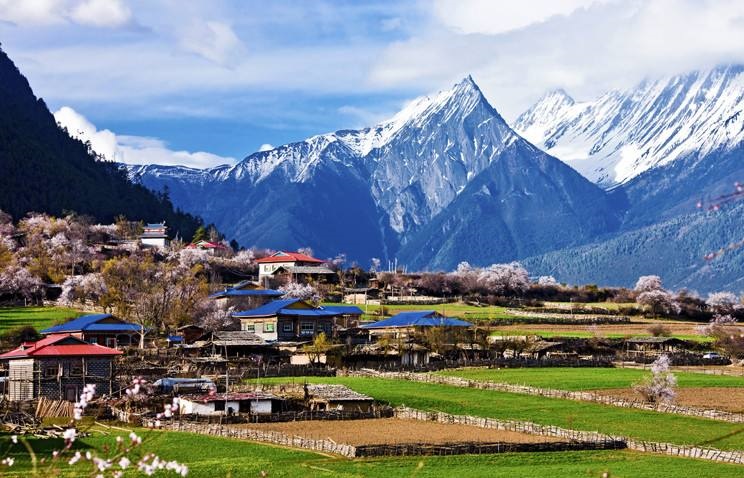 Best time to do trekkings in Tibet

Generally, the best time to trek in Tibet is from late April to early October. The weather in those months is warmer and suitable for trekkings. But the weather in Tibet is always changeable and unpredictable due to the high altitude, different weather might appear alternatively on the same day, which requires careful preparation. Late April to June is an excellent time for trekking in Tibet, with less rainfall and snowfall, and lots of sunny days with clear blue sky and puffy white clouds. September and early October are ideal to trek in Tibet as well, as the retreat of the southeast monsoon and the unarrived northwest cold wave of this period brings sunny days with temperatures above freezing and high visibility, clear and crisp nights.

July and August are the warmest months of the year across the Tibetan Plateau, the mountains /valleys are in an amazing color of green, the landscapes are at its best shape among all the seasons. It is also a great time to visit local Tibetan nomad families in their yak wool tents along some of the trekking trails. However, those two months are also considered as the rainy season in Tibet, it may not receive as much as what Nepal at the south side of the Himalayas receives, but it does rain in Tibet during the summer. It won’t rain every day, but it will rain a few days each week in most regions. Even though it does rain, it is still possible to trek in Tibet, as long as you make good preparation. Go through the Tibet trekking tours to pick up the trekking route of your interests. 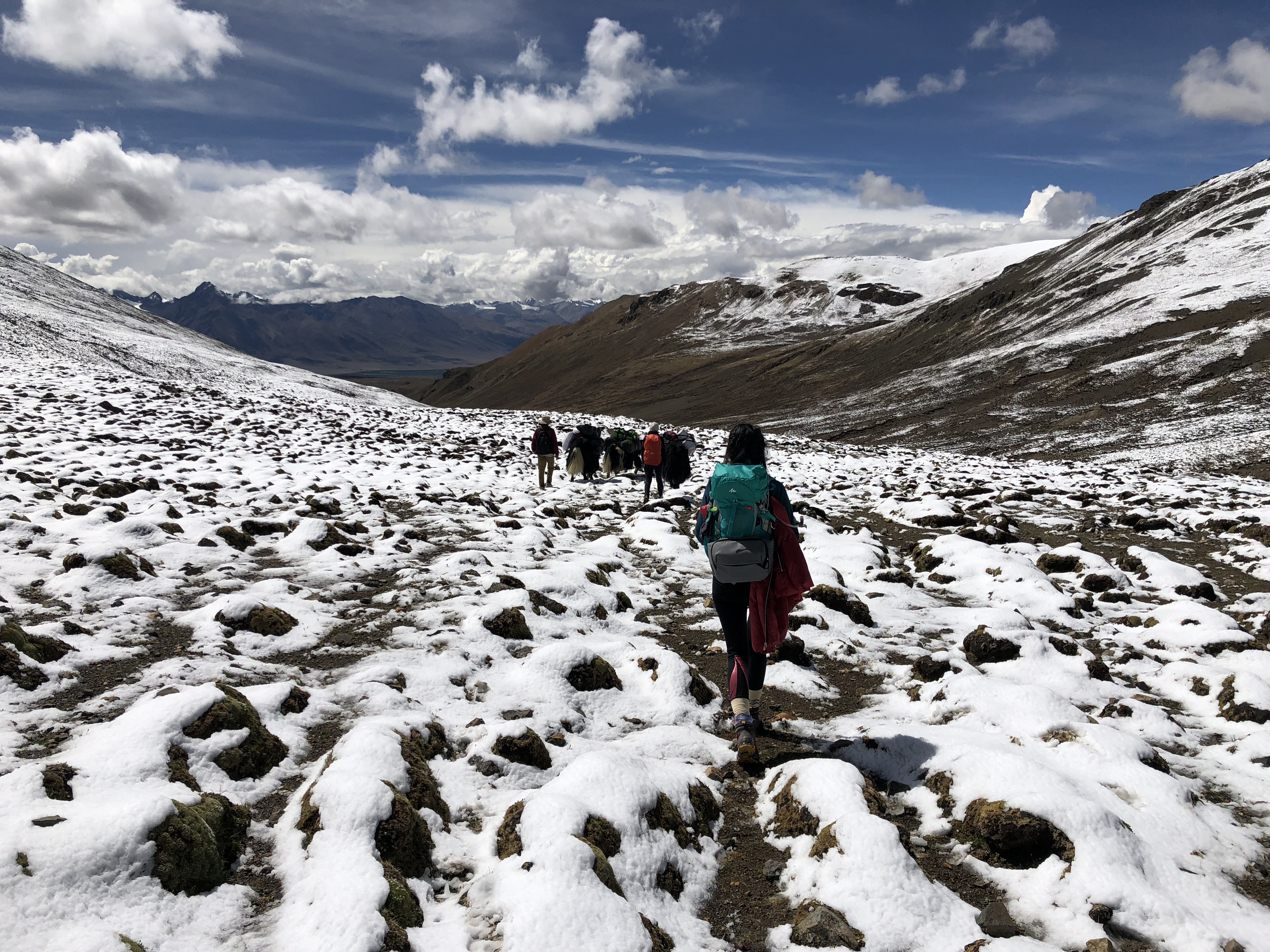 Best time to enjoy the festivals and cultural events

For those desiring to discover more than just the significant landscape and historical attractions on the roof of the world, we would highly recommend them to schedule a trip covering one of the great atmospheric festivals in Tibet. These festivals are great times for tourists to immerse themselves in Tibet’s unique culture and Buddhism. They are the showcases of the rooted tradition, appealing culture, and great piety of the Tibetan people. Here are the most important and famous festivals for reference.

Losar (Tibetan New Year): It is the most significant festival in Tibet for family reunions and many prayer activities, celebrated over a period of the first 3 days of the first month in the Tibetan lunar calendar, usually in late January or February in the Gregorian calendar. It’s a particularly colorful time to be in Lhasa, as the Tibetan opera is performed, prayer ceremonies take place at the Jokhang Monastery and new prayer flags are hung on the roof and the mountain top. In the vast agricultural and pastoral areas, the entertainment activities including the new horses packing saddle ceremony, horse-racing, tug-of-war contests, casting, etc.

Saga Dawa Festival: Saga Dawa will be held on the 15th day (the full moon) of the 4th Tibetan lunar month (usually a day in late May or June of the Gregorian calendar), which marks the date of Sakyamuni’s conception, enlightenment, and entry into nirvana. Huge numbers of pilgrims go to monasteries and temples to pray, walk along the Lingkhor circuit in Lhasa, and the sacred Mt. Kailash Kora. Besides, a new prayer flagpole will be raised in Tarpochen of Mt. Kailash to replace the old one. 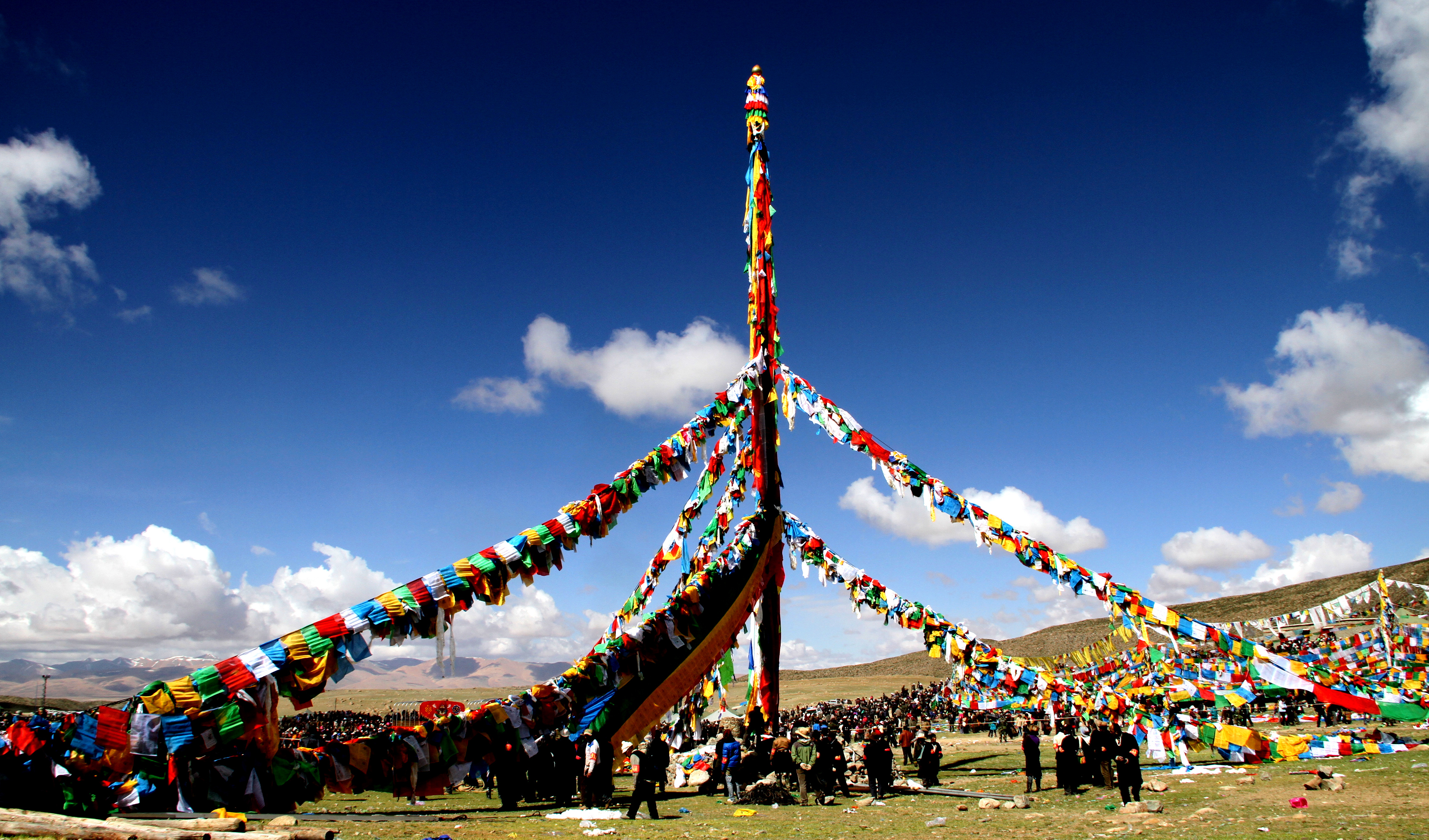 Shoton Festival: It is also called the Yogurt Festival. A huge Thangka painting bearing the image of a grand Buddha unveiled on the hillsides near Drepung monastery, in every early morning of the 30th of the 6th month in the Tibetan lunar calendar, usually August in Gregorian calendar, remarks the beginning of this one-week festival. The Tibetan opera performance, horse racing show, picnic in Norbulingka Summer Palace, and activities like trekking will also be held to celebrate this big event. It draws thousands of Tibetans and global travelers, making it crowded at the major attractions in Lhasa.

Nagqu Horse Racing Festival: It is the grandest event annually held in Nagqu Prefecture of Northern Tibet. It usually starts on August 10th and lasts 5 to 15 days. Thousands of nomads dressing in their folk costumes head to summer pastures of Nagqu and set their tents there. The horse racing mainly includes archery, target shooting, athletics, short track sprint, picking up Hada on horseback. Except for horse racing, some traditional interesting nomad sports such as tug-of-war contests, rock carrying challenges, and long jump will be held during this festival. 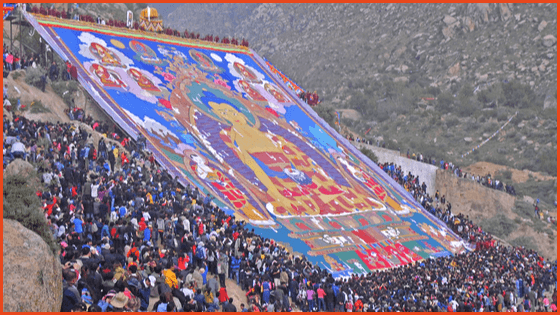 Tibet is a region suitable for visiting any time of year, but certain months are better than others depending on your goal and preferable activities. To plan a trip to Tibet, it’s important to understand where to go, what types of activities you are interested in, and the weather conditions. For those who would like to take amazing photos of mountain peaks, the best time should be from mid-September to the next early June. For those who want to avoid crowds and reduce cost, winter time (November to the next March) is a great choice. For those who prefer to enjoy comfortable temperatures, the best period should be from June to September. However, no matter when you make a trip to Tibet, there is no doubt that the experience will be unique and unforgettable. You will be shocked by its breathtaking landscapes and rich distinct Tibetan culture and atmosphere.

Tibet Mountains and Mountain Ranges in Tibet
Tibet Autonomous Region vs. the Tibetan Area
A Complete Travel Guide to Mount Kailash and Kora Trekking
How to calculate the cost
50 Things To Do in Tibet, Top Tibet Tourist Attractions
A Complete guide to travel in Qinghai & Gansu Tibetan Region
Best Time to travel to Mount Everest Base Camp in Tibet
How to plan a Trekking in Tibet