Drepung Monastery - Lhasa and around

Drepung Monastery (admission: CN¥60), is located at the foot of Mountain Gambo Utse, about 8 km. (4.97 mi.) west of central Lhasa. The huge numbers of the white monastic buildings in Drepung Monastery that piled up on the hillside seem like a heap of rice from afar, so it gains the name ‘Drepung’ which literally means ‘rice heap’ in the Tibetan language.

Drepung Monastery is one of the great three Gelugpa Sect university monasteries of Tibet (the others are Ganden Monastery and Sera Monastery), holding an important position in the history of Tibetan Buddhism, used to be the largest and most powerful monastery in Tibet. If you are planning Tibet hiking tours, Drepung Monastery is definitely an attraction you should not miss.

Drepung Monastery is the largest among the three Gelugpa Sect monasteries. It was originally founded in 1416 by a charismatic monk and disciple of Tsongkhapa called Jamyang Choje. Within just a year of construction, the monastery had attracted more than 2,000 monks.

In 1530, the second Dalai Lama established the Ganden Palace, and the monastery had become the residence to Dalai Lamas until the fifth moved to Potala. It was from here that the early Dalai Lamas exercised their political as well as religious control over central Tibet. 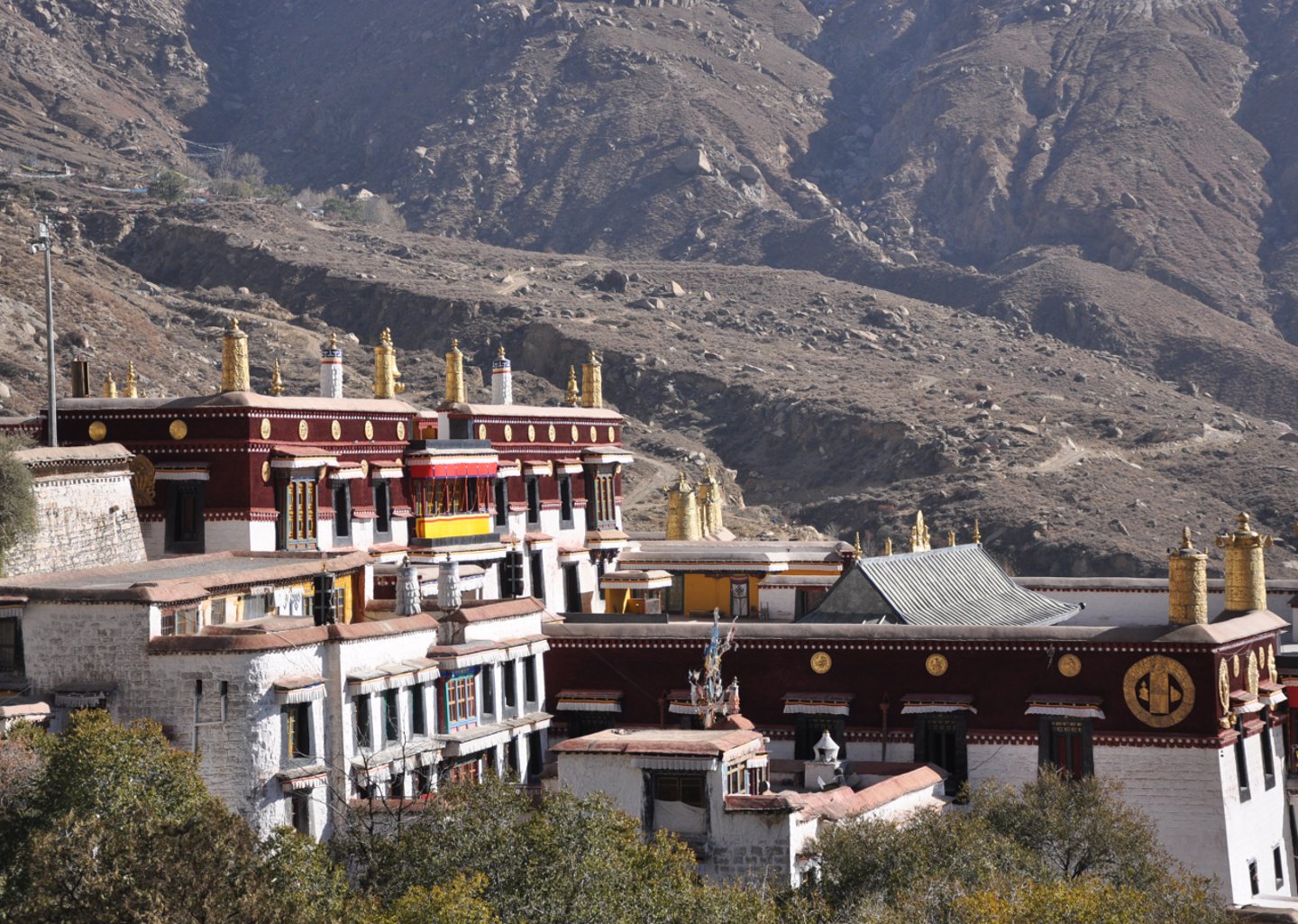 Generally, the sightseeing at Drepung Monastery takes about 2-3 hours. Normally, we always recommend our clients to visit the chapels in the morning as many of them close at 2 pm. However, at the northeast corner of the monastery, there is a debating courtyard, if you're here in the afternoon and lucky enough, you will witness the monk-debating tradition of Tibetan Buddhism with lots of shouting, hand slapping, and gesticulation between 02:30 pm and 04:20 pm.

The building complex of Drepung Monastery is organized to be centered on two magnificent white pagodas, and many natural caves were rebuilt to serve as the ashrams for monks. Ganden Palace, Main Assembly Hall, four tratsangs and kamsons are the sights that should not to be missed while visiting the monastery.

The Main Assembly Hall (also spelled Coqen Hall or Tsogchen) is the principal structure in Drepung Monastery. The huge interior is very atmospheric, draped with thangkas and supported by over 180 columns, some of which are adorned with ancient armor. The second story of the hall houses a collection of sutras including a set of Gangyur Tripitaka written in gold powder, and woodcarving sutras of the Qing Dynasty. Climbing to the third floor you will witness a sacred shrine which is worshiped with huge bronze statues of Qamba Buddha.

Same with other monasteries in Tibet, Drepung Monasteries also has four trasangs (colleges) for its monks to study Buddhist Classic. The Loseling, Gomang, and Deyang tratsangs focus on Esoteric Buddhism, while the Ngaba tratsang on Exotic Buddhism.

Some travelers, after the sightseeing at Drepung monastery, will continue walking about 10 minutes downhill to Nechung Monastery and spending about 30 minutes there. The sightseeing at Nechung Monastery is worthy of its historical role as the seat of the Tibetan State Oracle until 1959, it is also a place associated with possession, exorcism and other pre-Buddhist rituals.

For travelers, desiring to discover more than just the significant landscape and historical attractions of the roof of the world, it is highly recommended to schedule a trip to Lhasa during the Shoton Festival, also called Yogurt Festival, considered as a showcase to rooted tradition, appealing culture and great piety of the Tibetan people. It is the largest and one of the most important festivals for Tibetans.

A huge Thangka painting bearing the image of a grand Buddha unveiled on the hillsides near Drepung monastery, in every early morning of the 30th of the 6th month in the Tibetan lunar calendar, usually August in Gregorian calendar, remarks the beginning of this festival, and the festival will last one week. Except for the display of grand Buddha in Drepung and Sera Monasteries, Tibetan opera performance, horse racing show, picnic in Norbulingka Summer Palace and activities like trekking will be held to celebrate this big event. It draws thousands of Tibetans and global travelers, making it crowded while sightseeing at Drepung Monastery, Sera Monastery, and Norbulingka Palace. 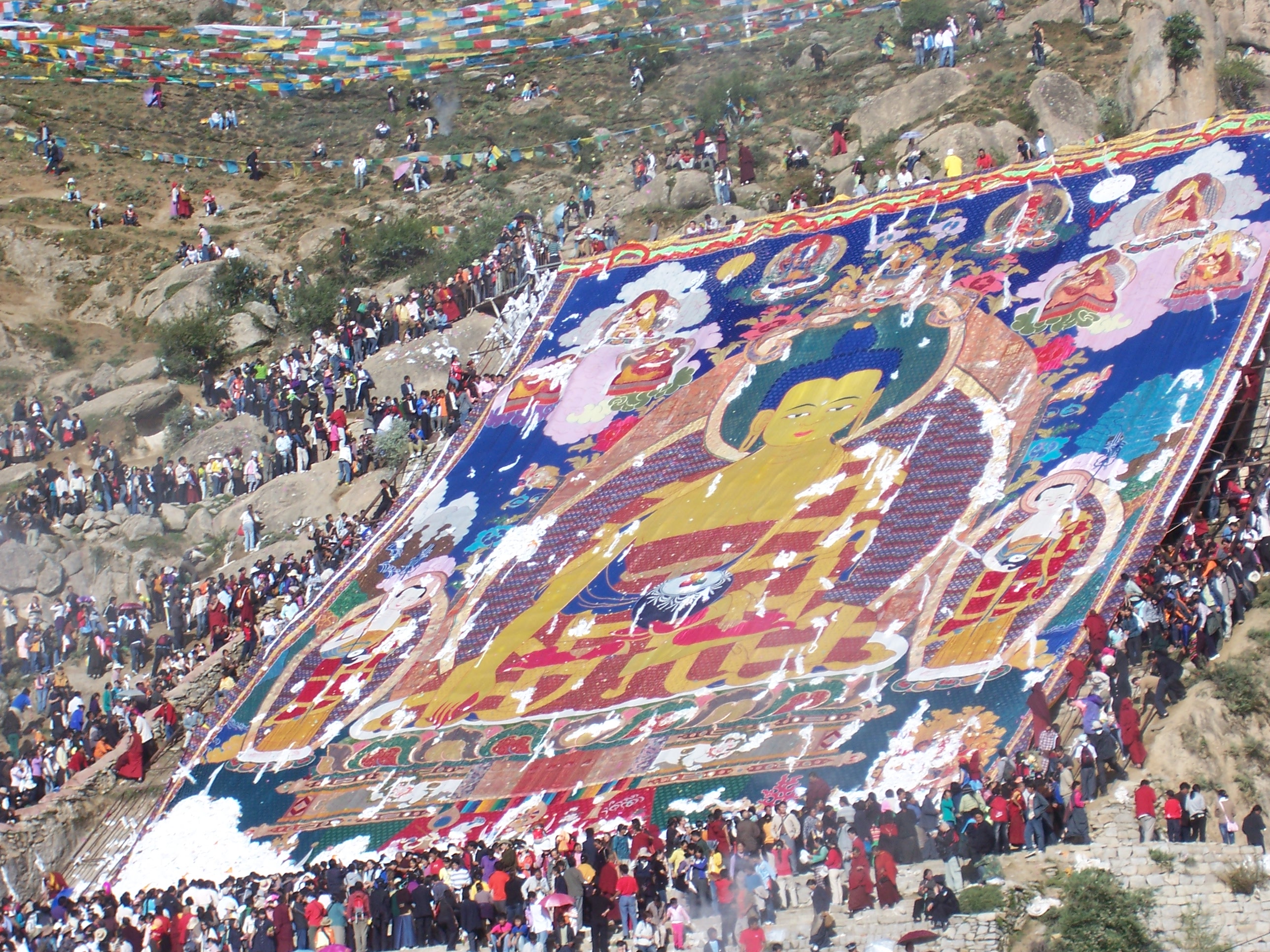 Lhasa
⇀ Lhasa
...
Lhasa ⇀ Gyantse ⇀ Shigatse ⇀ Lhasa
6 days
∙ Private ∙
Culture and Heritage
On this classic Tibet tour, travel back in time and witness the unforgettable ancient culture of Lhasa, Gyantse and Shigatse. The amazing natural landscapes all the way presets you with the wonders of Tibet.
Add to shortlist
From ¥ 4,070
¥ 3,700
View tour >