The size of the primitive panda and the early giant panda is about half of that of the modern giant panda. Its size is similar to that of a fat dog, but the mouth and the legs are relatively shorter. Along the evolution, the pandas' family has experienced the tribulations for more than two million years. The body is becoming bigger and bigger gradually, and it looks quite plump. Its body length is about 160 to 180 cm, and the weight is about 80 to 125 kilos.

The panda's fur is light, simple but elegant, there are only two colors: black and 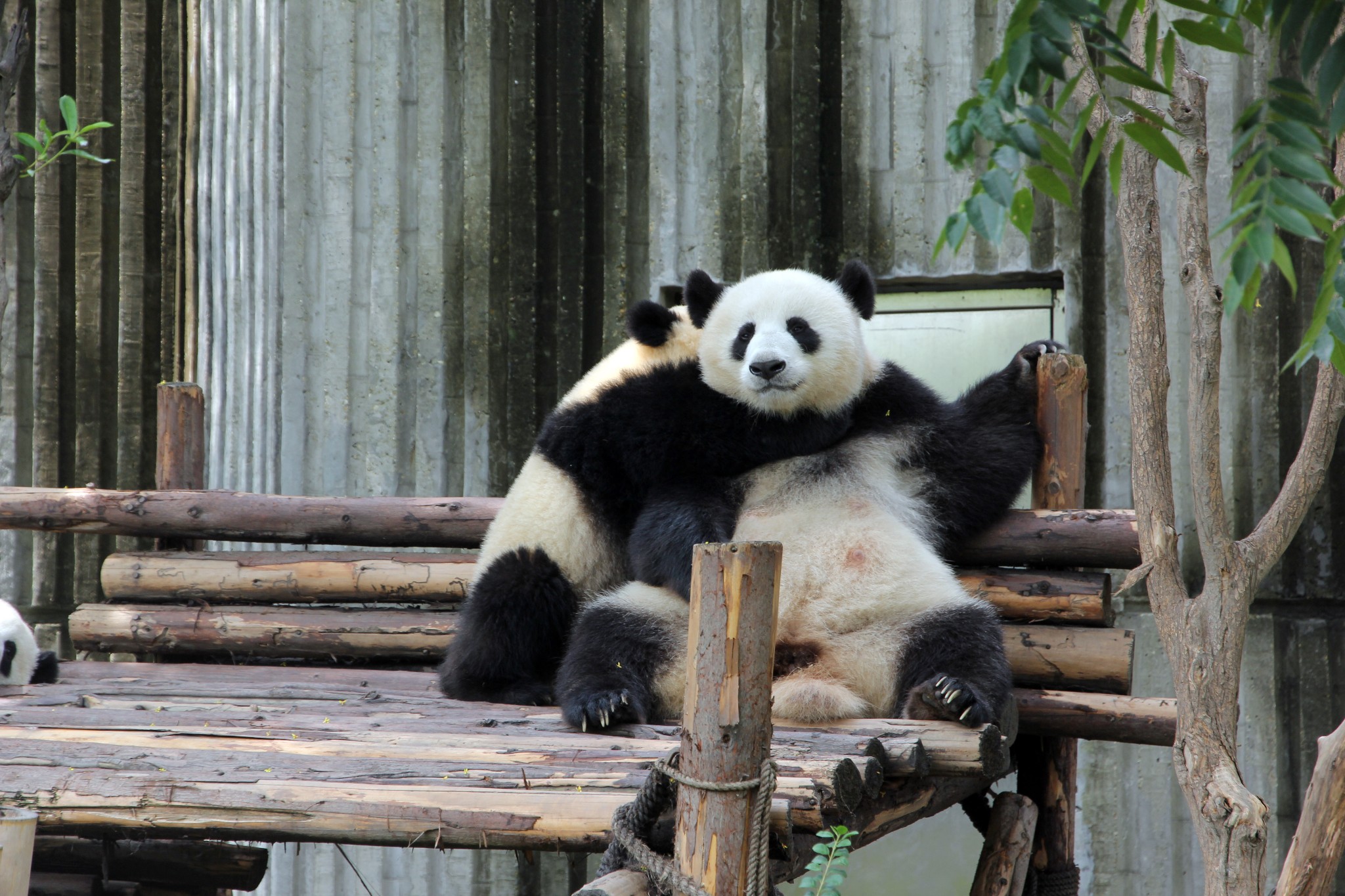 white, the contrastive colors are very sharp and bright, so in giant panda inhabiting areas it is called the colored bear or the white bear. The hair on the body of panda is very thick, and the loose froth medullary layer in the hair is very thick too, which is a good heatproof light material. The covering on her body is especially thick, and the surface of the hair is abundant in grease. All these configuring structural characteristics strengthen the effect of keeping its body warm. Such thick light fur coats have the precautionary and curative effects of relieving rheumatic pains and removing dampness. This is the reason why the moisture won't affect their bodies and they don't infect with rheumatism even if they are living in a wet environment all year-round. So even though in severe winter, they won't hide and hibernate like bears and they can sleep in the snowfield and stay over.

Seen the whole face, the giant panda really looks like a cat. Their mouths are not as thin as those of the bears and they are not as ugly as those of the dogs. Their faces look round. The two eyeballs are very small, but there are two black plush loops around the eyes, so they look as if they have worn a pair of black glasses. If you look at them suddenly, they look like a pair of big round eyes. Their ears are very strange that they are round and big, and they are so black that there seems to be two black peonies on the head. This pair of black ears also make them to adapt to the cool and cold environment, and they can reduce the energy being dissipated. As for their eyes, except the decorative big black loops, the real eyeballs are very small. The apples of the eyes in the eyeballs are as slit-like those of the cats. Their long-term adaptation to the reclusive environment where there are remote mountains, immense forests, and thick bamboos results in that the top of the nose bridge connecting the eyebrows is not developed so that they are shortsighted. This means that they can move about when it is dark because they have the same eyes as those of the cats, which can adjust to the change of the light in the dark. Their hearing is yarer than the seeing because they have round and big ears to collect the sound wave. Once they have heard some unusual sounds in the bamboos, they will become as shy as the girls and run away and hide. So it is very difficult to see their true portraits in the wild.

The faces of the giant pandas are similar to those of the cats, but they are not the 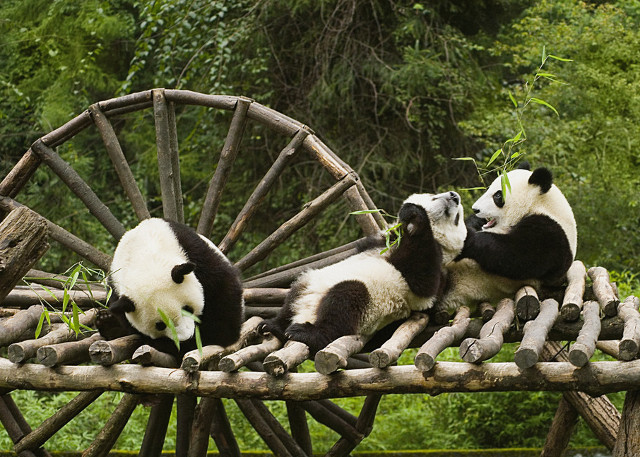 same. Their round faces seem to be quite plump gradually from one generation to another because they have adapted to chewing the bamboos and their chewing muscles on their faces have been practiced in the long term. So the bones that are used to connect the muscles on the face are different from those of the bears and the cats. The mandibles on the left and right are joined together firmly in the front. Each mandible is very strong. The cheekbones are wide and flat. There are arrowy carinas that are bulged highly on the parietal bones. This kind of structure of the skull is able to support the strong masseter muscles and temporalis that have strong chewing power. On the other hand, their faces seem to be thin because they have been restrained relatively, and they seem to be very solemn and strict and lack the eager-beaver facial expression of the monkeys. The whole facial form is round and not ugly, so they seem to be the animals in the cartoons and they are liked by everyone.

Their teeth are not as sharp as those of the flesh-eating beasts of prey, and they have no flesh-eating teeth that can tear the flesh lumps, but they are developing towards biting and cutting the bamboos. They have three pairs of incisors, which are not developed and have no cutting power. So they don't use the incisors to cut the bamboos and eat them but use the molars at the back to cut them. The canine teeth are not the same as those of the beasts of prey, which have the execution like a sharp sword. They are short and coniform. They can also be used as a kind of self-defending weapons when fighting. So the canine teeth of the male 'citizens' who are brave in fighting are thicker than those of the female ones. Because they evolve to live on the bamboos, their raiding teeth, which are left by the ancestors and could be used to tear the flesh, have become as the same size as the two molars on the upper jaw and the three ones on the mandible. The size of this kind of molars are not the same as those of the bears, the grinding surface is unusually wide and big, the root of the teeth have been strengthened and lengthened, and plus the powerful chewing muscles, they can bite the bamboo poles that are thicker than a finger into two parts with a bite. As for the structure of the teeth as a whole, their development is quite different from that of the flesh-eating animals' teeth. But seen from the silhouette of the teeth surface where there are many holes and bulges on the grinding surface of the molars, there are still some clear contour lines of the high mountains and the deep valleys. This shows that they have remained the chewing power of the flesh-eating ancestors to some extent. So we can treat them to the barbecued mutton and let them enjoy a big meal. When the mountain pass is sealed by the snow in winter, they can pick up some bodies of the wildlife that are frozen to death and eat them, or they can go into the deep valleys and visit the cottages, where they can pick up some bones of the pigs, the hoofs of the sheep and the heads of the cattle, which are deserted by the villagers.

Their bodies are not as spry and light as those of the common flesh-eating animals, but as fat and plump as the bears like the gentlemen. But all of their joints are very agile that they can do all kinds of movements like a jujitsu actor. They can use their mouths to bite their hips and their tails; they can loop very neatly. Their four feet are as strong and powerful as those of the bears, and they can use the baseboards to walk like the bears. But their feet are not the same as those of the bears. Their forefeet are as inward as those of the bears, but the bears' back feet are not inward, and theirs are inward. So when they walk, they are similar to the bears, but they are different from the bears, let alone the cats. They are walking leisurely and seem to be carefree and content. They seldom rush or jump. This kind of walking manner is not only a kind of adaptation to the thick bamboos, but also propitious for saving the energy when walking. At the same time, their baseboards are not the same as the bear's slick paws while there are thick hairs on them. So, compared to the bears, they are better at walking on the wet lichen in the forest, on the slippy cliffs and the steep inclines or on the ice slopes and they won't skid.

The tails of the giant pandas don't look like those of the bears; they are relatively longer especially when they are young. But when they grow up, their tails relatively become shorter, only 10 to 15 cm. There is a naked area with no hair at the base of the tail, and there are many glands in it. These kinds of glands are called circumanal glands according to the zootomy which can excrete a kind of secretion that is sour and smelly, and it can help to exchange the information between each other or when having a love affair. The tail is short, but the hairs on it are flocky, so it seems to be fluffy and thick. When they use the smell excreted by the circumanal glands to transfer the information, the tails play the role of brushing so that the sphere of the smell can be made wider and the smell can spread everywhere, which is good for exchanging the information more effectively and takes place of the vocal calls.