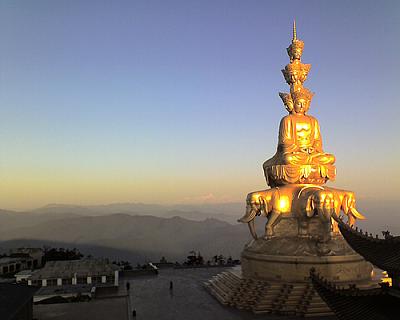 Situated in the south of China's Sichuan basin, Mt. Emei is one of the four sacred Buddhist mountains in China (the other three being: Wutai Mountain in Shanxi Province, Jiuhua Mountain in Anhui Province, and Putuo Mountain in Zhejiang Province). Ever since the introduction of Buddhism to China in the 1st century, Mt. Emei has been home to a number of Buddhist structures, and now there are more than one hundred temples and monasteries altogether!

In 1996, Mt. Emei was enlisted in the world natural and cultural heritage by the UNESCO. Mount Emei (also known as E Mei Shan) is renowned worldwide for its towering Golden Summit and its four spectacles: The "cloud sea," Emei's magnificent sunrise, the "Buddha rays," and the numerous saint lamps. 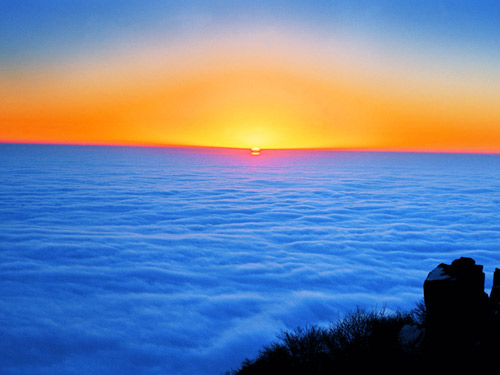 The whole Mt. Emei mountain range extends over 200 kilometers (124 miles) in length and breadth, and has four scenic areas: Baoguo Temple, Wannian Temple, Qingyin Pavilion and Golden Summit. The summit's main peak, called the Golden Summit, towers 3,099 meters (10,167 feet) above the sea level, seemingly reaching into the sky. Every year, scores of tourists put off fatigue and climb to its top just to enjoy the spectacular view - the "cloud sea" buttressing the snow-capped mountain adds mystery and beauty to the the whole scene.

Mount Emei's winding and beautiful stature has been said to resemble a girl's eyebrow, and the evergreen trees and the splendid waterfalls are certainly another reason for you to visit this impressive and tranquil mountain scene. The overall landscape varies with season and even different elevations along the mountain, providing an exceptional "mountain top" travel experience!

Chengdu
⇀ Chengdu
...
Chengdu ⇀ Mount Emei ⇀ Leshan ⇀ Chengdu
2 days
∙ Private ∙
Culture and Heritage
A classic trip to Leshan and Mount Emei only takes 2 days. Leshan Grand Buddha is the biggest sitting Buddha in the world and Mount Emei is one of the four Buddhist Mountains in China.
Add to shortlist
From US$ 280
US$ 254
View tour >

Lhasa
⇀ Chimpu
...
Lhasa ⇀ Tsedang ⇀ Chimpu
7 days
∙ Private ∙
Festival
Travel to Tibet to celebrate the Tibetan New Year - Losar with the locals. Experience Losar with a local family and experience the rich local culture. Explore beyond Lhasa to many near by villages and pilgrim filled monasteries.
Add to shortlist
From € 556
View tour >