Located in Leshan city in Sichuan province and endowed with enthralling natural scenery and numerous Buddhist temples, Mount Emei has been a hot tourist destinations for thousands of visitors to China. It is regarded as the birthplace of Buddhism in the Yangtze Valley and is the highest of China's four holy Buddhist mountains. The major reason accounting for Mount Emei's popularity are its four main scenic locations: Wannian Temple, Qingyin Pavilion, Baoguo Temple and the Golden Summit. 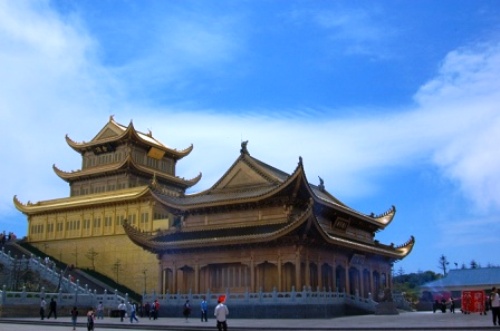 With a history of stretching over a thousand years, Wannian Temple is regarded as one of the oldest temples on Mount Emei. There is a popular legend about the instrument-playing frogs in the temple's rectangle pond, which is said to release pleasant sounds all year round. The Temple complex's "Beamless Hall" demonstrates the exquiste construction of Sichuan's ancients, and the gigantic Puxian Buddha idol, measureing 8.5 meters (28 feet) high and weighing an estimated 62,000 kg (136,686 pounds) is another of Wannian's wonders. Even more astonishing is the alleged "tooth of Buddha," which measures 3.2 cm (1.28 inches) long and weighs 6.5 kg (14.3 pounds)!

Baoguo Temple, originally called Huizong Hall, was built in the Ming Dynasty and renamed Baoguo Temple during the Tang Dynasty. This ancient structure is the oldest of the numerous temples on Mount Emei and serves as the focal point for many Buddhist festivals each year. A well found plot and favorable geographic position facilitates the temple complex's layout, allowing the graceful temple structures to showcase high craftsmanship from days long ago. On top of all that, the large Ming Dynasty bell hanging from the purple copper tower makes the temple feel more peaceful and tranquil when reverberates through the temple.

Qingyin Pavilion means "Pavilion of Pure Sound," and this nod to tranquility was built in the fourth year of Emperor Xi Zong's rule during the Tang Dynasty, in 877. It is an ideal place to calm oneself and take in the stunning views of nature that surround this simple pagoda. The pure sounds of rushing waters falling down the mountain crags, the lush fir trees behind the pavilion, and the emerald-colored twin arch bridges that lie partly hidden and partly visible through Mt. Emei's vegetation intertwine to form a unique picture that's amazing enough to take your breath away! 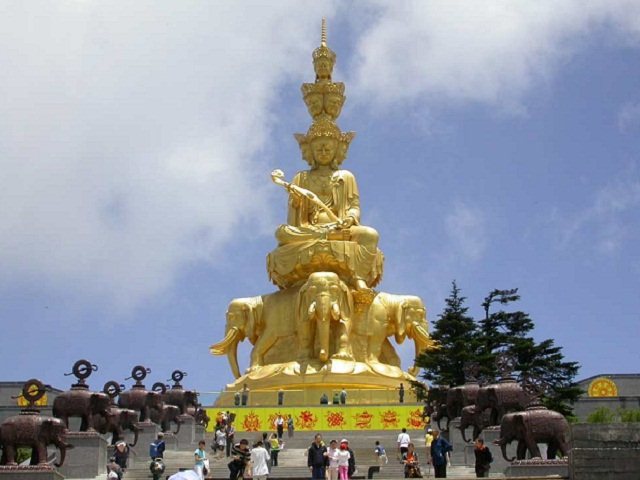 The Golden Summit, the main peak of Mount Emei, is another highlight of this famous mountain. It is highly regarded for its four fascinating spectacles: the Cloud Sea, the amazing sunrise, the "Buddha rays," and the saint lamps.

Every year, scores of visitors climb this holy mountain in spite of fatigue just to enjoy the spectacular view of the sunrise and the cloud sea below. The Buddha rays and saint lamps on the other hand are only encountered by a lucky few who happen to be on the mountain when these puzzling phenomena appear!

It would certainly be a pity for you to visit Sichuan and miss the opportunity to see these four spectacles. Next time you come to Chengdu, make sure to stop at Mount Emei to enjoy and explore this holy Buddhist mountain. It will definitely be an experience that nothing else can hold a candle to!