Up to the challenge of Mount Huashan? It was the mountain where swordsmen used to fight for championship over the entire China Kungfu circle in the ancient times.

Mount Huashan is both famous and infamous - with its steep stairs, awestricken trails, incredibly impressive sunrise and sunset. You can also choose to take the cable car up. No matter how you choose to get to the summit, trekking to the top of Mount Huashan adds great charm to your China adventure. 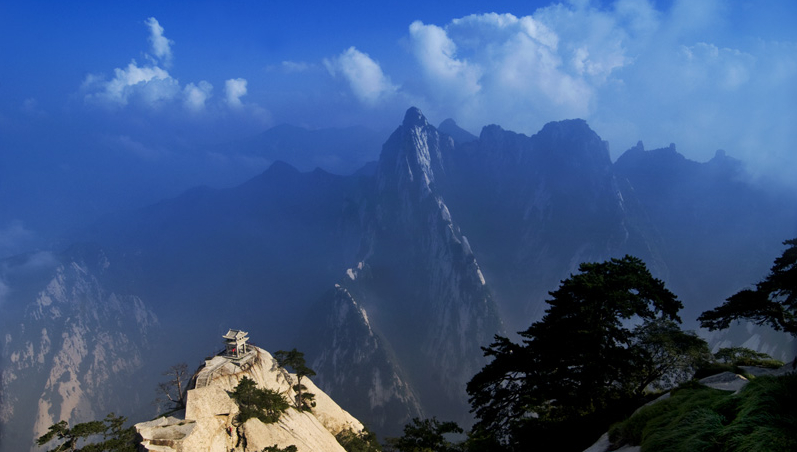 Read over these detailed Huashan travel tips. Learn more about:

Located in Huayin City 120 km. (75 mi.) east of Xi'an in Shaanxi Province, Mount Huashan or Mount Hua in Chinese is known as "The Number One Precipitous Mountain Under Heaven". You can take a train from Xi'an Train Station to Huayin, then jump on a coach to get there. 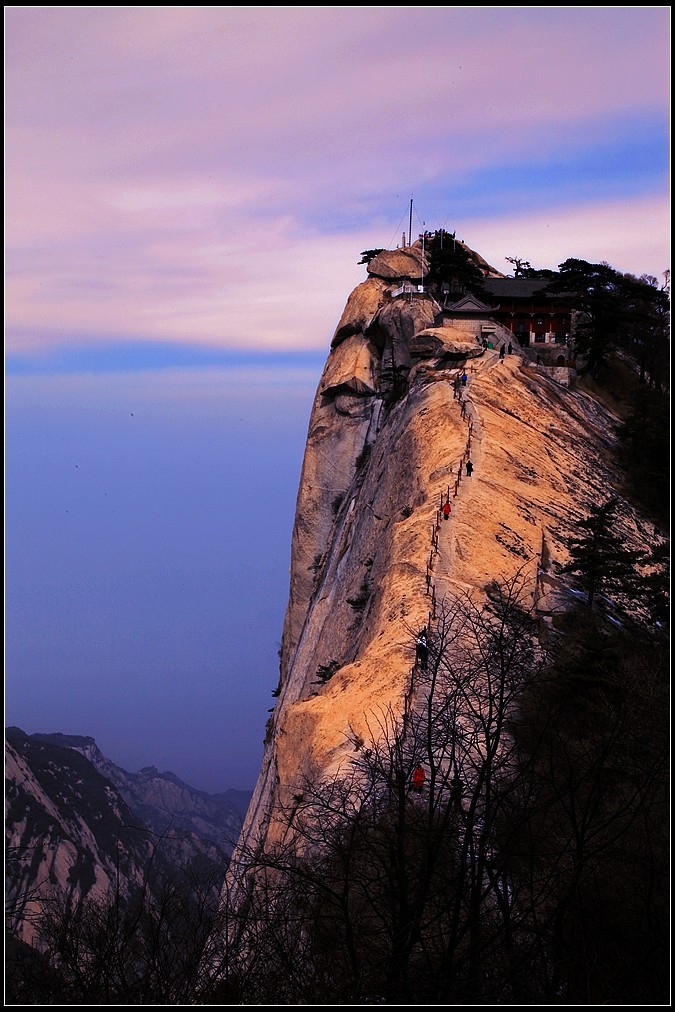 In ancient times, Mount Huashan was called Taihuashan and its name is derived from the wondrous view that the five peaks of it forms the shape of a large flower (Hua in Chinese) seen from a distance.

Standing 2,154.9 m. (7,070 ft.) above sea level, it's well known not only for its narrow and twisted paths, steep crags, and the high mountain range, but also for the fact that it's home to several influential Taoist temples where emperors of past dynasties made pilgrimages, making Mount Huashan the holy land of Taoism.

The best times to visit Mount Huashan is during April to October. The whole mountain is covered with flowers in spring and verdant blanket in summer. The mountain tops would be covered with snow in Winter which is spectacular.

The five famous peaks include the, East, South,West, North and Middle Peaks each earning its name due to its geographic position. There are basic accommodations on the top of these peaks.

On top of the East Peak there is a platform where you can see the stunning sunrise view in the morning. Hence, East Peak is also known as Chaoyangfeng which means facing south in Chinese.

During the filing of the 2010 remake of the Karate Kid movie several key footage was recored at Mount Hua Shan.

When Dre Parker (played by Jaden Smith) and his teacher Mr. Han (played by Jackie Chan) venture on their spiritual journey to find the true essence of Kung Fu. They actual climb (2) different famous mountains within China.

At first, they are shown climbing the endless stairs of Hua Shan. There is then a splendid view from "Five Cloud Peak" on Hua Shan. Before they cut over to the famous temples of Wudang.

Both before and after this block buster was released, many popular Chinese TV series about ancient Kungfu are shoot at Mount Huashan.

Look to find your inner peace from the summit of this spectacular mountain.

Some travelers chose to climb up the mountain all night to see sunrise here. Lights are on along the road. Two heads-up for you if you plan to do so: wear layers that is easy to take off. Bring your jacket with you - the mountain top can be very cold in winter. 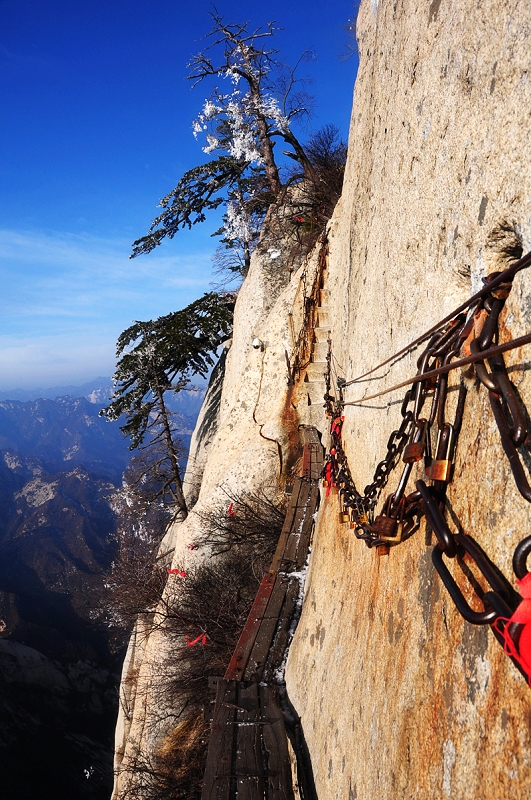 So you do not need to start climbing at 1 o'clock in the morning. Climbing up Mount Huashan requires moderate to hard effort - it is absolutely a huge challenge if you chose not to take cable car.

While standing on East Peak, you are also privileged to see one of the "Eight Scenic Wonders of the Guanzhong Area (the plain area in the middle of Shaanxi Province)"the Immortal's Palm Peak which is formed by the rock veins of the cliffs.

South Peak is the main and highest peak of Mount Huashan. The most unforgettable part in of Mount Huashan is the treacherous Changkong footway of the south Peak. You will also run into daredevils here. Don't be scared though, you can rent safe belt there.

Climbing on its top and looking around at night makes you feel close enough to touch the stars in the sky and the distant mountain ranges rolling out onwards with the major part shrouded in the mist makes it a fairyland.

There you'll also find a renowned Toaist temple: Baidici. West Peak also known as the Lotus Peak, is famous for its lotus-shaped appearance. It is a complete huge rock, towering and precipitous, looking like the masterpiece of nature.

North Peak is well known to people for its variety of scenic spots such as Zhenwu Palace, Jiaogong and Changchun Chambers, Jade Maiden Showcase and so on, all of which are associated with beautiful legends.

Middle Peak also known as the Jade Maiden Peak, is said to be the place where the daughter of Qin Mugong (a ruler of the state of Qin during the Spring and Autumn Period) lived a reclusive life with a young man regardless of the rich family properties endowed by her father.

Huashan sect, a branch of Chuan Chen Tao is frequently mentioned by Chinese people in ancient costume dramas when it comes to Mount Huashan. 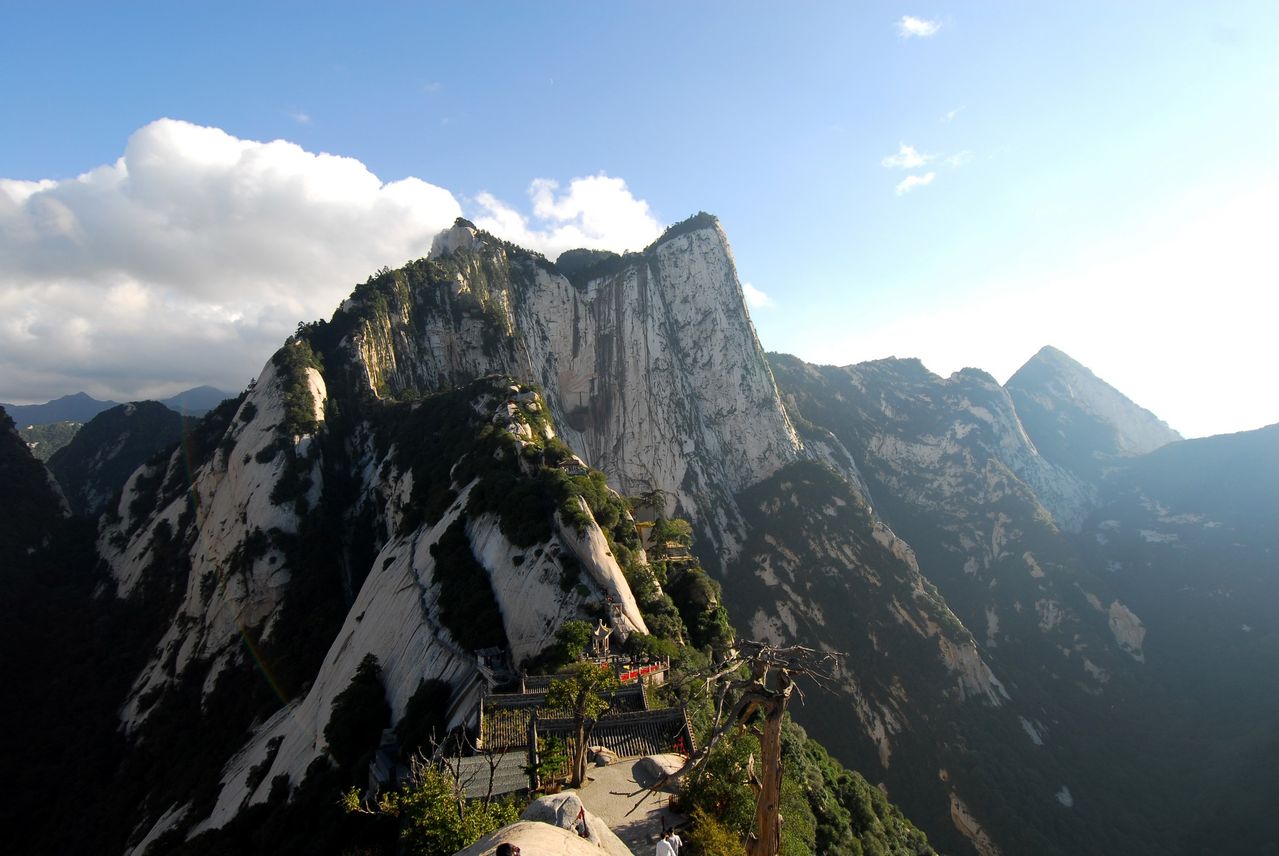 If you have a adventurous trip to Mount Huashan in mind, please wear knee protection - some are reported to have hurt their knees climbing up and down without taking cable car.

Currently there are 3 trails up to these peaks. The main difference is the starting point. The most popular starting point of trekking is the Huashan Tourist Center.

It takes around 6 hours on average to climb up to the East Peak. Will some serious hikers can visit all the 5 peaks in one day, most visitors get to 3 of them.

A visit to Mount Huashan is a once in a life experience. You will never forget its treacherous pass, steep trails, starry night, impressive sunrise and sunset...Get ready for a rewarding challenge to Mount Huashan!

Join Us and Start Your China Tour Today!