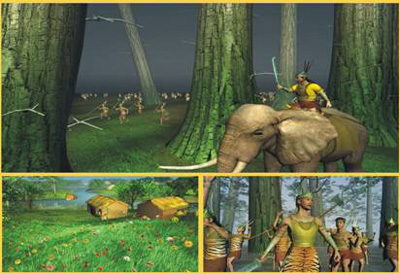 Take a tour of the Jinsha Site Museum for a chance to see the 4D film called "Dream Back to Jinsha." It will take you back more than 3,000 years to the vast fertile land of China's ancient Shu kingdom!

The short film is fun and vivid. The mysterious disappearance of the Jinsha culture is the background of the movie, describing the young hero Duyu who flies through a time tunnel to be transported to Jinsha site more than 3,000 years ago, beginning a journey of fantasy.

This beautiful picture includes scenes of Jiuzhaigou and Jiangnan Water Town. The museum has prepared the 4D cinema to show the splendid culture of the ancient Shu Kingdom , and supposedly the film is a significant step for the Chinese animation industry, having been been produced with all purely hand drawn animation. The movie animation team spent 5 years of painstaking efforts, drawing nearly a million total sketches! In order to capture in four dimensions, a second camera lens was used on dozens of drawings to capture the characters’ vivid facial expressions and movements. As a finishing touch, the soundtrack of the movie boldly combines Asian and Western musical instruments, to create a sometimes powerful, sometimes soft and mild track that flows throughout the "Dream Back to Jinsha" experience.

Tour Chengdu to see this and the city's many other attractions, or venture further afield on your Sichuan tour to see other ancient sites, such as the Sanxingdui Museum.

Hong Kong
⇀ Beijing
...
Hong Kong ⇀ Guilin ⇀ Shanghai ⇀ Xi'an ⇀ Beijing
13 days
∙ Private ∙
1st Time travel to China
This China tour from Hong Kong provides an amazing experiece to learn about China's past, present and future. Feel the tempo of modern life in Hong Kong. Along with exploring the ancient history with a visit to the gardens in Beijing and Suzhou.
Add to shortlist
From ¥ 13,700
View tour >