My brother and I came to the Jinsha Site Museum in the evening, like many of the locals do, because the display is most interesting when the many different colors of lights and lanterns shine brightly in the dark. There were numerous lanterns and different lighting sets - the ones we liked best were the lit dragon and the ivory lights. It almost seemed as if we were back in an ancient time! 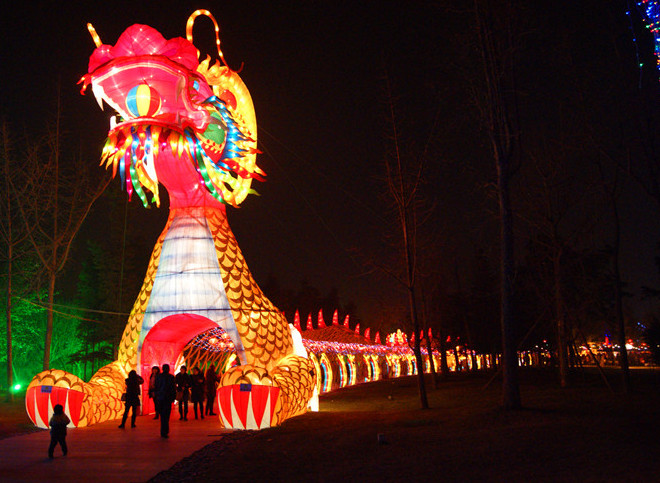 This Chinese dragon light to the left is 14 meters (50 feet) high and over 300 meters (984 feet) long, the longest dragon I've ever seen in my life! Inside the dragon, there were many different colored lights and lanterns hanging, both large and small. Walking through this dragon’s massive body was very exciting, as if we were time-travelling from the ancient to the modern.

In China, the dragon symbolizes good luck, strength and power, and since 2012 is the year of the dragon, it's no wonder this grand dragon of lights was made! 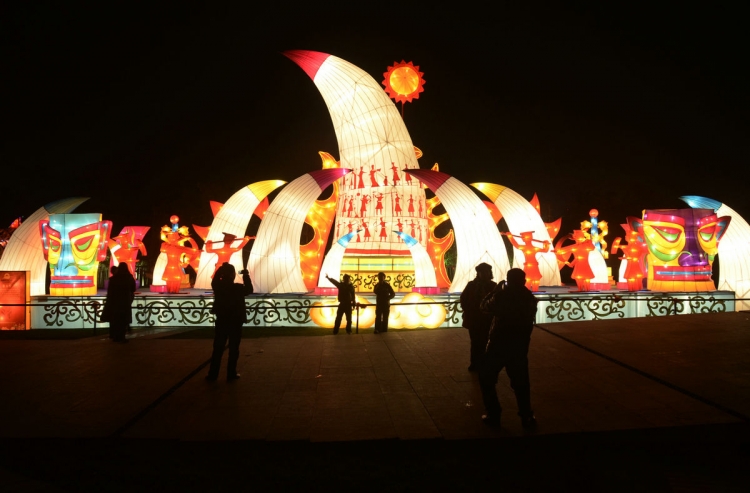 The other display that really grabbed me was a giant ivory light display. The display featured a big ivory tusk is in the middle, with several small tusks surrounding it. A stone plaque nearby says that in 2001, more than 1,000 elephant tusks were unearthed here, which immediately aroused great attention from archeologists. How, since Chengdu's environment is not suitable for elephants, could so many tusks be unearthed?

Some say that the ivory came from central and western Asia, that merchants or pilgrims brought them here. Most people, however, believe that the climate was different on the Chengdu Plain thousands of years ago and that there were elephants living here. Supposedly, a flood brought disaster to the Chengdu Plain long ago, destroying not only the brilliant civilization but also the animals. The belief is that many unwieldy elephants lost their lives in that flood. After that, the survivors collected the ivory tusks as they rebuilt their civilization. Back then, it was believed that elepant tusks could control monsters in the waters, so tusks were used for sacrifices because Chengdu suffered from frequent flooding before the construction of the Dujiangyan Irrigation System.

The Jinsha Sun Festival had many other interesting lights that were really amazing, there just isn't time for me to list them all here. I hope that some year, you too will come to enjoy the great atmosphere of Chinese New Year. If you missed 2012, don’t worry, every year Jinsha site museum has similarly impressive spectacles.

Chengdu
1 day
∙ Private ∙
Panda
A great experience of Chengdu in just one day. Start in the morning to visit the international known Pandas Breading Center, a cuddly symbol of China. In the afternoon be driven to Sanxingdui Museum to explore the mysterious ancient Shu Kingdom.
Add to shortlist
From US$ 82
View tour >