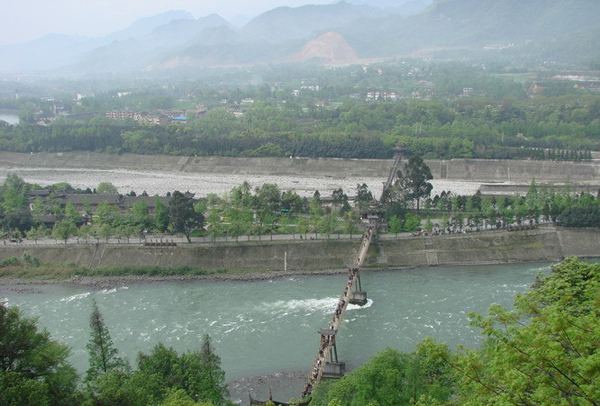 Dujiangyan Irrigation System is the oldest and only surviving no-dam water conservacy project in the world. Honored as the "treasure of Sichuan," it plays a crucial role in preventing flooding, irrigating farmland, and providing water resources for more than 50 cities in the province. The marvel of the project - its ingenious design and elaborate structure which have maintained effectiveness for thousands of years, draw tourists from both China and around the world to the banks of the Mingjiang river for a visit.

The completion of this great project is attributed to an ancient official of Sichuan Province named Li Bing, who first came up with the idea of building an irrigation system to prevent the frequent flooding of the Minjiang River (a tributary of the Yangtze River). Supported by his son and the local people, and through lengthy study and painstaking efforts, the great Dujiangyan Irrigation Project was finally accomplished. The resulting framework has been a constant benefit to the Chengdu region, from ancient times to today.

Dujiangyan Irrigation System consists of three important parts: Yuzui, Feishayan, and Baopingkou, which together are designed to automatically control the water flow of the rivers from the mountains to the plains throughout the year. 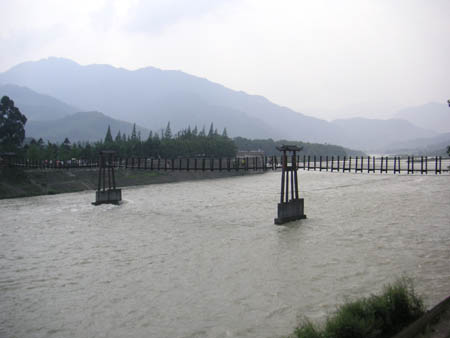 Yuzui is a watershed, like a big fish lying in the center of Minjiang River. It divides the river into two parts: the "inner river" in the east and the "outer river" in the west. The inner river mainly serves to irrigate farmlands, while the outer river is designed to prevent flooding.

Feishayan is a spillway that diverts the sand and stones of the inner river into the outer river, while Baopingkou is a bottleneck used to bring water into the inner river from the Minjiang River. The Baopingkou section also controls the amount of intake water. Together, these three parts interact with each other perfectly to form an effective watercourse. 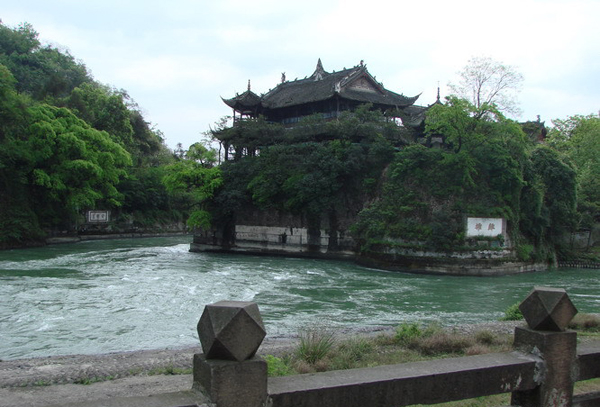 In addition to the irrigation system, other noteworthy structures are the magnificent Anlan Cable Bridge and the Fulong Temple. The Anlan Cable Bridge crosses the Minjiang River above Yuzui and presents a clear layout of the whole Dujiangyan Irrigations System, giving the most scenic view in Dujiangyan. When the bridge was initially constructed before the Song Dynasty (960-1279), wooden blocks were used to build the body of the bridge and bamboo formed the handrails. Today, the wood and bamboo have been replaced with steel and reinforced concrete for safety.

Legend says that Fulong Temple is the place where Li Bing defeated the evil dragon during the construction of the irrigation project. In the courtyard of the temple stands the earliest round sculptured stone statue in China, a statue of Li Bing caved in the Eastern Han Dynasty (25AD-220AD).

Dujiangyan Irrigations System opens from 09:00 to 17:30 and the admission fee is 90 RMB per person.

Chengdu
5 days
∙ Private ∙
Trekking & Biking
Enjoy the breathtaking scenery of Songpan in the highlands of norther Sichuan. Experience the life of the local Tibetan people as you ride into the woods. This unique horse riding experience adds to any Sichuan trip.
Add to shortlist
From ¥ 3,100
View tour >