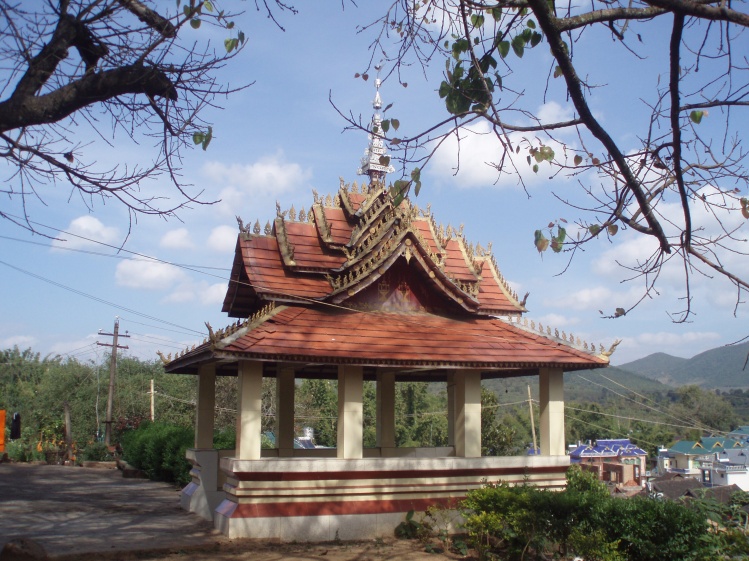 Regarded as a Yunnan must see, Jingzhen Octagonal Pavilion is a famous ancient architecture in Xishuangbanna and is a typical representative of the superb workmanship of the Dai ethnic people in Yunnan Province. Located on the Jingzhen Hill 14 km. (9 mi.) west of Menghai County, it is one part of Central Buddhist temples in Jingzhen. It is featured by its unique Chinese and Southeastern architectural style, being regarded as a cultural heritage and religious holy land in the local people's hearts.

The history of the Jingzhen Octagonal Pavilion can be dated back to the year 1701 built by the local Han and Dai people. It was originally used as a Buddhist meeting chamber to remember the Sakymuni, who was regarded as the fore father of the Buddhism. Though with some many years' exposure to wind and rain, it still haven't lose its once glory and grandness. Nowadays the pavilion is more than 20 m. (66 ft.) high and consists of three parts: the base, the body and the roof, which was built on a brick and wooden structure.

The base is was made up of multi-angular walls, with 16 columns and four doors standing at each angel.  When we go nearer, we will find that all the doors, columns and ceiling are exquisitely caved with relieves or gilt pictures, which are of different theme, such as lions, tigers and elephants and can  perfectly reflect a distinct ethnical feature. Moreover, there has studded with lots of small pieces of mirrors and colorful glass on the exterior surface of the pavilion, which makes the pavilion flickeringly beautiful in the sun. 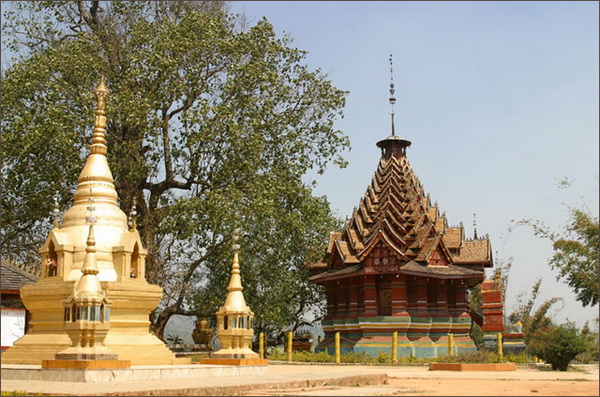 When entering into the pavilion, we will find that in a niche above the vaulted frontispiece there is a cooper statue of Sakyamuni, which can perfectly reflect the uncanny workmanship of the ancient Bai people. This pavilion is also featured by its delicate roof with ten layers of eaves ranging in depressive sizes from the bottom up. It is exquisitely decorated with small golden pagodas, beasts and flame-shaped glass and copper bells dangling from beneath the eaves.

The exquisite and elegant Jingzhen Octagonal Pavilion is an elaborate work of the Dai ethnic groups. If you are traveling in Xishuangbanna and are interested in architecture, don't miss this attraction. The entrance fee is 10 RMB and you can take a bus from the Jinghong County here directly.