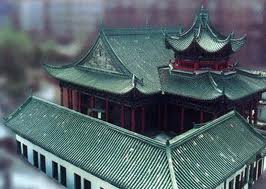 Situated in the north of Jianzhong road in Urumqi City in China's northest Xinjiang province. Shaanxi Great Mosque is the largest Islamic mosque in the city and can accommodate over 1,000 people worshiping here.

Qing Dynasty and renovated for many times, the mosque now cover an area of 5186 sq.m. (1.28 ac.) It is regarded as one of Chinese historical heritage under the protection of the government and has attracted many tourists and worshiper here.

The Urumqi Shaanxi Great Mosque features by its Traditional court-yard buildings, with the Palace in the west as its major building. Different from other Islamic mosques in Urumqi, this Mosque stands out for its unique architectural style.

The Palace boasts its Chinese traditional brick and wooden architecture style and glazed tile roof. The main hall is supported by 40 beautiful and grand vermilion pillars. On the archway you will find exquisitely caved words from the Koran, which may give you a shock.

Behind the Palace, there is a octagonal pavilion for the imams to see the moon and to declare the fast. In the front of the Palace there is a Spacious courtyard and several halls surrounded for the use of lecture room, bathing room or educational area of the Imam.

​The Urumqi Shaanxi Great Mosque was an important patriotism educational and antiwar-supporting center of Xinjiang Uygur Autonomous Region during the anti-Japanese war period.

Nowadays it has been renovated to its once glory and many Muslims come to here to do religious activities. The Islamic association of Urumqi has also taken its site in this mosque.

Whether you are interested in the Islam or not, spend half a day here, you can savor the great combination of religious atmosphere and great fun of tourism.