In the year 713, during China's Tang Dynasty (618 – 907A.D.), a monk named Hai Tong initiated an ambitious project to carve a giant statue of the Buddha overlooking a confluence of rivers in Sichuan province, so as to suppress a water spirit which was believed to be causing numerous boat accidents in the region. Upon completion of the project, well after Hai Tong's death, the massive Buddha sculpture stood as the largest stone Buddha idol in the world and so remains to this day.

Located to the east of Leshan city in the southern part of Sichuan province, at the confluence of the Min, Qingyi, and Dadu Rivers, the Leshan Giant Buddha is widely known throughout China and around the world. The Giant Buddha idol took more than 90 years of hard work to accomplish and is a bright star on the UNESCO World Heritage site list. 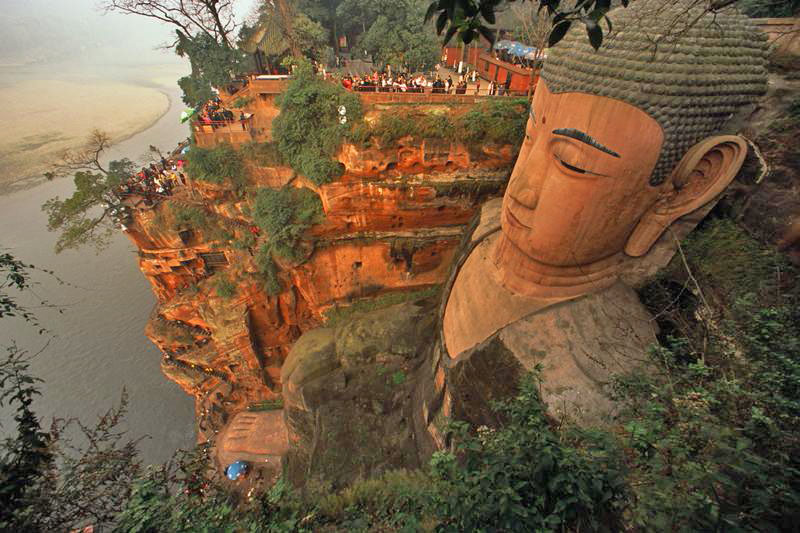 Facing the river, the Buddha sits with beautifully captured solemn stillness and in a symmetrical posture, overlooking the waters. Overall, the sculpture is 71 meters (232 feet) high and has fingers measuring three meters (9.8 feet) long! The eight meter (26 feet) long instep on the bottom of each foot is big enough for 100 people to sit on, and the 28 meter (92 feet) wide shoulder span would be large enough for a full basketball court!

It was said that the initiator, Hai Tong, had a hard time gathering funds for building the grand Buddha. He begged alms for 20 years, until he finally had enough to launch the project. When some local officials attempted to coerce from Hai Tong the money he had raised for the project, he boldly announced that they could have his eyes but not the money raised for the Buddha, and after Hai Tong dug out his own eye to show his resolve, the officials fled in fear. At the time of Hai Tong's death, the project was still only half done, and two of his disciples continued the work.

The Leshan Giant Buddha can be said to be the culmination of thousands of workers' painstaking efforts and wisdom. As a result, it has been carefully maintained and preserved since the time of its completion. Despite local efforts at preservation over the years, prior to 1963 the scuplture had nearly been completely destroyed by erosion from wind and rain. At that time, the Chinese government took over restoration efforts and the maintenance work continues today under the supervision of experts from UNESCO.

This wonderful Sichuan attraction is 162 kilometers (101 miles) from Chengdu to Leshan by the expressway, and it takes 2 hours of driving to reach from the heart of Sichuan's capital.

Lhasa
⇀ Lhasa
...
Lhasa ⇀ Gyantse ⇀ Shigatse ⇀ Lhasa
6 days
∙
Group, maximum of 12 person(s)
∙
Culture and Heritage
Enjoy an awe-inspiring tour to explore the Tibetan culture and history with a visits to Lhasa's Potala Palace and Tashilunpo Monastery in Shigatse. Along the way you will be immersed into the breathtaking scenery of Yamdrok Lake and beyond.
Add to shortlist
From ¥ 4,550
View tour >