Last weekend I experienced a Chinese Wedding in Chengdu, being from the UK, I did not know what to expect. As a safe bet, I showed up in a suit anticipating that everyone would be in suits. However, to my amazement, all were dressed in a casual manner. Jeans and a shirt. Luckily the bride and groom were wearing that of more of a western tradition. The appropriate suit for the groom and the classic white wedding dress for the bride. The event proceeded with taking vows and seemed as if it was a show put on for our entertainment; no complaints on that.

Chinese marriage was created between 400 to 200BC and has six rituals known as the three letters and six etiquettes. I wonder if this was followed out by the couple.

The next was the birth dates. This is when the matchmaker would take the birthdays of both the potential bride and groom, and with some crazy formula of fortune telling, work out if they were a good match. By good match, I mean, would they have good fortune. If the result was bad, then there would be no marriage. If the result was good, you have one lucky son.

If you were fortunate enough to get past stage two, then there would be betrothal gifts to the bride. This is when the parents of the groom would send the bride some gifts, along with the betrothal letter to the bride’s family. This then leads nicely to the next etiquette of wedding gifts sent from the groom’s family to the the bride’s family. These usually included an array of food, cakes and religious items. I suppose the richer the groom’s parents the better the gifts.

Then the wedding date would be arranged from the Tung Shin (Chinese Lunar Calender). Again the ideal of selecting a good date would secure a good future for the couple. When the date was secured and it finally came to the wedding ceremony. This is where all that hard work pays off and the couple finally wed. However, this is probably hardest part of a wedding.

At the wedding I went to it consisted of a huge meal displayed on tables around you. Nothing like wedding food. However the food would have to wait, for the ceremony begins before the meal. It consisted of the sharing of vows. The wedding ring placed on the brides finger. The usual sort of thing you see at a wedding. However, there was an old Chinese tradition upheld. This where tea, held in both hands, was offered by the bride to her parents kneeling down . This was to pay respect for raising her. Then the bride would then offer tea to the father of the groom and kneel again. While the groom knelt in front of his mother offering tea. In return of this the couple would receive red envelopes from the people invited containing money or jewelery, or both.

So next time when in China try and get yourself invited to a Chinese wedding. They are a nice way to spend the day. Meet new people, eat some delicious food and drink some wine. What more can you ask? Thank you WindhorseTour for a most enjoyable day. 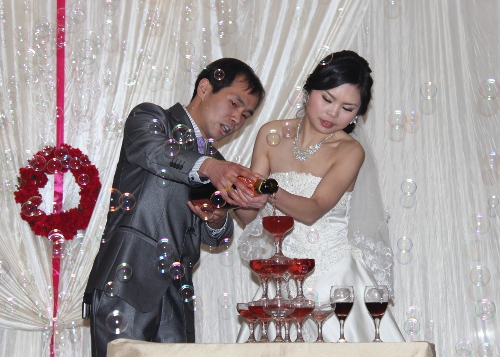 Thank you Mo that was very informative... I have learned a lot about the Chinese Wedding Traditions and this might explain the HSBC advert where an elderly Chinese man is handing out red envelopes (although to his grandchildren I believe).
Kind Regards,
Vlad