Manting Park, boasting a history of 1,300 years, is famous for its natural scenery, ethnic architectural buildings and rich fork custom, which make this park an incomparable place for leisure and for fun.

Situated 2 km. (6.7 mi.) away from the downtown area of the Jinghong City, the capital of Xishuangbanna Dai Autonomous Prefecture. 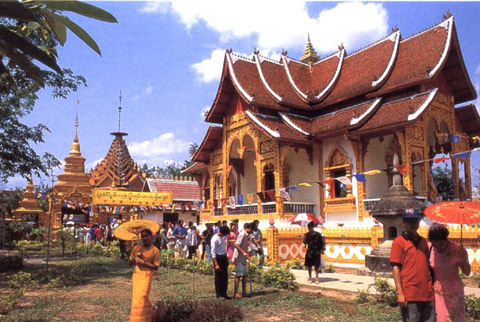 As a ancient Dai Imperial Garden, the Manting Park was originally used as a place for royal families to relax and enjoy themselves.

It has another name called "Chunhua Park", which means the park is so enchanting that you will lose your soul by its charming scenic spots.

It is said that once the Leader of the Dai ethnic group paid a visit to the garden with his princess, but the princess was so fascinated by the beauty of the park that she lost her soul, thus the park getting its name.

When entering into the park, you are presented with a bronze statue of Premier Zhou Enlai, which was built in honor of his great contribution to the development of Dai ethnic group.

You can also find two Banyan trees besides the statue, which were planted by the princess of Thailand as a symbol of the good relationship between China and Thailand. 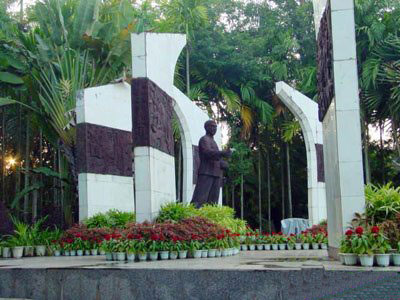 There are also many other attractions that make the Manting Park stand out. There is a Buddhist temple in the back of the park which was the most important place for worship in Xishuangbanna.

As a former royal park, its natural scenic spot is incomparable and all thee buildings here are of unique Dai architectural style. Moreover, tourists can also enjoy the peacock show and elephants performance, which will surely enable you to savor the ethnic custom in the tropical zone.

When the night falls, this park will be more enchanting with bonfire party held every day.

If you come here, you can have the chance to dress the ethnic costumes and watch the dancing and singing around the bonfire, which will surely leave an unforgettable impression on you.

Final travel tips for you: admission is 30 RMB (5 USD) for adults ad 15 RMB (2.5 USD) for Children. What are you waiting for? Savor the great combination of the Dai ethnic cultural and natural scenery!