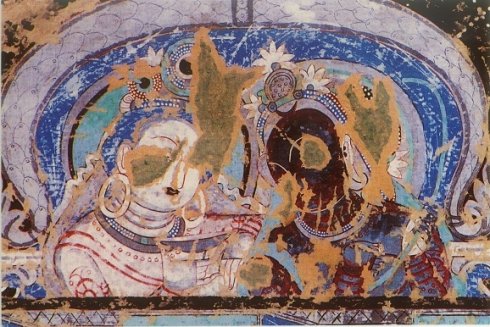 Kizil Thousand Buddha Caves, also known as Kizil Grottos, is a set of 236 Buddhist rock-cut caves located 69 k.m east of Kuche city, in Xinjiang. It's listed as a key cultural site under national protection in 1961. The Caves was the first one to be excavated (as early as the 3rd century B.C.) and situated in the western most position. It is the origin of Qiuci (龟兹: an ancient state) grotto art and plays an important part in Buddhist art in Central Asia and Middle East due to its fine craftsmanship in cave architecture, sculpture, and fresco.

Kizil Thousand Buddha Caves currently preserves mural paintings of 10,000 sq.m. upon which you'll find those vivid figures like flying Apsaras, Bodhisattva, arhat and Jiyuetian (伎乐天: a musical artist playing in heavenly palace) as well as a large quantity of folk painting presenting the life of ancient people. As a result, some experts consider it as the second Dunhuang (敦煌) in China in terms of fresco art. 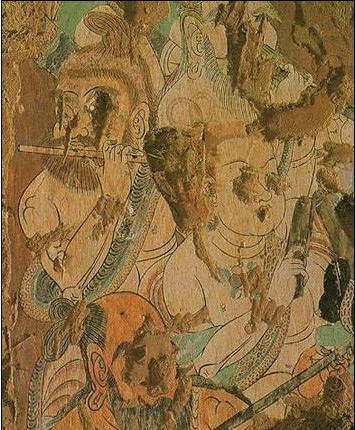 The most impressive fresco is the one in Cave No.17 which is covered completely by the vivid paintings including the grotto top and the niche lintel. This eye-catching fresco depicts for the viewers several figures and implies the close relationship between merchants and Buddhist monks on the Silk Road back at that historial period. Besides, No.38 Cave, also known as the Musical Cave displays 20 musicians each playing a different musical instrument showing us a properous Qiuci ancient state.

Next to Kizil Thousand Buddha Caves in a deep and serene valley, there is a famous spring named Qianleiquan (千泪泉) from where goes a legend for the Caves:

Long, long ago, the charming princess of Qiuci ancient state went hunting alone in the mountain and accidentally ran into a handsome, valiant young man. They fell in love at first sight and the young man proposed a marriage in front of Qiuci king. However, the king didn't agree to marry his deer daughter to him unless he could dig out a thousand caves in the mountain within three years. The young man went home and worked day and night in the mountain to meet the king's condition. Unfortunately, he died from tiredness before he could finish digging the last cave. Learning the bad news, the princess rushed to his side and cried her eyes out. In the end, the princess turned into a rock dripping water year in and year out. That's how the famous spring, Qianleiquan, is formed.

Beijing
⇀ Shanghai
...
Beijing ⇀ Xi'an ⇀ Jiuzhaigou ⇀ Chengdu ⇀ Guilin ⇀ Shanghai
15 days
∙ Private ∙
Natural scenery
This China sightseeing tour balances a time to relax yourself in the beautiful scenery of Jiuzhaigou and Guilin. Along with a memorable experience to discover the past, present and future of China in Beijing, Shanghai, and much more.
Add to shortlist
From ¥ 16,000
View tour >