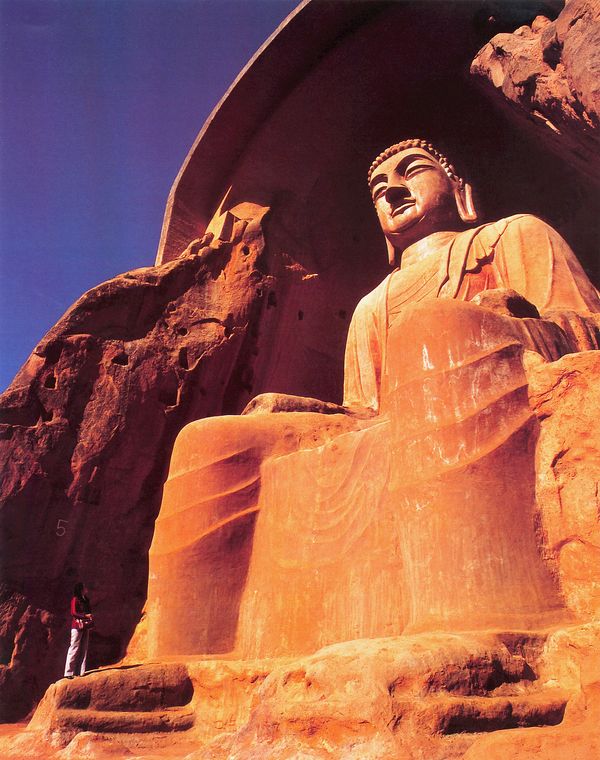 Xumishan Grottoes is a precious treasure of Buddhism. It is composed of 162 caves with 350 Buddhist statues, 12 inscriptions in Tibetan language, 3 stone carvings, 11 steles and many mural paintings.

Unlike other grottoes in China, Xumishan Grottoes has its caves chiseled on the cliffs of eight separate peaks and the distribution of these caves take a shape of a fan.

"Xumi" is the transliteration of a Sanskrit word meaning "treasure mountain", a famous mountain in Indian legend and "shan" means mountain in Chinese.

Travel tips - history. Dating back to more than 4,000 years ago, Xumishan Grottoes was initially chiseled during Northern Wei Dynasty and was named Fengyi Mountain.

In Tang Dynasty and its following dynasties, it was called Jingyun Temple until in Song Dynasty when it was renamed Xumishan Grottoes as what we call today.

Once you reach the scenic spot, you'll see an arresting giant Maitreya Buddha sitting in front of the entrance in a horseshoe-shaped cave chiseled in 849 during the Tang Dynasty.

It is 20.6 m. (68 ft.) in height, higher even than the one sitting in the nineteenth cave of Yungang Grottoes and the highest Lusena Buddha in Longmen Grottoes.

The ears of the Buddha is as high as two persons and the diameter of its eyes is as long as one meters.

Walking near in its front makes you feel like standing under a five- or six-floor building. The Buddha wears a cassock and a solemn facial expression demonstrating the consummate skills of ancient craftsmen.

At present, cave No 45 and No 49 built in Northern Zhou Dynasty boast the largest number of Buddhist statues. Usually, you'll find a Buddha and a Budhisattva in each of the cave.

The decorative carvings like the curtains of the niche, the tassels carved on its side, those small Buddhas on top of it and the gigakus under playing all kinds of musical instruments all are treasured works of art showing the quintessence of carving skills in ancient times. 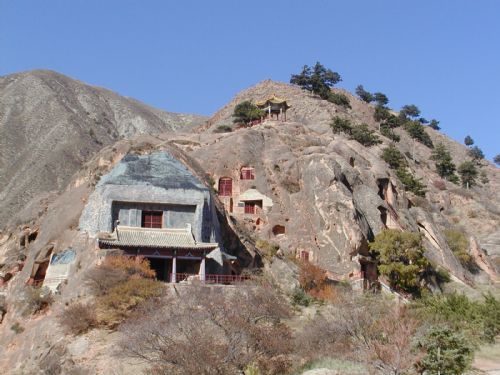 Across from Xumishan Grottoes, there are lots of rural inns that serve delicious local food and comfortable accommodations.