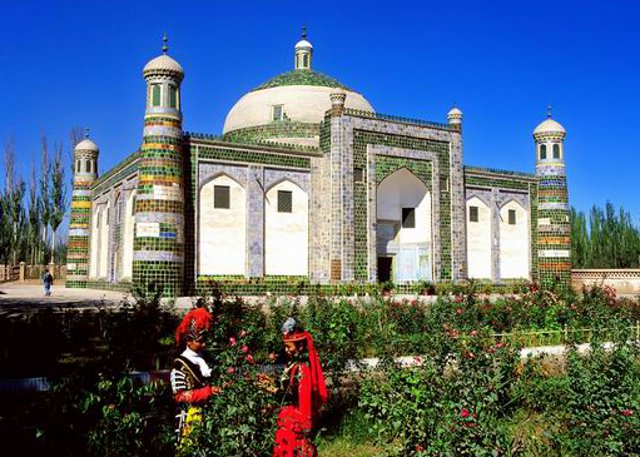 Abakh Khoja Tomb is an important attraction in Kashgar City, which is regarded as the gorgeous emerald in Xinjiang as it lies between the vast Gobi desert and lofty snow mountains.

Located 5 km. (3 mi.) from the Kashgar city, the Abakh Khoja tomb is a typical Islamic architecture and an Islamic holy mausoleum.

Covering an area of 2 hectares (4.9 ac.), it is an important religious site and famous cultural heritage under the protection of the government.

It is said that there are in total 72 people from one families buried in the Abakh Khoja tomb and the most famous one is Parhan, a descendant of Abakh Khoja (in China also known as Xiangfei), the only Uyghur imperial concubine among the 41 wives of Emperor Qianlong in the Qing Dynasty.

Legend shows that Parhan can emit enchanting fragrance from her body without using any perfume, so she was called “Xiangfei”.

She was married to Beijing as Qianlong' s concubine to gain peace of her hometown. She stayed in Beijing for 28 years and died because of illness. Qianlong loved her so much and then sent her to be buried in her hometown Kashgar. 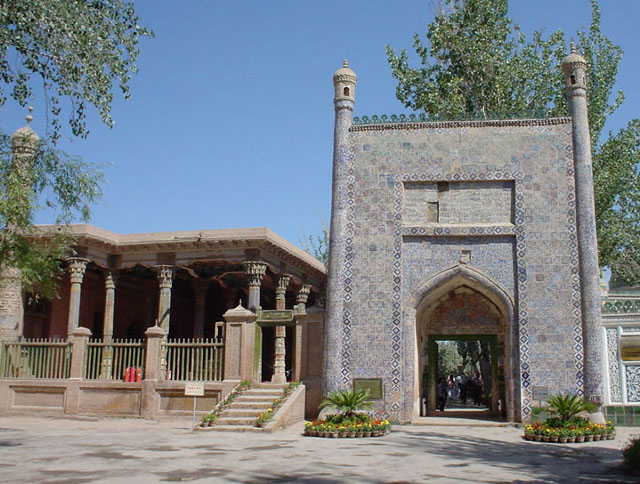 The Abakh Khoja tomb looks like a splendid imperil palace with the height of 40 m. (131 ft.). This Islamic architecture is made of of 5 parts: the gatehouse, the small worship hall, the big worship hall, the Doctrine-Teaching Hall, the main tomb chamber.

On the top of the vaulted dome there is a exquisitely caved tower on top of which there is a gold plated crescent shining brightly and leaving a solemn atmosphere for the tomb.

In the main tomb chamber, there is a platform to place the 72 tombs. Xiangfei' s tomb is in the northeast of the platform with Chinese and Uyghur to show her status.

There are also many carved design in the mausoleum and behind the mausoleum and there are vast of tombs showing a gorgeous sight to this area. Xiangfei and her families was memorized and admired for their contribution to maintain the unity of nationality and the country.

Moreover, the legendary love story of Xiangfei has attracted many people from home and aboard. We recommend 2 to 3 hours here to enjoy the great combination of architectural building and cultural heritage.