This monastery is a 'must-see' for visitors to Tibet. The monastery lies 130 kilometers (80 miles) southwest of Shigatse. Sakya, meaning 'Grey Soil' in Tibetan since the soil surrounding it is gray. It is the central monastery of the Sakyapa sect of Tibetan Buddhism. Its walls were painted in red, white and grey stripes, which represent Manjushri, Avalokiteshvara, and Vajrapani respectively. Since the monastery has a colossal collection of highly valuable art pieces, it is deemed as the 'Second Dunhuang'. The Drum River divides it into the Northern Monastery and the Southern Monastery.

Established first, the Northern monastery was founded by Khon Konchog Gyalpo in 1073, from which Sakyapa rose and once ruled Tibet. Unfortunately, it is nothing but ruins now due to its severe destruction during the Cultural Revolution (1966-1976). However, the ruins still reflect its glory and splendor.

The fifth Sakya Throne Holder, Drogon Chogyal Phakpa, known as Phakpa, built the Southern Monastery in 1268. Phakpa was the spiritual guide of Kublai khan, a Mongolian Chinese emperor who granted Phakpa secular and religious authority over Tibet. After Phakpa, Sakyapa ruled over 100 years in Tibet. The Southern Monastery remains in better condition. A typical Mongolian structure, the fortress-like monastery covers a space of 45,000 square meters and is surrounded by a moat, and has an outer wall and inner wall. With fortifications and battlements atop, it has only one entrance on the east. 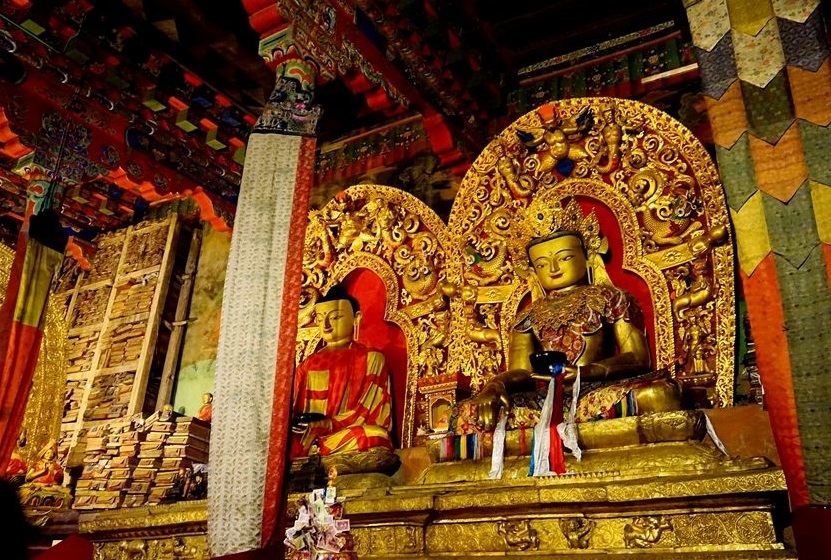 The Sakya Monastery is one of the few places where you can feel that the monastery and residents are so unified and blending. Sakya is not like other temples and towns that sit on the China-Nepal highway and can be visited by the way. Sakya is far away from the highway. Therefore, it is a more quintessentially religious atmosphere.

Lakhang Chenmo, the Main Chanting Hall, is the central structure of Sakya's inner courtyard. The hall, measuring 5,700 square meters, has 40 huge pillars, four of which are 1.2 meters (4 feet) in diameter. Legend tells us that the four pillars were carried and presented by a Chinese Emperor, a tiger, the Nereus, and a wild yak. Wall murals in the hall depict the stories about the pillars. Besides statues of Buddhas, the hall houses the greatest religious library in Tibet, containing tens of thousands of sutras written in Tibetan, Chinese, Mongolian, and Sanskrit. Among them, two sutras named Kanjur and Tanjur were written in ink produced from ground gold powder. In the chapel west of the hall mandala-making techniques are taught. Ngudung Lakhang, or the North Chapel, houses 11 silver-wrapped stupas of former Sakyapa Throne Holders. Pukang, the Manjushri Chapel, contains a Jowo Shakyamuni, a Manjushri and other statues.

Murals, Sakya monastery has countless murals, mostly of the Yuan dynasty (1271-1368). There are more than 3,000 exquisite murals covering a wide range of subjects including religion, history, culture, and social life. Among them, murals of mandalas and former Sakya Throne Holders are the most outstanding. The Sakyapa sect allows marriage and its religious power is descended from paternal uncle to nephew while its political authority from father to son. Sakya's collection of treasures also contains 3,000 pieces of pattern sutras written in Tibetan, Chinese, Mongolian and Sanskrit which cover a wide range of knowledge; other artifacts such as seals, crowns, robes, Buddhist vessels and statues bestowed by emperors of the Yuan Dynasty are also on display there.

Events and ceremonies, the Sakya Monastery holds a large number of events and ceremonies every year, the most important of which are: the Tibetan calendar holds a Rainy Festival every May; in July and November hold the Summer and Winter ceremonies and Tibetan Cham Dancing. The Cham dance is a Tibetan Buddhist ritual dance performed by monks and accompanied by traditional music instruments. The cham dance is usually performed in front of large audiences during the Monlam Prayer Festival, a sacred festival in the Tibetan calendar.