Looking back over the span of China's 5,000 year history, there are two poets who are regarded with the most respect: Libai and Du Fu. Libai is often honored as the 'god of poetry,' while Du Fu is called the 'saint of poetry.' This complex of thatched cottages in Chengdu where Du Fu spent one of the most prolific periods of his life writing poetry, therefore, is an ideal place for people nowadays to step into his world and admire his outstanding works.

Du Fu lived in the Tang Dynasty (618-907), a bountiful period of poetry in China's history. During that time, what is now the province of Sichuan was the ancient Shu kingdom and Chengdu was the capital. Du Fu moved to Chengdu and built a complex of thatched cottages as a retreat. Chinese history records that during his 4 year stay in the Shu kingdom, Du Fu composed more than 240 poems. Most of the poems describe his deep concern for the country, and today they are still widely popular among the Chinese people and considered to be national treasures. 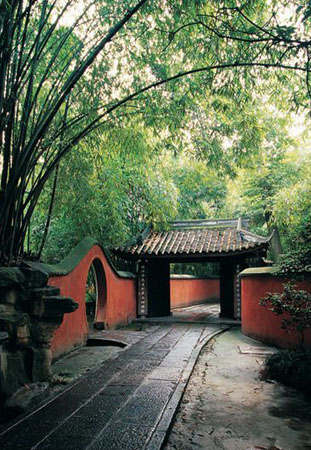 Covering an area of 24 hectares (60 acres), the complex also contains two other important structures: the Fan'an Temple on the east side and the Plum Garden on the west, both of which bear the architectural style of the Qing Dynasty (1644-1911). Around the complex buildings is a broad natural area and collection of gardens.

Apart from the historical elements, visitors will also enjoy the beautiful and peaceful scenery inside: the winding streams, interwoven bridges and pavilions, the flourishing plum trees and bamboos, all overlaid with a variety of flowers blooming at different points througout the year. This is one of Chengdu's best green spaces and is a wonderful retreat from the urban surroundings.