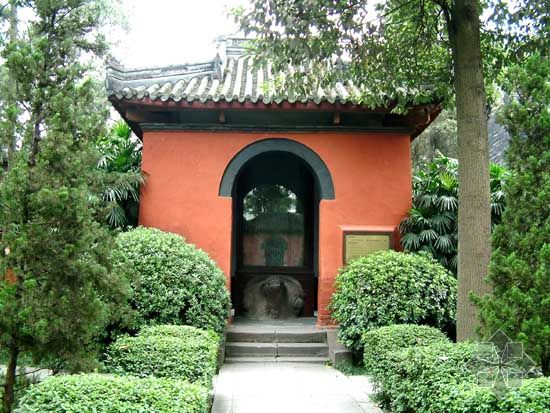 First constructed in the Jin dynasty (6th century A.D.), Wuhou Temple was built as a way to memorialize these great statesman and has now become a shrine for people to show their respect and admiration of these two leaders of the Shu kingdom. Wuhou Temple is located to the southwest of downtown Chengdu and covers an area of 150,000 sq m (1,614,586 sq ft). The temple structure is made up of five parts: the front door, the second door, the Liu Bei Palace, the Mid Hall, the Zhuge Liang Palace, and the tomb of Liu Bei.

Zhuge Liang was the prime minister of the Shu kingdom, in what is modern-day Sichuan province, during the Three Kingdom Period of Chinese history. Zhuge Liang established himself as a competent strategist and statesman who helped the Shu kingdom win many decisive battles and establish itself as the regional power in southwest China.

Liu Bei, king of Shu and famous figure in the Chinese classic The Romance of the Three Kingdoms, was the first to recognize Zhuge Liang's abilities and promoted by him into his court. In fact, the historical event of Liu Bei paying a visit to Zhuge Liang in his cottage has become a household story in China, teaching that talent will be recognized and rewarded. Together, these two men created a legendary kingdom whose reputation endures in China to this day.

Inside Wuhou Temple, visitors are given an introduction to the luminous culture of the Shu kingdom. At the same time, the statues of Liu Bei and Zhuge Liang together in the the same temple are a reminder to those familiar with the story of how the emperor met his minister and understudy, and how the minister served his emperor devotedly.

The Wuhou Temple complex also houses a precious cultural relic called the Triple-Success Stele, another popular stop for visitors. Built in 809, the stele is 367 centimeters (144 inches) high and 95 centimeters (37 inches) wide, and is so named the Triple-Success Stele because it includes three valuable Chinese historical relics: an article written by Pei Du, a famous minister of the Tang Dynasty who served four emperors in succession, calligraphy by Liu Gongquan, one of the most eminent calligraphers in Chinese history, and a statement about the morality and achievements of Zhuge Liang.

Come see this expansive memorial to some of the great men and works that helped establish the Shu Kingdom as one of ancient China's greatest territories, and contributed to the prominence that Chengdu enjoys even to this day.

Jiayuguan
6 days
∙ Private ∙
Family focused
A 6 day adventure deep into the best scenery of northern Sichuan. Balanced between horse riding in the snow-capped mountains of Songpan, to the magical blue / green lakes of Jiuzhaigou, and the rushing waterfall of Huanglong National Park.
Add to shortlist
From A$ 883
View tour >

Chengdu
1 day
∙ Private ∙
Culture and Heritage
Chengdu is known as the "Heavenly State", filled with surprises, attractions and food. Spend 1 day to visit Chengdu highlights including temples, monastery and secret venues. Taste local snacks and the delicious food that all China raves about.
Add to shortlist
From £ 63
£ 57
View tour >