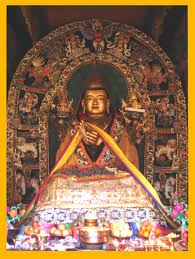 Ta' er Monastery, famous as a religious site of Shamanism, is located 25 km.(16 mi.) southwest of Xining City of Qinghai Province. It is the largest Buddhist monastery in Qinghai, and an important center to do religious activities.

Built in 1379 and covering an area of 600 acres, nowadays it is not only well known as a holy land for Buddhists and Shamanists but also for its cultural heritage and grand architectural buildings.

Ta' er Monastery, meaning the Maitreya Buddha Temple with one hundred thousand roaring lions in Tibetan, got its name from a historical man called Tsongkhapa, who invented the Shamanism.

It is said that Tsongkhapa was born very clever and went to Tibet to learn Buddhism in his 16. He want to reform the Tibetan Buddhism and created Shamanism. He is so busy doing his career and his mother missed him very much and asked him back to home.

But he don't want to quit his business and said if there would be monastery in his hometown he could come back.  At last, his families built the early monastery for him and it became a place for him to spread his theory of Shamanism.

If you come to the Ta' er Monastery,  you will feel fantastic with the exquisitely caved objects and grand architectural building just from the outside. From a far distance, you can see golden tiles house, scripture hall, and a pagoda standing in front of the monastery, which leaving a splendid sight for the area.

The Big Scripture Hall in the monastery has adopted the civil structures of Tibetan style and has the largest scale among buildings in the Monastery. When you enter into it, you will find exquisitely cave pillars, cultural relics of Tibetan and golden pagodas, clocks which leaving this monastery a splendid sight. If you are interested in Architecture, don't miss the place. 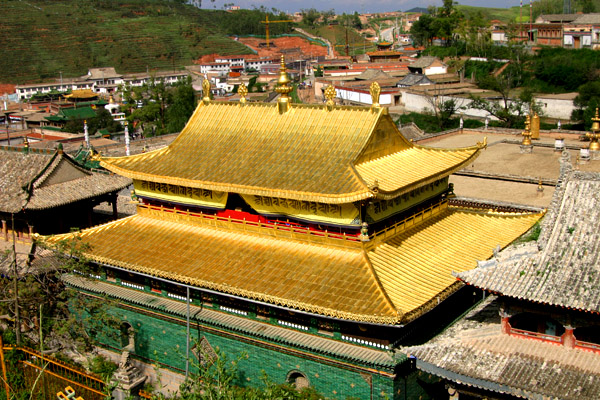 Another thing that there are many precious collections in the Monastery. One things that will surely draw your attention is the mural and the barbola.

When you enter into the hall, you are presented with the all kinds of painting on the walls, clothes or pillars. All the delicate painting takes its theme from the Shamanism or Buddhism, which will appeal to those interested in Religion.

Moreover, the barbola is the unique arts of Tibetan and is famous for exquisite artsmanship, vivid painted people, bird and beautiful colors used. If you haven't seen any things about these things, the Qinghai Monastery will satisfy your needs. 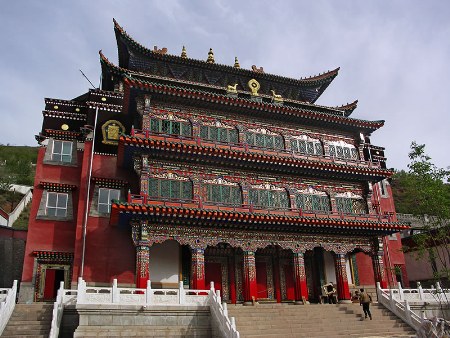 Nowadays, the Qinghai Monastery has been developed into a tourism place and has attracted many tourists from home and abroad. Every year, there are even Buddha exhibiting day to celebrate this monastery and ethnic dancing and singing at that time.

If you want to travel to Qinghai, the Qinghai Monastery is surely one stop on your tour plan. It is recommended that you come here from May to September and spend half a day here, you can savor the religious atmosphere and add great fun to your tour.