Three Pagodas are three high independent pagodas towering at the corner of a equilateral triangle, which is rare in China. It is located in the Chongsheng Temple 1 km. (0.6 mi.) away from the Ancient Town of Dali, forming a eye catching scenic spots at the foot of Cangshan Mountain and facing the Erhai Lake. With a history of more that 1800 years, it is famous for its unique architectural buildings, being regarded as a symbol of Dali City in Yunnan Province and a national cultural heritage under the protection of the government. 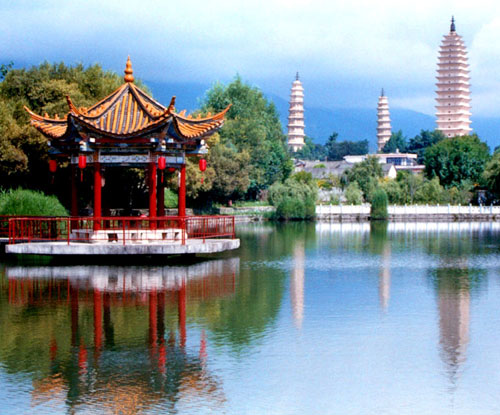 The Three pagodas are made up of one big pagodas and two small ones, which are all of ancient Chinese architectural style. The big pagoda in the middle, called Qianxun Pagoda, is 69 m. (226 ft.) high and was one of the highest pagodas during the Tang Dynasty (A.D 618 - 907). If you enter into it, you are presented with a carved shrine where a white marble sitting Buddha statue is set at the center of each facade of every story. There are in total 18 floors and you will find the body of the pagoda is surrounded with 3.3 m thick walls.

The other two pagodas both standing 70 m to the north and south sides of Qianxun Pagoda are 42 m. (138 ft.) high. Unlike the Qianxun Pagoda, they are solid and octagonal with only ten stories and the center of each side of every story is decorated with a shrine containing a Buddha statue. In 1978 during a major repairing work, there has found more than 700 Buddhist antiques, including sculptures made of gold, silver, wood or crystal and documents, which were all left from the ancient time and can reflect the culture of this ancient city.

The Three Pagodas is also featured its beautiful scenic spots. Behind them is a tranquil and beautiful lake which can reflect the pagodas in the water. There is also a Chongsheng Temple in the west which is a groups of ancient temples and look like a grand imperial city. This Buddhist temple is an popular place in many films and is regarded as one of the oldest architectural buildings in southern China.

The Three Pagoda are exquisite architectural buildings which can truly reflect the workmanship of the ancient Chinese people. Together with the Zhaozhou Bridge in Hebei Province, and the Giant Wild Goose Pagoda in Shaanxi Province, they are three curiosities of Chinese ancient architecture. The entrance fee is 120 RMB and if you are interested in architectures, here is definitely one stop of your tour.