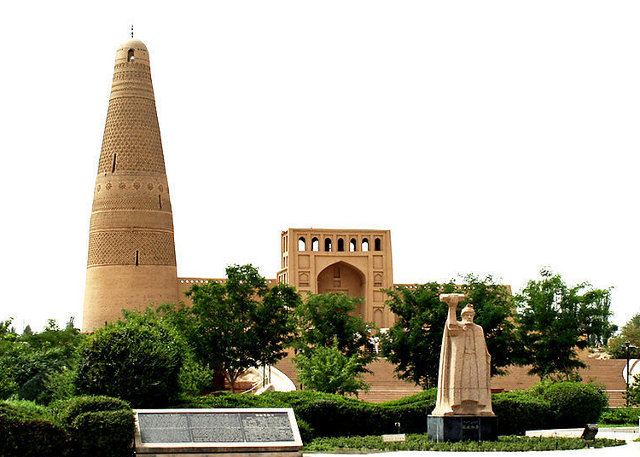 Sugong Minaret, also referred to as Emin Minaret, is located in Turpan (a grape city) in Xinjiang Uygur Autonomous Region. It's the largest ancient tower ever preserved in Xinjiang with a time-honored history of over 200 years.

This pagoda is constructed in honor of a famous Turpan General named Emin Khoja for his remarkable contribution to his country.

The Pagoda first began in A.D.1777 during the reign of the Qing emperor Qianlong and was completed a year after.

It is also listed as a cultural site under national protection. According to legend, it's Emin Khoja himself who spent 7,000 liang (an ancient currency measure) on the construction of this minaret to show his piety to Allha and record his great achievement for his country.

Sugong pagoda is not only known for this legendary figure, but also for its unique architecture. Featuring a strong Islamic architectural style, it is made up totally of bricks with a height of 44 m. (144 ft.) The diameter of its base reaches 10 m. (33 ft.) and the whole tower takes the shape of a cone with a wide base and a narrow top.

You can reach the top of the minaret by climbing up a spiral staircase. While you are climbing you can see windows totaling a number of 14 opening to different angles and at different positions of the pagoda. What is of real Islamic characteristic is the intricate and exquisite geometrical patterns on the body of the tower. 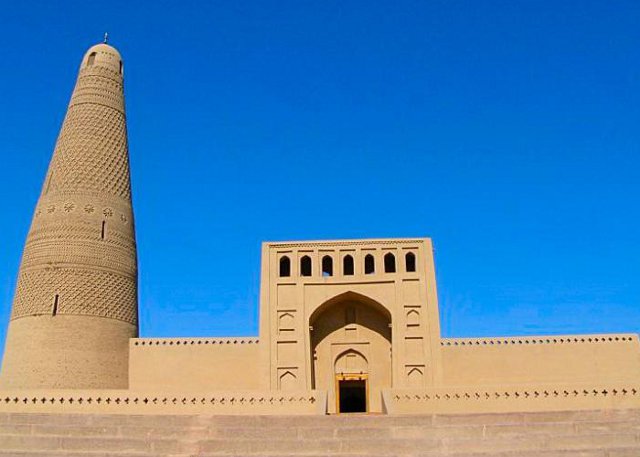 Adjacent to the pagoda is a mosque which has a seating capacity of a thousand people. The design of this mosque is a simple cylindrical shape.

What's really worth mentioning is its internal structure. Since Turpan is a place with scanty wood resources, architects came up with a novel idea of building the internal with bricks.

Therefore, don't get surprised when you find the magnificent spiral staircase made of bricks.

However, you'll surely be surprised by its function, for this structure is used not only to reach the top of the tower, but also to sustain its body weight as pillars. Because of this, it's regarded as a Islamic treasure of art created by Turpan architecture masters.