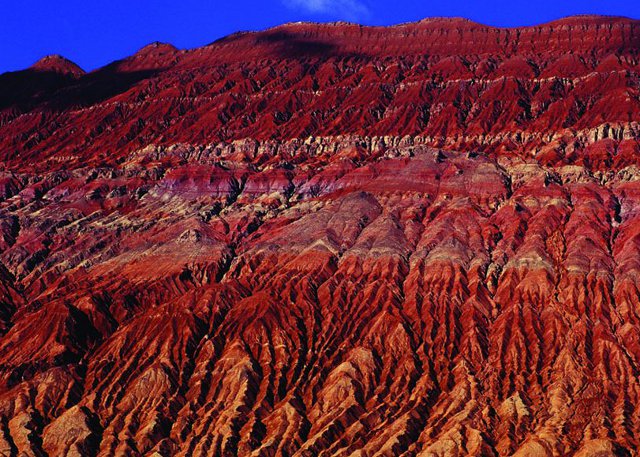 Speaking of Flaming Mountains, people, especially children, in China will automatically think of the TV drama "Journey to the West" adapted from one of the Four Classics wrote by Wu Cheng'en, an ancient writer in Chinese history.

The Mountains is actually located on north of Turpan Basin bordering the famous Silk Route. It is regarded as the most popular scenic spot there due to its marvelous view made by red granites reflecting the heat and glow of the desert.

Another reason why Flaming Mountains is so well-known is because of its unbearably hot temperature. According to statistics, the highest temperature ever recorded there reached 50 C (122 F) or above making it the hottest place in China.

As a matter of fact, the temperature on its surface is as hot as 70 C (158 F). People say that you can even boil an egg in those sandpits where the temperature is supposed to be still higher.

Additionally, there are countless numbers of grooves resulted from the movement of and the frequently flowing of rivers.

Although no grass or trees grow on Flaming Mountains, but you'll surely see green trees, lush grass and tempting fruits in those grooves which make a magic view while in contrast with the grassless mountain top. 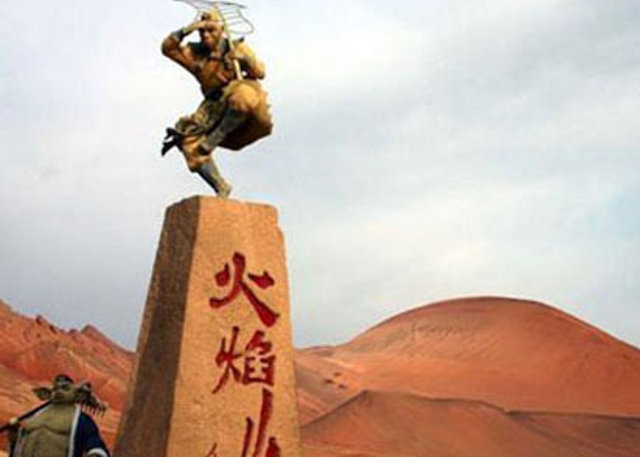 In "Journey to the West", there is a very famous character called Monkey King which is loved by almost all Chinese people, children in particular, for his resourcefulness, courage and loyalty to monk Tang Xuanzang, another character in the drama.

While you are there, you'll find the stake where Tang Xuanzang has his horse tied, and the stone where he steps on to mount the horse.

Monkey King is naughty and always makes troubles before he meets Tang Xuanzang.

Therefore,legend goes that when Monkey King visited the Lord in heaven, he enraged him and overturned the Eight Trigram Furnace from which some charcoals drop right on Turpan causing a big fire. Then Monkey King has it extinguished and afterwards, Flaming Mountains was formed.