Yangpachen (also called Yangbajain) is located in Damxung County, 90 kilometers northwest of Lhasa, Tibet. Its elevation is 4,300 meters, the mountain peaks on its north and south sides are above 5,500 to 6,000 meters above sea level.

Yangpachen, world-famous for its spectacular phenomenon of hot springs boiling on the cold plateau, features all kinds of hot springs including highest-temperature hot springs, boiling springs, and geysers as well as common hot springs, the area of which totals more than 7,000 square meters. With temperatures around 47℃/117℉, it is the first geothermal field to be developed on the Chinese mainland and the highest geothermal power station in the world. 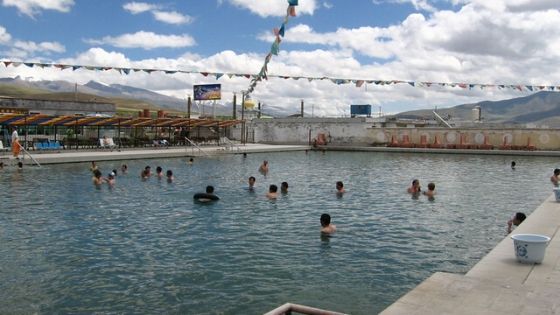 Sight to see and things to do here

The early morning in Yangpachen is the most beautiful, as the hydrothermal fields are always suffused with white haze and the lake surface is always covered with great steam agglomerations, which is really fascinating and makes Yangpachen a wonderland. If you are lucky, you will witness the fantastic and splendid scene: the boiling water is erupting into the sky from the mouth of the hot spring.

The hot spring in Yangpachen, which contains a high content of sulphuretted hydrogen, is therapeutic to many chronic diseases. The bathing place is an open-air swimming pool. The hot spring, the temperature of which is too high, needs to be cooled in two open-air cisterns before available for bathing. With the snow-capped mountains in the distance, it is really an enjoyment to have a hot-spring bath in the swimming pool. Many travelers said that the most unforgettable memory about enjoying the hot spring in Yangpachen is not the gorgeous scenery, but the experience of the hot spring bath in a high altitude region. Besides, it can wash away the dust and fatigue of traveling in Tibet. Therefore, it’s better to enjoy the Yangpachen hot-spring after the excursion to Namtso Lake and before returning to Lhasa. 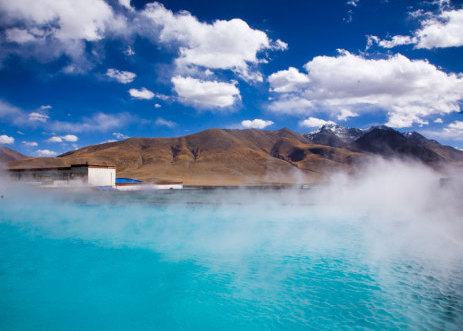 It is suitable for enjoying hot springs here all year round, especially in winter. The rolling snow mountains are within easy reach, it is very pleasant and romantic to enjoy the heavy snowfall by bathing in the hot spring. If you stay in Yangpachen for one night, you would also have the chance to enjoy its fairyland in the early morning. The steam clusters generated by the geothermal field rise up, to feel the whole world is shrouded in a white atmosphere.