Situated in the heart of old Lhasa city, Jokhang Temple is regarded as the spiritual center of Tibet. Along with the Potala Palace, it is a sight not to be missed for those who travel in Tibet, and one of the best places to learn about the unique Tibetan Buddhism. The temple was listed in the World Heritage Sites by UNESCO.

The History and Legend of Jokhang Temple

In the local legend, Jokhang Temple was constructed on the former site of a lake, The lake site was the idea of Prince Wen Cheng, who was a learned woman and found that the geography of Tibet was much like a hag, with the lake at the heart. She suggested that the hag must be demolished by filling and leveling the lake using 1,000 goats to carry soil from a mountain far away, or it will destroy every temple in the region. Finally, the temple was completed and was named Ra-Sa-Vphrul-Snang ('ra' meaning goat and 'sa' meaning earth in Tibetan) to commemorate those goats.

After years of development, The city of Ra-Sa grew around the temple and over time, became known as Lhasa. The temple was the origin of Tibetan Buddhism and has become an inseparable part of Tibetan history and culture. Maybe the legend is not true, but it makes the Temple more mystical and beautiful. 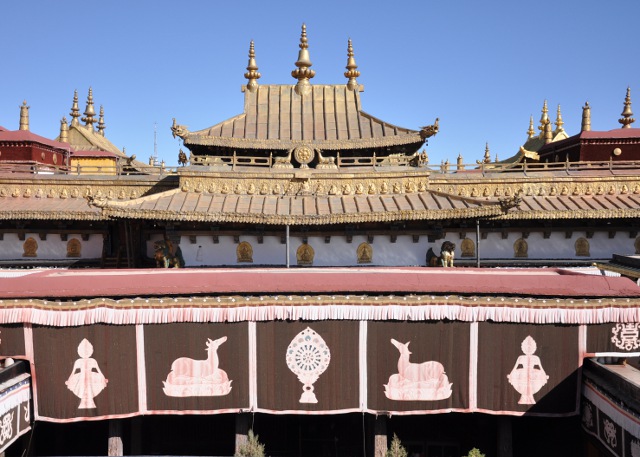 What to see in Jokhang Temple

The temple is a gigantic architectural complex that demonstrates a combination of the style of Tibetan, Han, India, and Nepal, as well as a Mandala world outlook of Buddhism. The main building is a 4 stories temple, with roofs covered with gilded bronze tiles. Atop of the building you can see a Dharma Wheel (chakra) flanked by two deer, which represents the unity of all things and symbolizes Sakyamuni himself.

Jokhang Temple is a holy shrine that well preserves numerous historical relics since the Tang Dynasty, including the statues of King Songtesn Gampo, Princess Wencheng and Princess Bhrikuti Devi. Most of these Buddhist statues were brought by the two princesses as part of their dowries. The statue of Sakyamuni at age 12 sitting in the middle of the main hall is the most precious treasure of the temple. It has been gilded many times since it was brought by Princess Wencheng and decorated elaborately with jewels typical of Tibet. Statues of King Songtsem Gampo, Princess Wen Cheng, and Princess Bhrikuti are on the second floor.

The golden roof is a highlight in Jokhang Temple, as it offers a great view of Lhasa city and the Potala Palace. The roof is a way back to the real world from the inner temple, here you can see the monks debating in the courtyards within temple and the devout pilgrims  prostrating themselves at the entrance of the temple, and the Barkhor street, which is a famous Kora around Jokhang Temple and a market for selling souvenirs.

Tibetans also like to call the area of ​​Barkhor Street dominated by Jokhang Temple as “Lhasa”, which means Buddha in Tibetan. You will see the numerous pilgrims kneeling and bowing to have their heads touching the ground at the entrance of Jokhang Temple. It is the highest sign of reverence. This temple has a high position in the minds of the Lhasa people. There are more people turning around the Jokhang Temple every day. Many monks are also standing near the Jokhang Temple to sing the alms to the people passing by.

For Tibetan pilgrims, the principal points of orientation in Lhasa are the city’s three Koras (pilgrimage circuits): the Nangkhor, Barkhor, and Lingkor. For the visitors, all the Koras are well worth following, especially during festivals like Saga Dawa (the 15th day of the 4th month in the Tibetan calendar and normally in May/June in the Gregorian calendar).