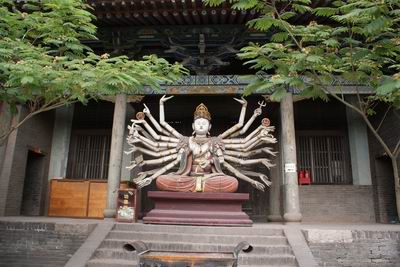 Shuanglin Temple has been a UNESCO World Heritage since 1997 due to its exquisite and well-preserved sculptures.

It is one of the popular attractions for tourists taking a tour in Pingyao, one of the four best preserved ancient cities in China.

There are now 2,000 colorful sculptures preserved in the temple which exemplify the high craftsmanship of ancient artisans of the Song, Yuan, Ming and Qing Dynasties. In 1997, it was included in the World Heritage List by the UNESCO.

Shuanglin Temple was initially called Zhongdu Temple and was changed to its present name during the Song Dynasty (960-1127). In Chinese, Shuang means double and Lin, forest. 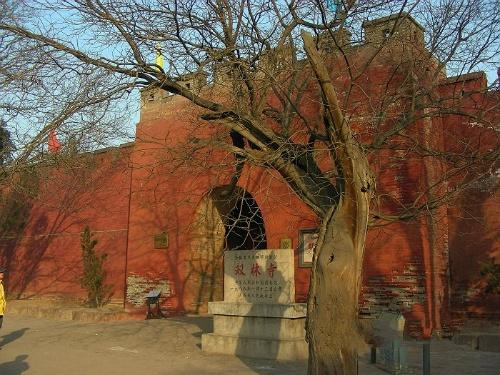 The name of the temple derived from a Buddhist story in which Sakyamuni, the founder of Buddhism entered nirvana under two trees that bloomed the moment he disappeared.

According to historical records, Shuanglin Temple was originally reconstructed in 571 and was renovated and enlarged several times in the following periods.

The currently preserved temple is of the architectural styles of Ming and Qing Dynasties. It covers an area of 15,000 sq.m. (161,458 sq. ft.) and is divided into two parts: the western part and the eastern part.

The western part consists of ten large and small halls which include:

Guan Yu was a famous general of Shu during the Period of Three Kingdoms and he was later worshiped as god by people. The eastern part is made up of many monk's rooms and a sutra-chanting hall.

In Heavenly Kings' Hall you will find the sculptures of the four Heavenly Kings below the eaves of the hall which is three meters high and each holds an umbrella, a snake, a sword and a pipa (a four-stringed Chinese lute) in hand. 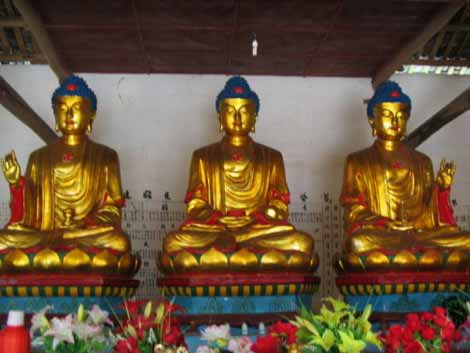 Below the eaves of the hall hangs a plaque with the four characters written on it: "Tian Zhu Sheng Jing". The Arhats' Hall has the sculpture of Kwan-yin with eighteen arhats standing to the left and right with facial expressions differing from each other.

In the One-thousand Buddha Hall sits the statue of Kwan-yin with her right leg bent and left one stepping on a lotus leaf. Other major halls are also a must-see of Shuanglin Temple for their unique characteristics.

Chengdu
5 days
∙ Private ∙
Trekking & Biking
Enjoy the breathtaking scenery of Songpan in the highlands of norther Sichuan. Experience the life of the local Tibetan people as you ride into the woods. This unique horse riding experience adds to any Sichuan trip.
Add to shortlist
From ¥ 3,100
View tour >