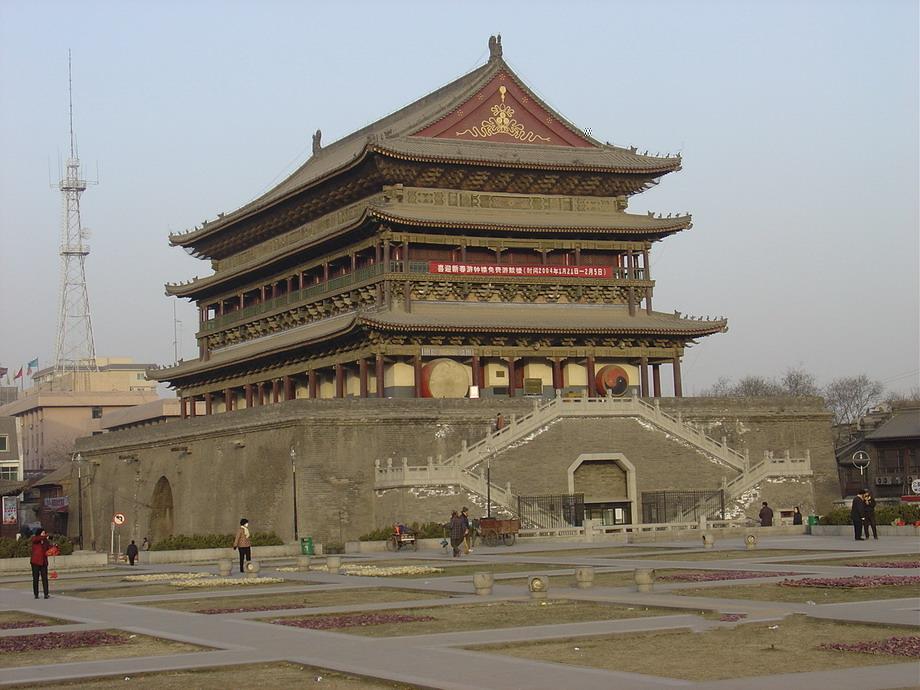 Drum Tower is definitely one of the best places to catch a glimpse of the past glory of Xi'an city - the ancient capital of China known as Chang'an!

It is of typical Ming Dynasty architectural style and a landmark of Xi'an. Read on travel tips on it's location, history, what to see,  ticket price, opening time etc..

Drum Tower is located in the center of Xi'an City, in Shaanxi Province. Facing Xi'an Bell Tower in the east, it was built in 1380 during the reign of Hongwu emperor, four years earlier than the Bell Tower.

When Qianlong Emperor (1711-1799) rose to power, the Drum Tower was reconstructed twice making it the largest drum tower ever preserved in China.

In ancient times, bells are used to tell time at sunrise while drums at sunset which is the so called Chenzhongmugu.

At night when you hear the drum beat three times consecutively, it means it's three o'clock at that time and they do so five times before you hear the beat that announces daybreak.  It's so named because there used to be a massive drum on the tower to tell the time.

Unfortunately, the original drum failed to survive the vicissitudes of history and could not be seen any more. However, with the efforts of the Xi'an government in 1996, a similar drum was created with a height of 1.8 m. (5.9 ft.) and a diameter of 2.83 m. (9.28 ft.).

Drum Tower is of typical Ming Dynasty architectural style with multiple eaves and black tiles. The rectangular tower has two floors and is 7.7 m. (25 ft.) in height and 52.6 m. (173 ft.) in width with a 38 m. (125 ft.) long base, in the middle of which a special cave is built for people and cars to go through. 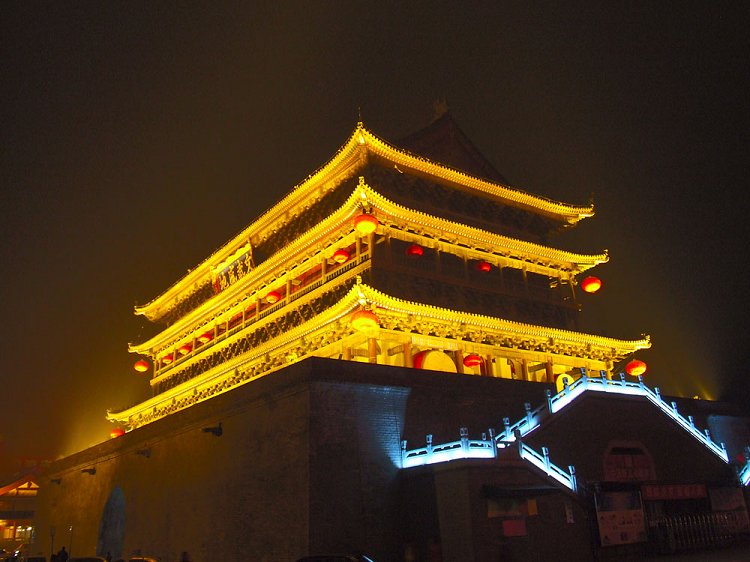 There used to be two horizontal inscribed boards hanging under the third eaves in the south and north of the tower each having four Chinese characters on them with the south one reads as "Wenwushengdi" and the north one "Shengwentianxia".

However, they were destroyed in the Cultural Revolution (1966 - 1976). In recent years, in order to restore the Drum Tower, 150,000 RMB (25,000 USD) was spent on creating another two similar inscribed boards, to ensure the original appearance of which lots of antiquarians devoted in large amount of time and effort.

How to distinguish the Xi'an Bell Tower from Drum Tower? You can tell from their different tops at first glance. Final travel tips for you: ticket price for Drum Tower is 35 RMB (6 USD). The ideal length of visit is around 2 hours.