Located in the northwest of Hunan province, Zhangjiajie National Forest Park is the first authorized national forest park in China which set up in 1982. In 1992, it was recruited in the World Natural Heritage Sites by UNESCO. Covering an area of 480 sq. km. (185 sq. mi.), this natural scenic spot are separated into 6 main attraction areas, which includes Yellow Stone Stronghold (Huangshizhai), Yuanjiajie, Golden Whip Stream and more.

What to See in Zhangjiajie

When talking about Zhangjiajie, the first impression must be the grotesque peaks. These jagged Karst peaks have inspired the world famous director, James Cameron in his movie, Avatar. They are regarded as the prototype of the mountains in Pandora.

About 98% of the area is covered with vegetation. Travelers will find more than 720 species of the 102 families, including all the five most important floras, namely, the rose family, pulse family, grass family, composite family and orchid family. Some of these trees are rare and regarded as national treasure. For instance, the Dove tree, known as living fossil, can be traced back as early as the Fourth Ice Age.

While wandering in the exuberant forest of Zhangjiajie natural scenic spot, travelers will be able to hear birds singing and see monkeys playing in the tree. Additionally, the park also boasts a variety of animals, and most of which are under the protection of Chinese Government, such as Golden Pheasant, Rhesus Monkey, Giant Salamander and Musk Deer.

Zhangjiajie National Forest Park belongs to the sub-tropical climate of Central Asia. Splendid mountains and luxuriant trees help form a favorable climate: warm in winter and cool in summer. The average temperature is 13C (55F), the highest 17C (62F ) while the lowest is 10C (50F) on average in winter. The charm of the park varies with the alternation of seasons; therefore, it attracts visitors all year round. Besides its pleasant climate, the environment and air quality also provide visitors a chance to breathe healthy air which is believed to be rich in negative oxygen. It is also believed that hypertension patient may have their blood pressure lowered if they stay in the park for a period of time. This is due to the fact that dust particles in the park are 88% lower and the air 10% mistier than outside.

The park is endowed with many attraction spots, such as the Yellow Stone Stronghold (Huangshizhai), Yaozizhai, Yuanjiajie and the Golden Whip Stream. 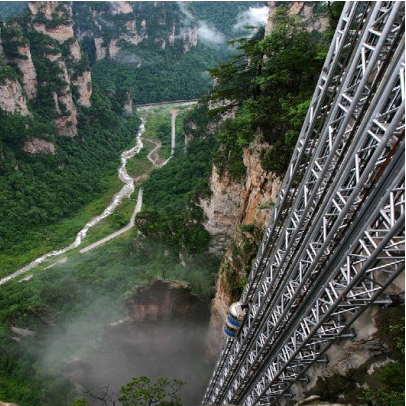 Covering an area of 41 ac. and 1,200 m. (0.8 mi.) above the sea level, Yellow Stone Stronghold (Huangshizhai) the largest observing spot which is located in the west of the park. As one of the must see attractions in Zhangjiajie, the summit of the stronghold offers a panoramic view of the mountainside and mysterious primeval forests. The main attraction spots include Tranquil Trail in Fir Woods, Imperial Edict and the Precious Box, Needle Peak, the Southern Gate to Heaven, Five-Finger Peak and so on.

A 300 m. (984 ft.0 walk) from the gate of the park will lead travelers to the entrance of the Golden Whip Stream. The road along the stream perhaps is one of the most enchanting route in Zhangjiajie. Named after the Golden Whip Rock that it flows by, this stream, 5.7 km. long (3.5 mi.), joins the Lute stream in the west and Suoxi Stream in the east. Flanked by ridges and peaks, the crystal clear water makes it possible to observe every action of the fish in the water. Wild flowers are in abundance here. 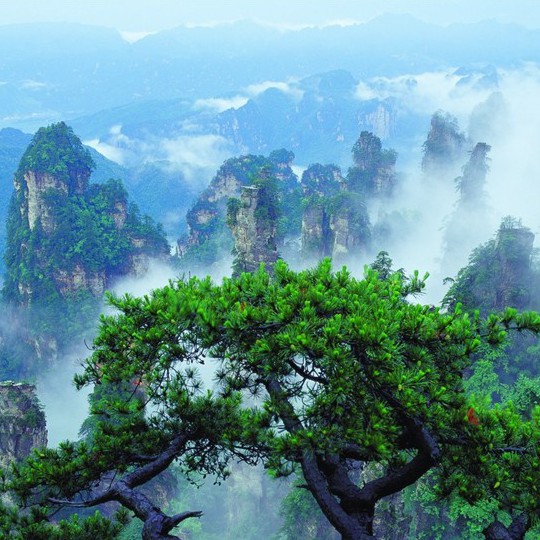 The northern part of the park is the essential tourist route. Yuanjiajie is a natural platform that faces giant rocks rising from deep valleys and surrounded by higher mountains. Unique in their shapes and covered with pine trees, these rocks resemble a vivid Chinese painting.

After visiting Zhangjiajie, Fenghuang, a tranquil ancient town located about 3.5 hours drive away from the national park is a good place for travelers to extend their trip. They can also have an ethnic tour by visiting Guizhou province, which is also not far away from Zhangjiajie.

Chongqing
⇀ Zhangjiajie
...
Chongqing ⇀ Yangtze Cruise ⇀ Zhangjiajie
7 days
∙ Private ∙
Natural scenery
Start this tour with a Chongqing Yangtze River cruise, where you will view the natural beauty along both banks. Followed by an adventure in Zhangjiajie, which is famous for the splendid peaks. Much more awaits in this amazing journey.
Add to shortlist
From ¥ 5,600
View tour >