Guangdong, bearing the alternative English name of Kwangtung, is a province located in the south of China. It borders six provinces Hongkong, Macao, Guangxi, Hunan, Jiangxi and Fujian and close to the South sea. Covering an area of 177,900 sq. km and with a population of 10 million, it is large province with the most developed economy and open culture in China. It is famous for its unique language (Cantonese), custom and culture. 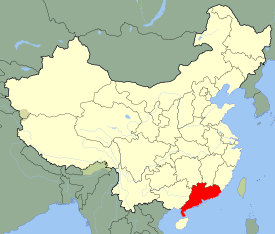 The history of Guangdong province can be dated back to 129,000 years ago, when it was called "Nanyue". It was an important battle field during the war periods. In July of 1925, the government of  the Republic of China was founded in Guangzhou city, now the capital of Guangdong. Nowadays It is still one part of Chinese territory, boasting its long history and diverse and unique culture. The main culture in Guangdong consists of three different ones: Cantonese culture, Hakka Culture, Chaoshan culture. One important site called "Kaiping Watchtower", listed as one of the world heritage, is a good reflect of Hakka Culture and people's lives.

If you come to Guangzhou, one important thing you can't miss is to watch the operas, such as Cantonese opera, Chao opera, and puppet show. The Cantonese opera has recently been listed as one of the intangible cultural heritage in 2006. All the opera can fully reflect the local custom and lifestyle of Guangdong people and with unique local clothes, singing and dancing which will surely draw you attention.

There are in total 21 cities and 122 counties  in Guangdong. The most important and famous 6 cities are: Guangzhou, Shenzhen, Foshan, Dongguan, Zhongshan and Zhuhai. Other cities are Shantou, Shaoguan, Zhanjiang, Zhaoqing, Jiangmen, Maoming, Huizhou, Meizhou, Shanwei, Heyuan, Yangjaing, Qingyuan, Chaozhou, Jieyang and Yunfu. Guangzhou is the Capital , the educational, commercial, and political of Guangdong and it is the third largest city in China. Shenzhen is the first special economic zone in China and and a city for tourism, finance, and culture exchange. 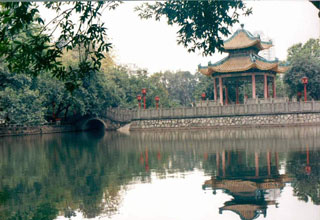 Guangdong is abundant in all kinds of tourism attractions. There area number of  natural scenic spots, museums, historical sites, cathedrals and amusement parks in this province which enable you fully enjoy your tour. Whether you have been here or not, you need to know the "Eight Sights in Guangzhou": Baiyun Mountain, Yuexiu mountain, Chen Temple, Pearl River, East Train Station's Artificial Waterfall, Guangdong Olympic Stadium, Huanghuagang, Lotus Mountain. Other attractions include: Guangdong Provincial Museum, Chim-long Paradise,  Sun Yat-sen Memorial Hall, Asia Highest Fountain, The South China Botanical Garden and so on.

Food in Guangdong is Well known worldwide.There are major three kinds of food: Guangodng Cuisine as the major one, the Chao cuisine as the symbol of elegance and the Hakka cuisine famous for its local flavor. There are also all kinds of teas such as Pu 'er Tea, Tie Guanyin for you to relax  yourself. If you are traveling in Guangzhou, don't forget to treat yourself with the delicious local flavors and add great fun to you tour. Shopping in Guangzhou is very convenient because of the booming and prosperous economy. There are all kinds of shopping centers, supermarkets everywhere in the cities.  Guangzhou is surely a great place for tourism and paradise for leisure. If you want to travel to China, Guangzhou will you definitely be one stop of your traveling plan.