Chongqing, also known as Mountain City, is a provincial-level administrative region in China, a municipality directly under the Central Government, a national central city, a megacity, and a comprehensive transportation hub in the southwest region. Located in the southwestern part of inland China, it’s the economic, financial, scientific and technological innovation, shipping, and commercial logistics center in the upper reaches of the Yangtze River.

Chongqing is dominated by the Han nationality, and the ethnic minorities mainly include the Tujia and Miao nationalities. As the gateway city for the Yangtze River Three Gorges cruise, Chongqing is rich in tourism resources including the World Cultural Heritage Dazu Rock Carvings, the World Natural Heritage Oolong Karst, and Nanchuan Jinfo Mountain, which can be said a must-see city for travelers to tour China. In addition, the overpasses, stairs, slopes, and hot pot restaurants are everywhere in Chongqing. 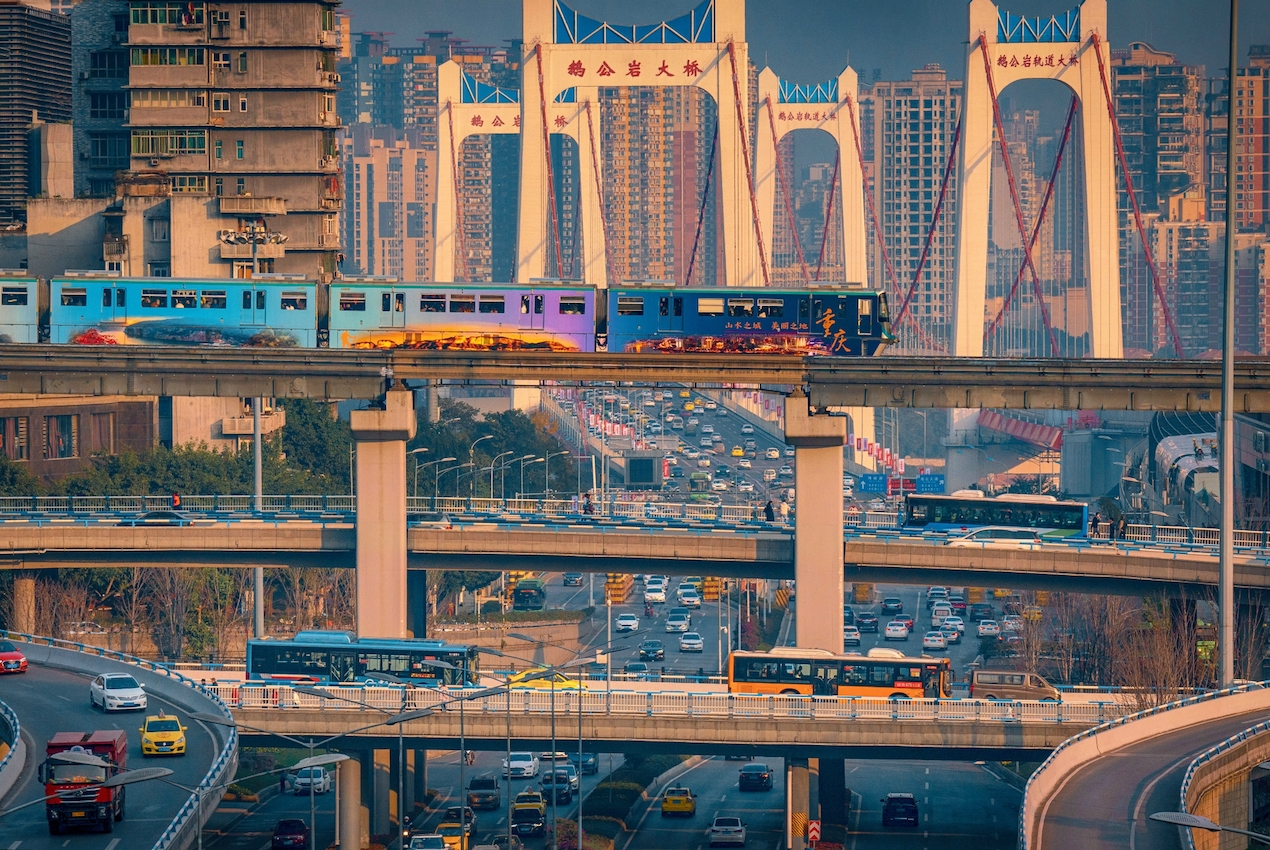 Top things to see and do in Chongqing

Enjoy the night view for Hongya Cave and Chaotianmen Square

Chongqing's urban area is backed by the mountains and faces the river on three sides. The buildings are stacked on top of each other, and the roads spiral upward, thus forming a wonderful night scene. In particular, Hongya cave and Chaotianmen wharf take the lighting cluster of buildings as the center, and the lights of the main roads and bridges as the link. With an extraordinary drop of 75 meters, Hongya cave is built along the cliff, scattered high and low, and built against the mountain. Chaotianmen was once one of the 17 ancient city gates in Chongqing. Three Gorges cruises, sightseeing cruises, and ferries to Yangren Street all set off from here. The wharf at night is brightly lit, with gorgeous cruise ships shuttle to and from. 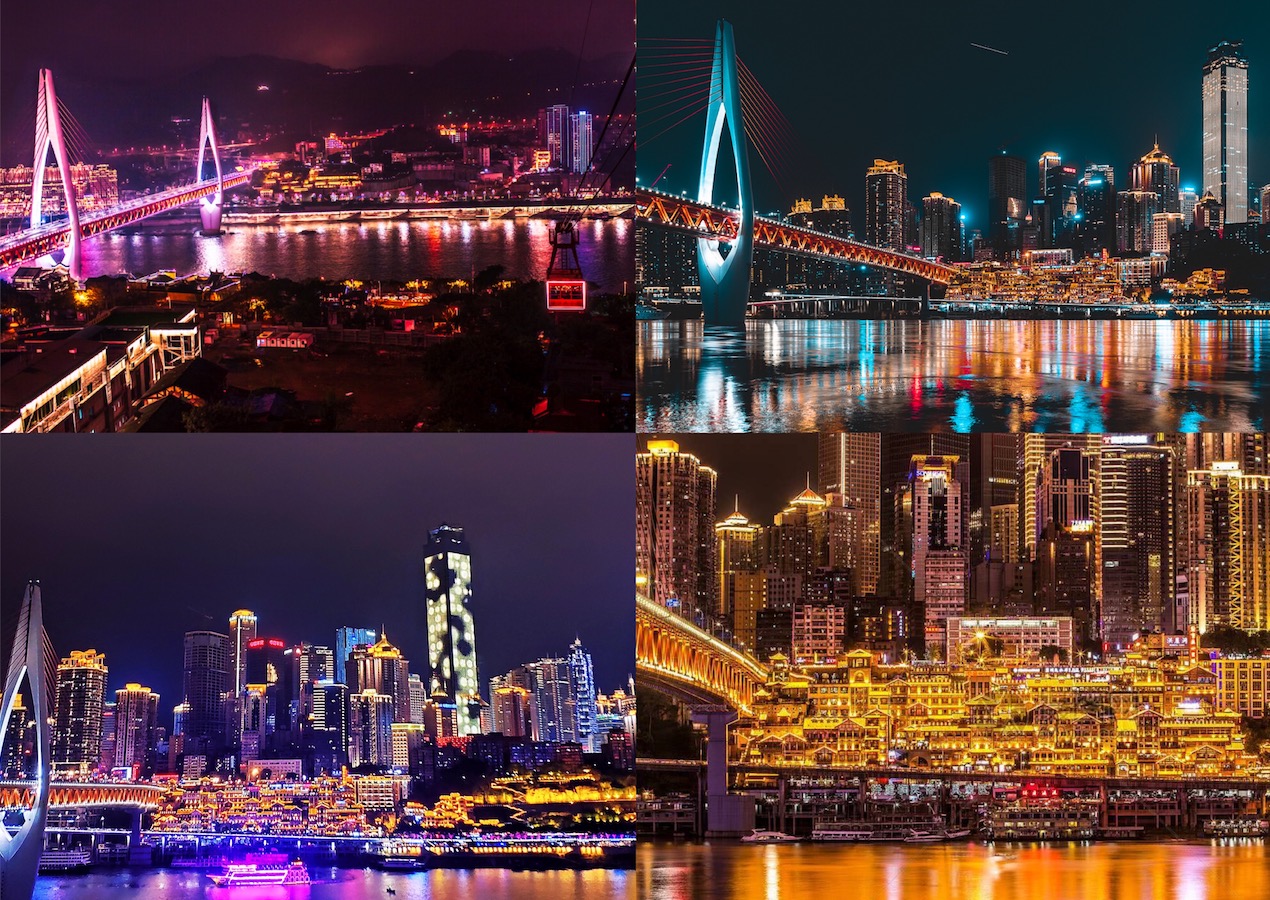 Walking tour to experience the magical terrain of Chongqing

Many people say that Chongqing is a 3D magical city. For example, when you take the elevator to the 12th floor and step out you will find another busy world as you are still on the ground (1st floor). Therefore, walking is the best way to feel the charm of this city, to not only see all kinds of strange and scattered buildings but also experience the lives of local people in the old city. The most distinctive trail in Chongqing is the third footpath (also known as Mountain city footpath). It's Chongqing's longest historical road (a total length of 1,748 meters) with a higher slope, visitors will pass the Zhongshan Hospital, the buildings during the War of Resistance against Japan, the Bodhi Vajra Tower, the site of the French Charity Church, and the hanging plank road. 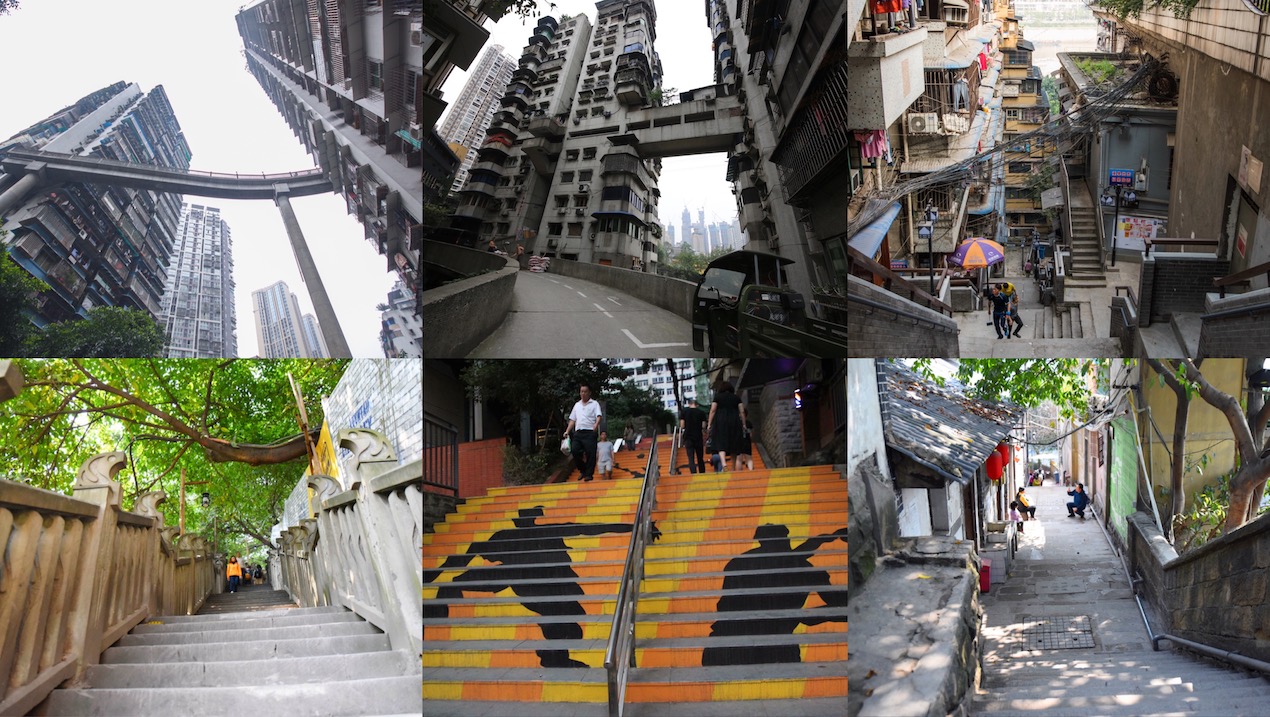 Take the monorail that shuttles in the residential building

Chongqing has many distinctive and interesting light rail stations, attracting countless tourists and photographers to take pictures every day. The most interesting one is the Liziba Monorail Station, which runs through the building. Liziba Station is a comprehensive building composed of 8 floors, 1st-7th floors are shops and residential buildings, and the 8th floor is a monorail station. They are combined into a whole without affecting each other. This uniquely designed straddle monorail train can reduce vibration and noise.

Located on the banks of the Jialing River in the Shapingba District of Chongqing, Ciqikou Ancient Town is a famous historical and cultural street in China. It has a unique landform of "one river, two streams, three mountains, and four streets". There are many traditional performances and skills here, such as rapeseed oil manufacture, silk drawing, sugar dough making, Sichuan opera, and various traditional snacks, tea houses, etc.

The Crown Grand Escalator is an intersection escalator in Chongqing that connects Lianglukou Street and Chongqing Railway Station. It is one of Chongqing's characteristic traffic. Completed in 1996, it has a total length of 112 meters and is the second-longest escalator in Asia. Because the slope is steep and the speed is fast, it's not recommended for those who are drunk, with high blood pressure, acrophobia, or mental illness. The ticket price is CN￥2 per person for one way. 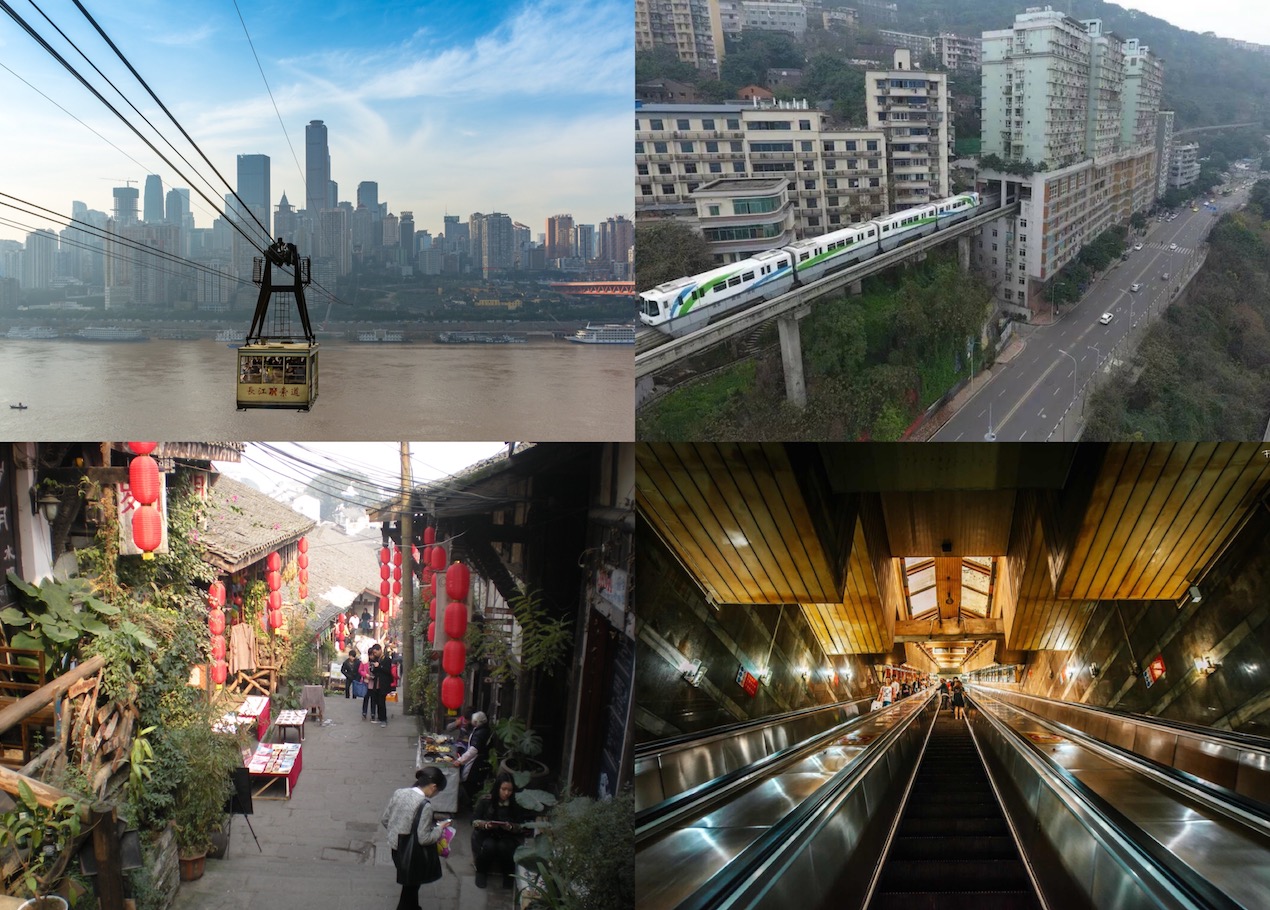 Located on the southeastern edge of Chongqing, 128 kilometers away from the urban area. Whether it is the Wulong Three Natural Bridges, which is called the wonder of the world, or the World Natural Heritage Magical Furong Cave, or the Wulong Fairy Mountain with the vast grassland, they are all highly impressed with the craftsmanship of the natural masterwork. The opening hour of Three Natural Bridges is 09:00-16:00, the admission is CN¥ 125 per person (March-October) or CN¥ 95 per person(November-February).

Located in the Dazu District of Chongqing, about 120 kilometers from the city center. They were carved in the Tang, Wudai, and Song Dynasties, and continually carved in the Ming and Qing Dynasties. It is now a world cultural heritage and one of the eight largest grottoes in the world. The Dazu Rock Carvings represent the highest level of world grotto art in the 9th to 13th centuries and are the last monuments in the history of human grotto art. The opening hour is 09:00-17:00, the admission is CN￥115 per person.

Taking 4-5 days with the Yangtze River Cruise to sail through the three gorges, travelers will not only view the natural beauty along both banks but also visit the world’s largest hydropower project, the Three Gorge Dam Site. Tourists can choose the best cruise based on their time, boarding point, and budget. We would recommend travelers taking the luxury cruise ships (with bars, swimming pools, cinemas, and other entertainment facilities) which range from CN￥2,000-5,000 per person for a comfortable and relaxing journey. 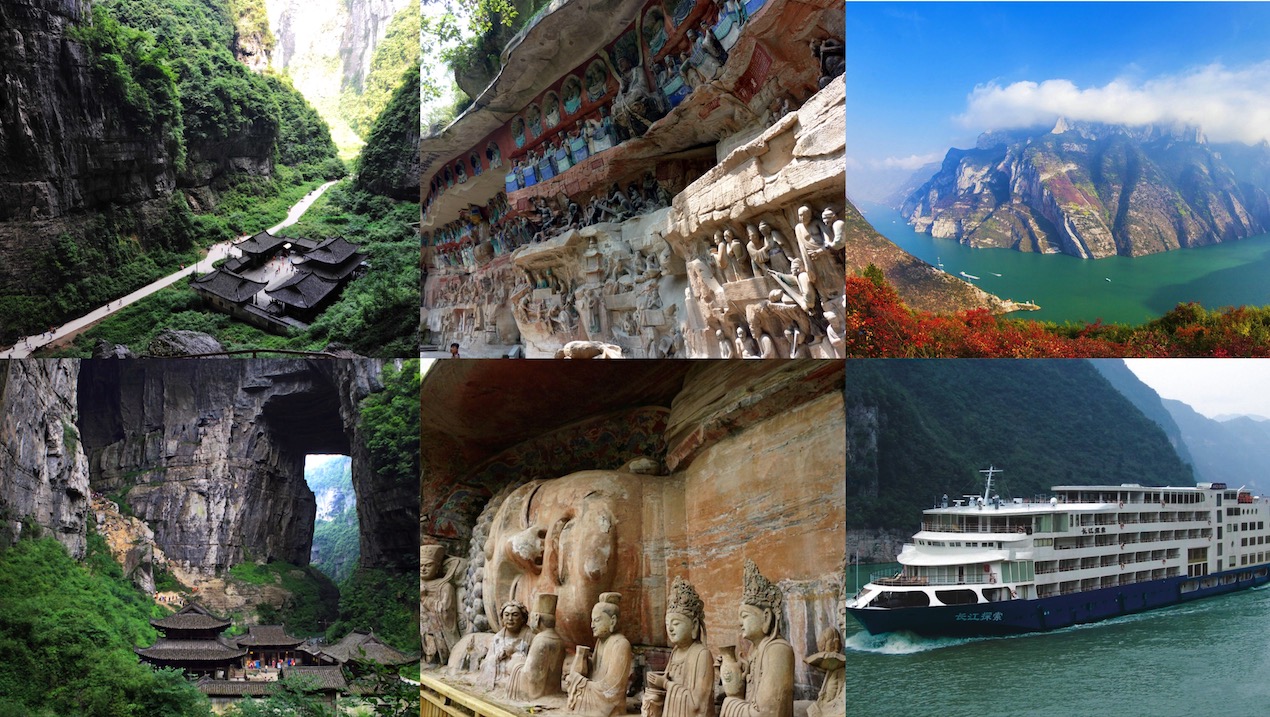 The local specialties and activities in Chongqing

Chongqing Bang Bang refers to people who work with physical strength, relying on a bamboo stick. Bang Bang's business scope is as large as the owner's large items such as furniture or electrical home appliances, and as small as a suitcase. Chongqing's special terrain has few flat roads, most of which are ramps and stairs, so many people (especially women and the elderly) need the assistance to take goods to a certain place. Most Bang Bangs are honest and trustworthy and have their own professional ethics. They rely on their own hands, a bamboo stick, and a pair of shoulders, to provide convenience for millions of families. Based on the destination distance and the goods weight, the employer and Bang Bangs negotiate the price by themselves.

Located in the Jiulongpo District of Chongqing. For a long time, it is the most grounded place in Chongqing where the Chongqing power plant, railway bureau, and dock workers have been gathered. It’s also home to the Sichuan Academy of Fine Arts, which is full of literature and art, retro, nostalgia, the atmosphere of local culture. The entire street outside the Sichuan Academy of Fine Arts is filled with graffiti, which is the largest graffiti artwork in China and the world today.

Fengdu County, also known as the Ghost Town, is located in the upper reaches of the Yangtze River, in the east of Chongqing about 170KM away, and in the heart of the Three Gorges Reservoir. With a history of more than 2,000 years, it’s not only a legendary ghost town but also a treasure house of folk culture and art integrating Confucianism, Taoism, and Buddhism. In addition, it’s a must-see shore excursion during the Yangtze River cruise. Every year Chinese Lunar New Year and Zhongyuan Festival, grand events are held here. The activities are rich in content, in addition to being mysterious and grim, they are more solemn and respectful for the dead and soul.

Enjoy the meal in the Air-raid Shelters

The digging of underground air-raid shelters was created by Chongqing people in the bombardment. It was hailed as "the greatest urban air-defense project in the world at that time", and great wonder in the history of human warfare. The war has been over for more than 70 years, and today's air-raid shelters are no longer the refuge for civilians, but the popular restaurants. The air-raid shelter is warm in winter and cool in summer, especially in the hot summer, dining in the air-raid shelter is a great experience. 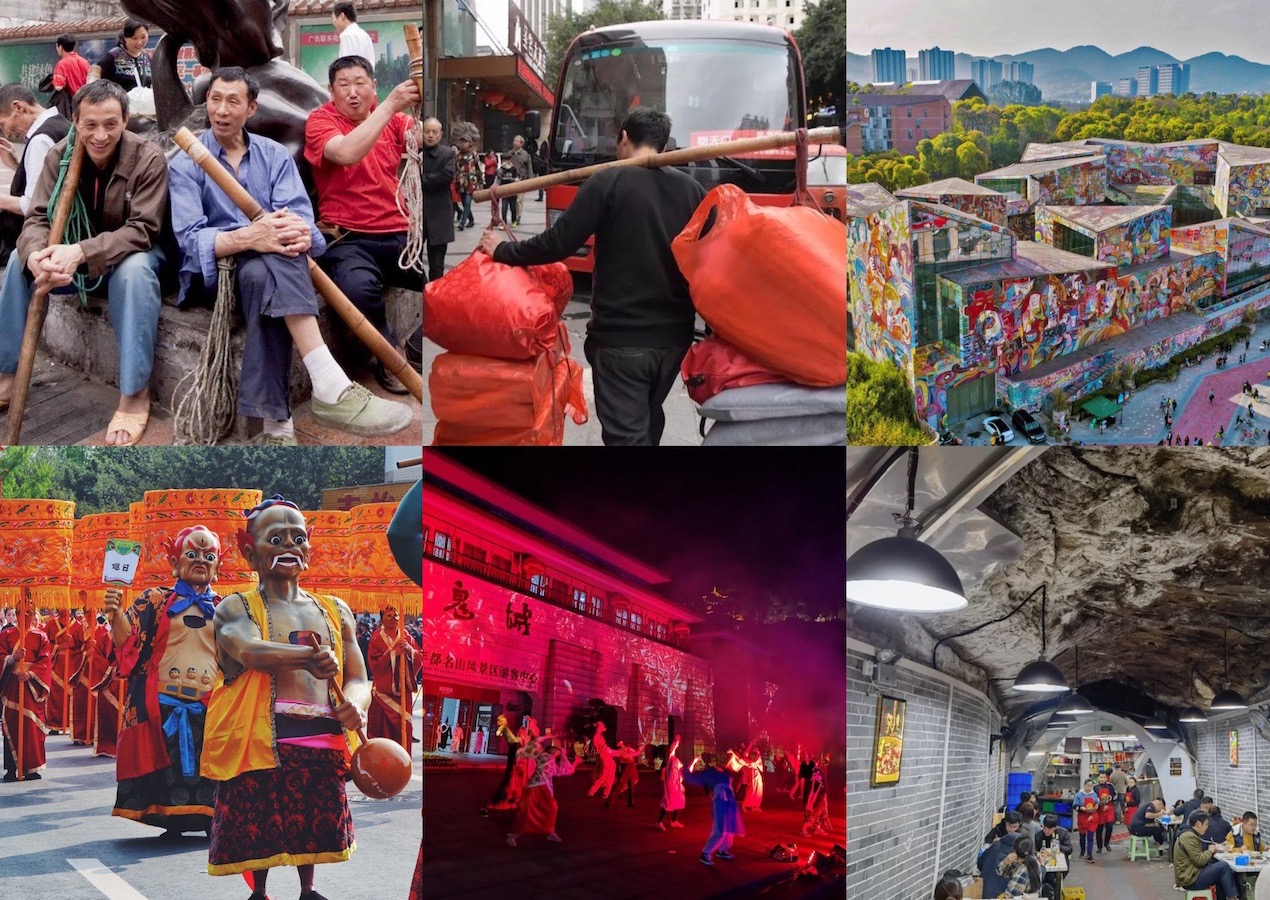 From March to May and September to October is the best time to travel to Chongqing. Chongqing has a humid subtropical monsoon climate, these two periods are Chongqing's spring and autumn, and the temperature is the most comfortable, neither hot nor cold. Chongqing is one of the four hottest-weather cities in China. June to August is the hottest season in Chongqing, with the highest temperature reaching 40°C. From November to February is the winter in Chongqing, the climate is cold and humid with few sunny days. 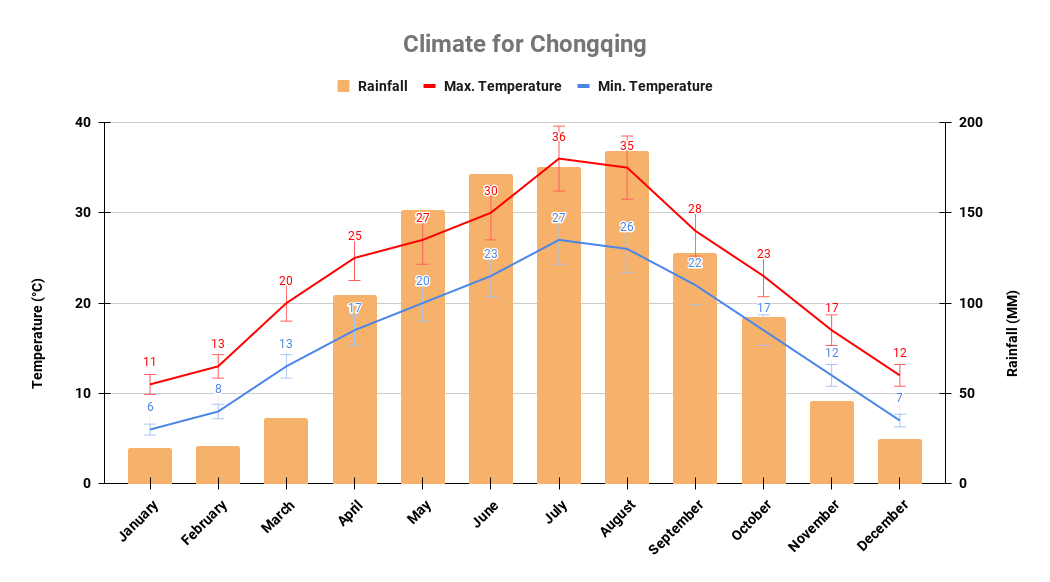 How to get to Chongqing

Most cities in China (such as Beijing, Shanghai, Xi'an, Guangzhou, Lhasa, Kunming, etc.) have flights to and from Chongqing every day. Chongqing Jiangbei International Airport is about 25 kilometers away from the main city and a 50-minute drive. It can be also reached directly by Metro Line 3 and Line 10. In addition, many international routes have been opened and operated, such as Bangkok, Singapore, Tokyo, Los Angeles, Frankfurt, Sydney, etc.

Lodging and dining in Chongqing

There are various grades and categories from inns, guesthouses, express hotels to 5-star luxury hotels in Chongqing. Depending on the peak/low/holiday seasons, the average price of a 3-star hotel usually ranges CN￥280-500 per night, CN￥550-1,200 per night for 4-star hotels, and CN￥1,000-2,200 per night for 5-star hotels. The overall price is a bit cheaper than the hotels in Beijing, Shanghai, and other coastal cities.

One-third of tourists will choose to stay in Jiefangbei and Hongya cave areas. This is the most prosperous area in Chongqing, with convenient transportation, multiple bus and rail transit stations. In addition, catering, accommodation, entertainment, shopping, and other functions are very complete. Many tourists also choose to stay in hotels near People's square or Guanyin bridge. The People's Square is adjacent to the People's Auditorium, the characteristic building of Chongqing, and nearby are the Three Gorges Museum and Chongqing Museum. Guanyin Bridge is a paradise for shopping and food. The Shapingba area is where many young people and art lovers choose to stay in Chongqing. It’s a cultural center of Chongqing, where famous schools such as Chongqing University, School of Foreign Languages, and Academy of Fine Arts gather. Although in the prosperous area of the city, the accommodation is relatively cheap and the transportation is very convenient. 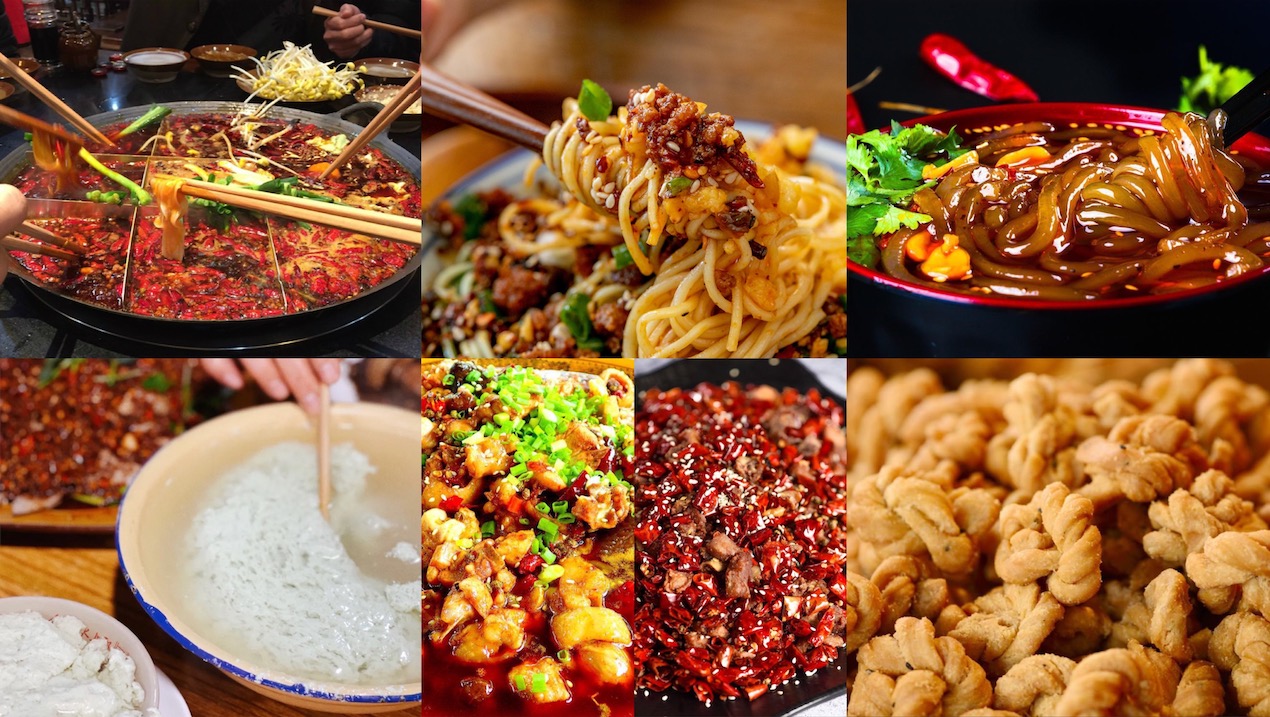 Chongqing cuisine is all over the streets and alleys. The biggest feature is spicy, which is basically inevitable. Whether it is hot pot, noodles, or the Chinese dish, chili and peppercorns run through your taste buds. If you can't eat spicy food, be sure to ask the waiter/cook to put less or no chili.