Chengdu's Jinsha Musical presents a cultural legacy based on ancient Sichuan's rich and luminous Shu culture. The performance is one of Sichuan's top arts performances, a must-see for tourists coming to Chengdu to explore the charm of historic Shu culture.

To better understand the Jinsha musical, one should first know a little about the Jinsha site. On the west side of Chengdu, ancient artifacts were first discovered by workers excavating the Jinsha Cottage area to make way for new housing. Their discovery included more than 30 pieces of gold, 400 pieces of jade and bronze, 170 stone artifacts, and 40 pieces of ivory, with the overall discovery numbering over 1,000 pieces and weighing more than 1 ton. Most of the artifacts date back to the Shang Dynasty (1600-1046 BC) and earlier Western Zhou Dynasty (1046-771 BC), as well as some from China's Spring and Autumn Period (771-476 BC). 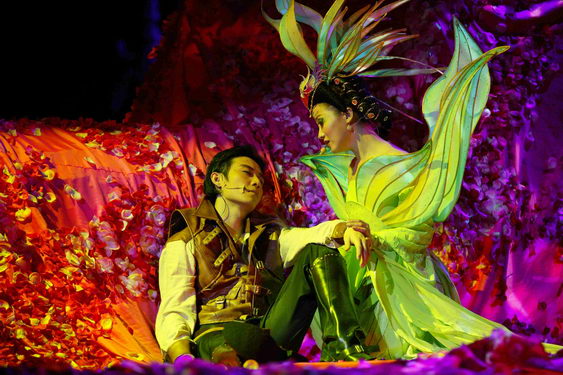 The discovery at the Jinsha site aroused widespread interest and curiosity in the ancient Shu Kingdom, and today, the Jinsha Ruins are considered the second most significant archaeological discovery in Sichuan province, behind the Sanxingdui discovery in Guanghan.

Inspired by discoveries at the Jinsha site, the Jinsha musical was created and first performed in the Beijing Poly Theatre on 8 April, 2005.  On 22 May of the same year, it was staged on Chengdu Jinsha International Theatre and immediately became a hit. The musical portrays the love story of Jin and Sha, a legend that has been known for 3,000 years. There is the humorous Song of Egg which describes the beginning of chaos in the opening act, then Flower Space, which describes the holy lotus world, and the moving and tragic Battlefield scene, which reveals the warring state of ancient Shu. The vivid Song of Working is full of nature of life and inspiration, while the meaningful Forgetting pours out deep affection which leaves a deep impression in the audience's hearts. The melody of the main rhythm I Will Find What Someday At That Time runs through the entire opera and will linger with the audience long after the show is over.

Jinsha musical usually starts at 20:00 and lasts to 21:30 every Friday and Saturday evening at Chengdu Jinsha International Theatre. The ticket price is 180 RMB per person.