The best way to tour China is not only to visit its wonderful sites and numerous attractions but also to mingle with the locals and get to know Chinese culture. Learning some basic Mandarin Chinese phrases helps you to start a conversation while adding a level of depth to your China travels that no simple tour can offer! 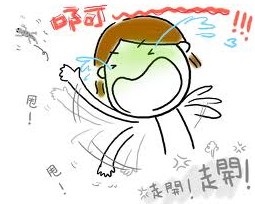 However, what do you say and what do you do when you want to end a conversation? Or more to the point: How do you let a persistent conversation partner know that you are ready to move on? This phrase: 走开 - pronounced "Zǒu kāi,"（which means "go away" in English）is often used by Chinese people if they want someone to leave them alone or give them personal space.

This phrase has the same brusque implication as its English counterparts, as in "go away" or "back off!" But sometimes, a situation warrants a more pressing command rather than just a light request - just be careful when you speak this Chinese phrase to your friends. You don't want to hurt anyone's feelings!

Chinese culture does not have the same mores about personal space or respecting others' privacy as many foreigners are used to and comfortable with, so at times you may feel crowded by an overbearing new friend. If a few gentle rebuffs don't seem to work, take your insistence up a notch to display your frustration and create a little more personal space.

By learning just a few other Chinese phrases and with a little cultural awareness about topics such as the meanings of numbers and current slang being used in China, you are ready to tackle any China adventure - from a Tibet trek to a Beijing cultural tour!

Shanghai
⇀ Shanghai
...
Shanghai ⇀ Hangzhou ⇀ Suzhou ⇀ Nanjing ⇀ Shanghai
12 days
∙ Private ∙
Culture and Heritage
This tour does it all! Five must-see cities and more along eastern China. Each having its individual personality and key attractions you won't miss. No two are alike. Some will say Mout Huangshan is No. 1, but we will want to know your favorite.
Add to shortlist
From US$ 1,450
View tour >