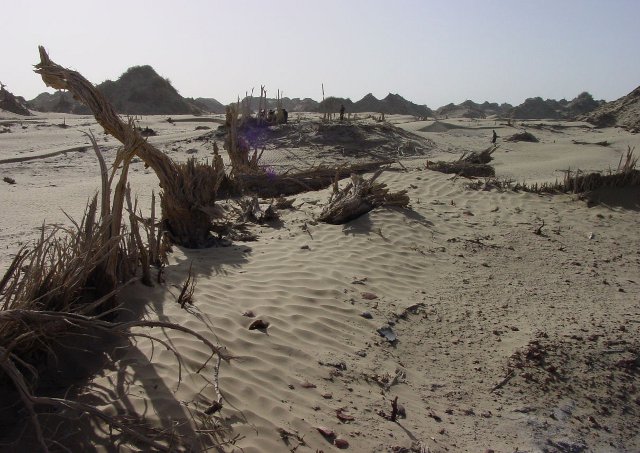 In 1962, it became a key cultural site under the protection of the Autonomous Region and now it's already under national protection.

Niya ancient city used to be a country called Jinjueguo. Most part of its architecture including the earth and wood based houses was well preserved. Ancient rivers and channels run as before recording the vicissitudes of history.

In 1995, the Niya No.1 tomb area was excavated and large quantities of cultural relics were discovered drawing lots of attention from the academia and putting Niya under the glaring light spot.

On its 100 sq.m. (1,076 sq. ft.) land, 8 mausoleums belonging to the upper middle class governing body were unearthed along with a rich variety of objects that were buried together with the deceased.

Among these unearthed articles are earth wares, iron wares, wood wares, lacquers, bows and arrows, and the most fascinating woolen knit wears with delicate and intricate patterns.

Additionally, several historical remains like temples, ancient bridges, orchards,manual workshops and livestock pens were also discovered there earning itself the name of a fantastic ancient metropolis and Pompeii in the East.

Beijing
⇀ Shanghai
...
Beijing ⇀ Xi'an ⇀ Jiuzhaigou ⇀ Chengdu ⇀ Guilin ⇀ Shanghai
15 days
∙ Private ∙
Natural scenery
This China sightseeing tour balances a time to relax yourself in the beautiful scenery of Jiuzhaigou and Guilin. Along with a memorable experience to discover the past, present and future of China in Beijing, Shanghai, and much more.
Add to shortlist
From ¥ 16,000
View tour >

Lhasa
⇀ Lhasa
...
Lhasa ⇀ Tsedang ⇀ Gyantse ⇀ Shigatse ⇀ Mount Everest ⇀ Shigatse ⇀ Lhasa
10 days
∙ Private ∙
Culture and Heritage
A classic route to Everest Base Camp is an indispensable stop on any trip to Tibet. Start from Lhasa and as you head south see the natural beauty of Yamdrok Lake. Trekking the final steps get you close up to the roof of the world Mount Everest.
Add to shortlist
From ¥ 6,600
View tour >