The Epic of King Gesar

The Epic of King Gesar is a great heroic story created by the Tibetans and represents the highest achievement of Tibetan literature. It is the longest epic in the world, the length even exceeding the total of the five most famous epics in the world, that is, Babylonian Gilgamesh, Greek Odyssey and Iliad, Indian Ramayana and Mahabharata.

Background of the Epic of King Gesar

By the means of the integration of romanticism and realism, the epic tells the story how the hero, King Gesar, conquers all the devils and brings happiness to the people with his perseverance and magic strength. The epic also expresses the theme of the people's wish for justice and bliss.

The background of the story spans from the three periods of ancient Tibet: Clanship in the late Prehistoric Times, the Slavery Period, and Serfdom in the Feudal Society. The epic is really an encyclopedia of the social and historical changes, relationships among classes and nationalities, ethnical Tibet culture

Plots of Epic of King Gesar

Long ago, the Tibetans were suffering from natural disasters and vicious devils and living rather a miserable life. To deliver the people from their troubles, the merciful Avalokitesvara or Bodhisattva of Compassion, asked the Amitabha, the master of the western Pure Land, to dispatch a son of a heavenly deity, the later King Gesar, to descend to the world and help the people. Since his birth, King Gesar had begun to exterminate the evils for Tibetans. Then he and his mother along with a tribe 'Ling' migrated beside the Yellow River.

At the age of 12, Gesar won a victory in a horseracing match and then became the leader of the tribe. Since then he began to take the soldiers of his kingdom and banish away all the aggressive devils in the nearby realms. After he finished his glorious missions, King Gesar took his mother and his beautiful empress back to heaven.

History of The Epic of King Gesar 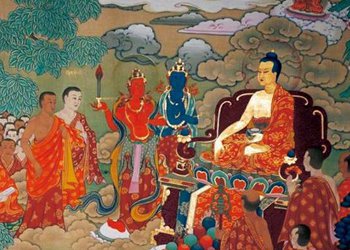 The Epic of King Gesar was created from a collection of ancient legends, myths, verses, proverbs and various other folk Tibet culture. The story was formed between around 200 BC or 300 BC and 600 AD.

In the later years, some folk balladeers continued to pass on the story orally; this enriched the plots and embellished the languages. The story had gradually become near perfect and very popular in the early 12th Century.

The epic began to be compiled mainly by the monks of Nyingmapa (Red Sect of Tibetan Buddhism) in about the 11th Century, and were mainly hand-written books. The present collections of Epic of King Gesar now contain over 120 chapters and more than one million verses; above 20 million characters in all.

The epic has been translated into languages of other brother nationalities of China as well as English, French, Russian, German, Indian and other foreign languages. It has now become a subject on study and is even discussed as a topic in the international seminar.

Relics of The Epic of King Gesar

King Gesar's Lion & Dragon Palace as described in the Epic of King Gesar is in reality situated in the Tra Ling Monastery of Dari County, Golog Tibetan Autonomous Prefecture, Qinghai Province. It is a rebuilt majestic palace of Tibetan style, where the statues of King Gesar and his empress and brave brother soldiers are enshrined. The weapons that King Gesar used in the struggles are displayed in Mayu Exhibition Hall of King Gesar's Relics.

Oral Tradition of The Epic of King Gesar 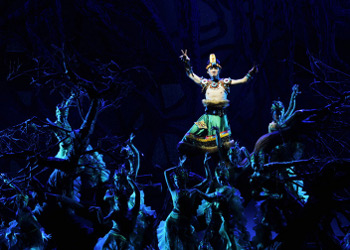 Since its origin, Epic of King Gesar has gotten around from one mouth to another, and has become a tradition and art form to this day. This art form is like a zarzuela, which involves narratives and singing, as well as graphic explanations. It is mainly acted by expert artists in Tibet. The performer usually brings a musical instrument as accompaniment.

Because of the length of the epic, usually only a chapter can be told over several days, but listeners never seem tired of it. The artists always proclaim that they are the avatars of a deity who endow them with a sharp tongue overnight. These artists are succeeded from generation to generation. The most famous artists are the deceased old man Zhaba, the said avatar of a famous general of King Gesar, and the nearly 40-year-old woman Yumei, the said avatar of a concubine of King Gesar.

In addition, Epic of King Gesar also reappeared in the Tibetan Operas . Many songs, dances  and folk legends in Tibet also extract some materials from the story. The paintings and statues on the epic are also worshipped as patron deities by Tibetans.