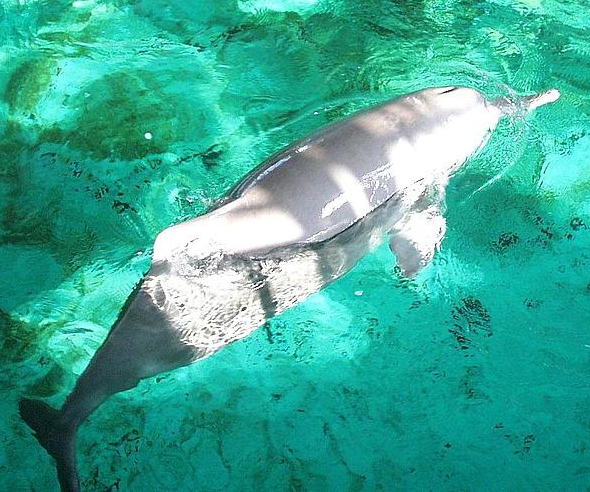 The mammal was declared functionally extinct by international scientists in their failed efforts to spot any surviving ones along the Yangtze River in 2006.

Human activities are believed to have led to its extinction. For example, overfishing has disrupted the food chain; damming has changed its habitats;

Furthermore, dredging in ship channels has spoiled its spawn ground; noise made by nearby factories has messed up the dolphins' sonar-based method of locating food.

Last hope remains, however, as several cases of local fishermen spotting the animal have been reported although unverified over the years. Some advocates that the animal to be cloned as its DNA has been extracted and preserved.

Here's some quick facts about this cryptic creature, as it was not known to the Western world till 1916.

Nicknamed "Goddess of the Yangtze", the animal is also known as Chinese River Dolphin, or Baiji. Scientists estimated that the total amount of Yangtze River Dolphin was less than 50 in 2002.

The Yangtze river basin of China has served as its traditional habitat since 25 million years ago. Animals of the same age includes the Australian duckbill or platypus.

It has been listed as critically endangered animal in 1996, and on the Red list of Threatened Species of ​the International Union for Conservation of Nature (IUCN) in 2010.

Here's a video about the possibly extinct Yangtze River Dolphin from the Natural History Museum.

The Yangtze River Dolphin is actually a very interesting animal. Do you know that it dreams like human beings? Or the fact that it is almost blind and deaf? More interesting facts of the animal are provided below. 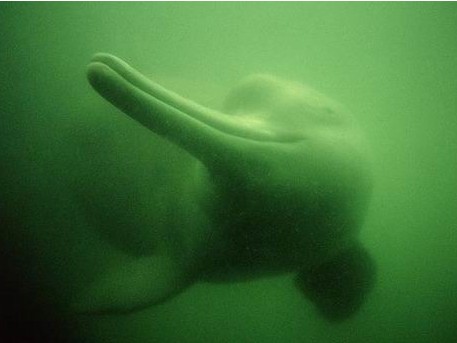 Size: Yangtze River Dolphin is roughly the size of an adult human being (some can grow into 2.5 meters - 8.2 feet long). Female dolphins usually grow larger than male ones. An mature dolphin weighs about 220 kg. (500 pounds).

Appearance: The Yangtze River Dolphin is a graceful freshwater dolphin with a flexible neck. Its long narrow and slightly upturned beak-like snout reminds many of Pinocchio’s nose.

Its “Language”: The dolphins communicate via a series of whistles, clicks and other acoustic signals - true fish talk.

Eating Habits: Although this mild animal actually has 30 - 36 teeth per side of both the upper and lower jaws, it never chew but gobble down whatever fish available. Its really strong digestive system means it has a good appetite and eats great amount of fish everyday.

It Is Smart : Some scholars hold that the Yangtze River Dolphin even outsmarts gibbons and chimpanzee given the facts of its brain weight and unique structure.

Traditional Habitats: Yangtze River Dolphin lives in fresh waters of China, 1,700 km. (1,056 mi.) stretch of the middle-lower reaches of Yangtze River (between Yichang and Shanghai, downstream of the Three Gorges Dam) plus adjacent lakes in particular.

It originates, however, from the oceans like most dolphins. Scientists believe it evolved to become a freshwater species due to the change of sea level. The dolphins swim upstream from the mouth of Yangtze river to give birth to the young every two years.

While living in cold murky waters, it has stable body temperatures similar to that of human beings - 36 C (97 F). The dolphins mostly stay in the vicinity of large eddies in day times, and rest in areas of slow current at night.

How Do They Breathe: Being mammals, it has to float to the top of waters to breathe every two minutes or so. Spotting Yangtze River Dolphin is considered auspicious by local fishermen. Sometimes the dolphins spray water like a whale, and make sounds as they try to breathe.

It needs to be sober in order to breathe properly, however. Being a timid animal, it would freak out when it gets scared! Then it would dive into the river, and be drowned as it is unable to breathe. As a matter of fact, most dolphins are drowned to death when they reach old age. Those accidently caught in fishnets are died of suffocation. 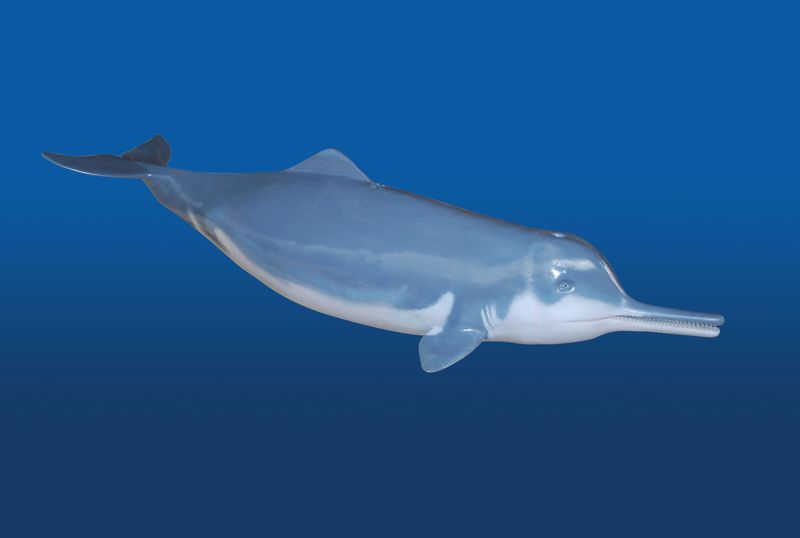 Food Hunting: Although the Yangtze River Dolphins have very small eyes and ears on their head, they are almost blind and deaf.

As they live in muddy waters with poor visibility conditions, the performance of their vision systems reduced severely. You may wonder how can they get food?

They catch their prey in sandy shallows by their innate sonar system which is highly sensitive. The echolocation of their whistles also helps when they search for food.

Unfortunately, sometimes they get confused amidst increasing human activities and may wander into boat propellers.

Fast Swimmer: Smooth skin and streamline body enable the graceful dolphin to be a fast swimmer at 10 - 15 km/h.They run away at the slightest hint of danger.

Lifespan: The average lifespan is around 30 years old, while some can make it to 50 years.

Female dolphins give birth to babies after around 10 - 11 months’ pregnancy. Baby dolphins always stay beside its parents. They are considered adults when they reach 4 - 6 years old.

Their Playmates: They love joining groups, 4 -10 a team, though they are often found in pairs. They occasionally hang out with other river dolphins like finless porpoises.

They Have Dreams! Literal dreams. Their unique brain systems allow them to be half asleep and half wake for approximately 8 hours a day. While in this stage, they would float in the water at a speed less than 5 km/h. The rest of the time, they are widely awake.

In 2002, a captive male Yangtze River Dolphin named 'Qiqi' died of old age after surviving in the Wuhan dolphinarium, a Chinese zoo for over 22 years. It is the first captive dolphin of its kind.

Qiqi was two years old when he was accidentally hunted by fishermen back in January 12, 1980. Due to his bad injury, he was relocated to a huge pool nicknamed “White Palace” built especially for him. 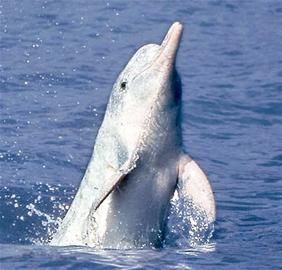 Due to aggregated environment of the traditional habitat of the Yangtze River Dolphin, the dolphinarium thought it was for the better of Qiqi to keep him under human attention, and deem him as a valuable research sample for river dolphin protection.

At first, Qiqi was afraid of people and restless. Gradually, however, he became really close to the staff, and would swim towards them to welcome them upon their entrance into the zoo.

In 1986, the zoo thought it was time for the 8-year-old Qiqi to have a family. They found two female companions for Qiqi.

Unfortunately, these two dolphins did not adapt to the environment as well as Qiqi, and the zoo was unable to find any more of his peers. So Qiqi remained alone and lonely for most of his life.

Though critically ill for a couple of times, Qiqi managed to survive for 22 years in the zoo.

A ten-year-old child in China started to donate his pocket money to Qiqi on a monthly-basis when the Baiji Protection Fund was established in 1997. It became the last gift from human beings when Qiqi passed away in 2007.

Being such an adorable and interesting animal, Qiqi’s story touched the heart of millions. Yangtze River Dolphin’s possible extinction reminds us just how urgent the task is to protect other endangered species before it’s too late.

People in China are overjoyed when they hear any news of suspected dolphin finding. As a matter of fact, many WindhorseTour clients who took the Yangtze river cruise carried with them the secret hope of spotting any Yangtze River Dolphin. Some have been the lucky few to see the river dolphins, another endangered specie while on their cruise trip along the Yangtze river.

Being the habitat of the Yangtze River Dolphin and other river dolphins, the Yangtze river boasts breath-taking natural scenery as well as rich historical sites along its bank.

Attractions along the majestic river, one of the three longest rivers in the world, includes the Three Gorge, Fengdu Ghost city and the Shennong Stream.

Taking a cruise allows you to fully appreciate its beauty. The best part about the cruise trip is the anticipation of spotting dolphins.