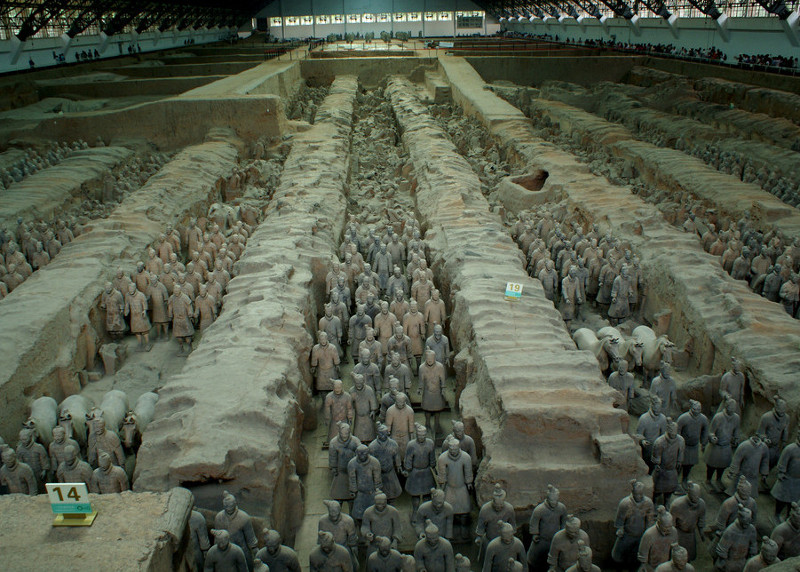 Terracotta Army (兵马俑; bīngmǎ yǒng in Chinese pinyin), also known as Terra Cotta Warriors and Horses, is a collection of soldier and horse funerary statues discovered in Xi'an, Shaanxi Province. It's buried along with Qin Shi Huang (秦始皇; the first emperor of China) as his corps to help guard the grand empire in his afterlife. Nowadays, it is widely recognized as the Eighth Wonder in the world and the greatest discovery in world archeological history. In 1987, Terracotta Army was listed as a world heritage by UNESCO.

According to Shih Chi (史记), Qin Shi Huang began to build his mausoleum right when he came to power at the age of thirteen. It was designed by the then prime minister Lisi (李斯) and supervised by senior general Zhanghan (章邯). The painstaking and massive construction work lasted for 38 long years. Covering an area of 56.25 sq. km (21.7 sq. mi.), it is as large as 78 Forbidden Cities in size creating a big sensation in the archeological community. 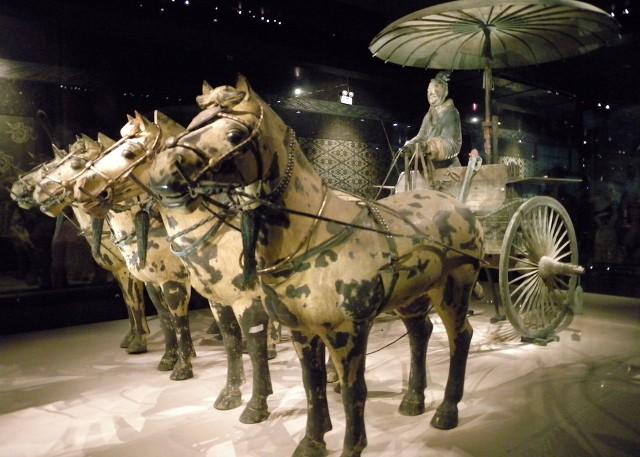 The mausoleum of Qin Emperor is located at the foot of Li Mountain (骊山), east of Lintong District, 30 kilometers or so from Xi'an. The Terracotta Army, buried in three large pits taking the shape of a Chinese character Pin (品), lies 1,500 m. (4,921 ft.) east of the mausoleum. The rectangular No 1 pit was first discovered accidentally by a group of farmers who were digging a water well 2,400 m. (7,874 ft.) north of Li Mountain. Since then, the second and the third pits were discovered by archeological workers subsequently.

What is unique and special about the Terracotta Army is the grand procession created by ranks of soldier figurines. They made to be of different heights based on the rank of titles and neither one of them looks similar to the other; they are elaborately designed with rich and varied facial expressions. It is estimated that in No.2 pit alone, 8,000 soldiers and horses, 100 chariots and large amount of cultural relics like weapons were found. In No.1and 3 pits, there are approximately 7,300 soldiers and horses and 90 chariots in total.

For the pottery statues, each part of their body is made separately first and then assembled to make a complete soldier. Originally, they were painted with different colors, but after they are exposed to the air, the colored paint is gone. Today this massive array of troops consisting of infantry, cavalry, and generals together with the spectacular necropolis of the emperor make the largest ancient underground military museum.

Leshan
1 day
∙ Private ∙
Leshan Grand Buddha is renowned for the world's largest sitting buddha. At 71 m. (233 ft.) high, it took over 100 years to carve into a cliff in hopes of calming the merging rivers below. Take this 1 day tour to explore this massive creation.
Add to shortlist
From € 73
View tour >