The dramatic scenery and rushing waters of the river have been inspirational to many of China 's painters and poets. The most impressive section of the river is the three Yangtze River gorges: the Qutang Gorge, Wuxia Gorge and Xiling Gorge, collectively known as the Sanxia, or Three Gorges.

The Yangtze Three Gorges is a great valley with a most splendid landscape in the Yangtze (Changjiang) River and it is one of the ten most famous scenic sites of China . It extends from White Emperor City in Fengjie County , Chongqing Municipality to Nanjin Pass in Yichang , Hubei Province, consisting of Qutang Gorge, Wu Gorge and Xiling Gorge, which converges the essence of the scenery on the Yangtze River , with a full length of 193 km.

The Yangtze Gorges presents a scene of boundless variety with the magnificence of Qutang Gorge (8 km), the elegance of Wu Gorge (42 km), the perilousness of Xiling Gorge (76 km) as well as the primitive simplicity and the mysteriousness of the Daning River, Xiangxi stream and Shennong Stream, which flow into the great valley. The whole landscape is so kaleidoscopic. It is picturesque everywhere, and what more, each scene is related to a wonderful fairy tale or a moving legend which will kindle your meditation on the remote past.

Qutang Gorge
Qutang Gorge, the first of the three Yangtze Gorges, runs eight kilometers from Baidicheng (White Emperor City) in Fengjie County in the west to Daxizhen in Wushan County, Chongqing City. It is best known for its steep precipices that form an enormous gateway over the river. With only 8 kilometers long, Qutang Gorge is the shortest and narrowest but also the most spectacular of the Three Gorges. The widest point measures only 150 meters wide. The mountains on either side reach as high as 1200 meters. This combination of narrow canyons among high mountains with several switchbacks in only 8 kilometers creates spectacular vistas, and the Qutang Gorge is often considered the most beautiful of all the Three Gorges.

Wu Gorge
When the river flows out of Qutang Gorge and passes the broad valley of the Daning River, it enters the scenic Wu Gorge. Wu Gorge is home to the famous 12 peaks of the Wushan Mountains. It's 45 kilometers long, extending west to east from the mouth of the Daning River in Wushan County to Guandukou in Badong County, Hubei Province. Noted for its deepness, serenity and elegance, Wuxia Gorge is full of zigzag, weird peaks, rising mists and beautiful sights. The famous Twelve Peaks on both banks of the river, in particular, are the most spectacular. Among them, the most fabulous is the Peak of Goddess. It pierces through the heaven and towers over the Yangtze River. 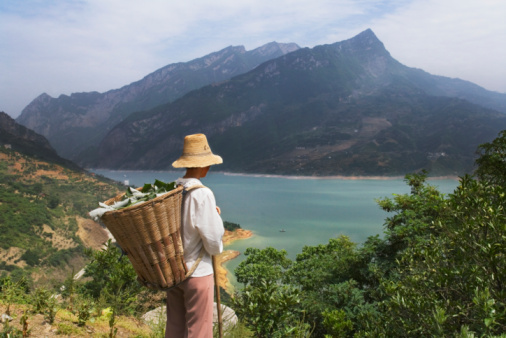 As the longest among the Yangtze Gorges, Xiling Gorge stretches west to east for 76 kilometers from the mouth of the Xiangxi River at Zigui in Hubei Province to Nanjing Pass near the city of Yichang in Hubei. It is divided into the west section and the east section with each consists of several small unique gorges. Along Xiling gorge sit many archeological sites, including the Huangling Temple, first built during the Three Kingdoms Period (220-280). In addition, the Three Visitors' Cave and the Luyou Fountain all have their unique features.

Xiling Gorge is known for its hidden reefs, perilous cliffs and tumbling rapids, as well as the orange groves and tea plantations on its shores. At some points there are treacherous whirlpools and the waters are extraordinarily turbulent.

Chongqing
⇀ Yichang
...
Chongqing ⇀ Yangtze Cruise ⇀ Yichang
4 days
∙ Private ∙
1st Time travel to China
Taking a cruise on the Yangtze River gives you a chance to enjoy the leisure time surrounded by the water and the sky without missing the most essential scenic spots of the breathtaking Yangtze Three Gorges.
Add to shortlist
From ¥ 2,900
View tour >

Chongqing
⇀ Zhangjiajie
...
Chongqing ⇀ Yangtze Cruise ⇀ Zhangjiajie
7 days
∙ Private ∙
Natural scenery
Start this tour with a Chongqing Yangtze River cruise, where you will view the natural beauty along both banks. Followed by an adventure in Zhangjiajie, which is famous for the splendid peaks. Much more awaits in this amazing journey.
Add to shortlist
From ¥ 5,600
View tour >