The famed “Ice City” Harbin is in China’s bitterly cold far north, settled on the south bank of the Songhua River. Its temperatures can plunge to as low as minus 40 degrees Celsius in winter. Thanks to the somewhat severe winter, Harbin becomes a winter hotspot with gorgeous winter scenery and spectacular ice festivals. Owing to its historic railway line with Russia to cut down journey times on the Trans-Siberian Railway, Harbin has also made a name for itself as the “Oriental Moscow” with many well-preserved Russian architectures constructed in the early 20-century. For travelers who fancy the snow and ice during their China tour, they shouldn't miss this largest city in China’s north-eastern Heilongjiang Province. 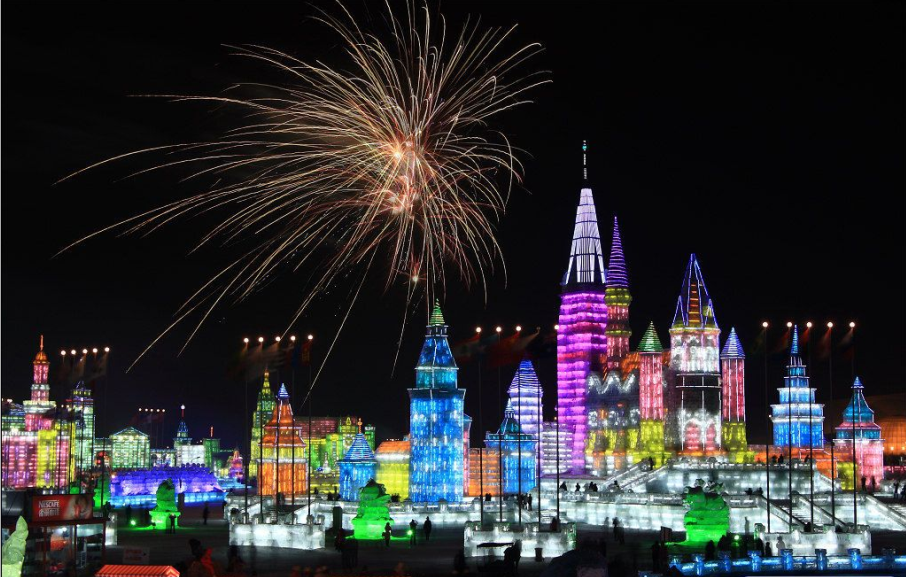 Top things to see and do in Harbin

Relish a visit to Harbin Ice and Snow World

Harbin Ice and Snow World, the world’s top ice and snow amusement park, predominantly showcases the finest and astonishing ice sculptures. It is an amazing experience to explore this photogenic wonderland when the illuminated ice sculptures create an eye-catching burst of color at night. Apart from appreciating the spectacular ice sculptures, the park is fun-filled with ice mazes, ice bikes, snow slides, etc. And the unforeseeable live concerts and ever-changing themes are a bonus to attract repeat visitors.

View a Fairyland of Snow at Sun Island

Sun Island, lying on the north bank of Songhua River, is a 38-square-kilometers scenic area for entertainment, including a ‘water world’, a ‘Russian-style’ town, landscaped gardens, and many small-scaled galleries and museums. During the Ice & Snow Festival, it becomes an ethereal snow fairyland, displaying extraordinary building-sized snow sculptures that are different from the ice sculptures of the Ice & Snow World. While most visitors come to the Ice and Snow World when night falls, Sun Island offers a less hectic experience with a great visual feast of white during the daytime.

Zhaolin Park, the oldest park of Harbin for locals to have a laid-back time with enjoyable natural scenery, is named after Zhaolin Li, a general who made a great contribution to China during the Second World War. As one of the three main venues of the Ice and Snow Festival, another two are Ice and Snow World and Sun Island mentioned above, Zhaolin Park holds an annual joyous Ice Lantern Show which gives birth to an unrepeatable imaginary world with numerous gorgeous ice landscape and ice lanterns created by ingenious artisans and craftsmen. 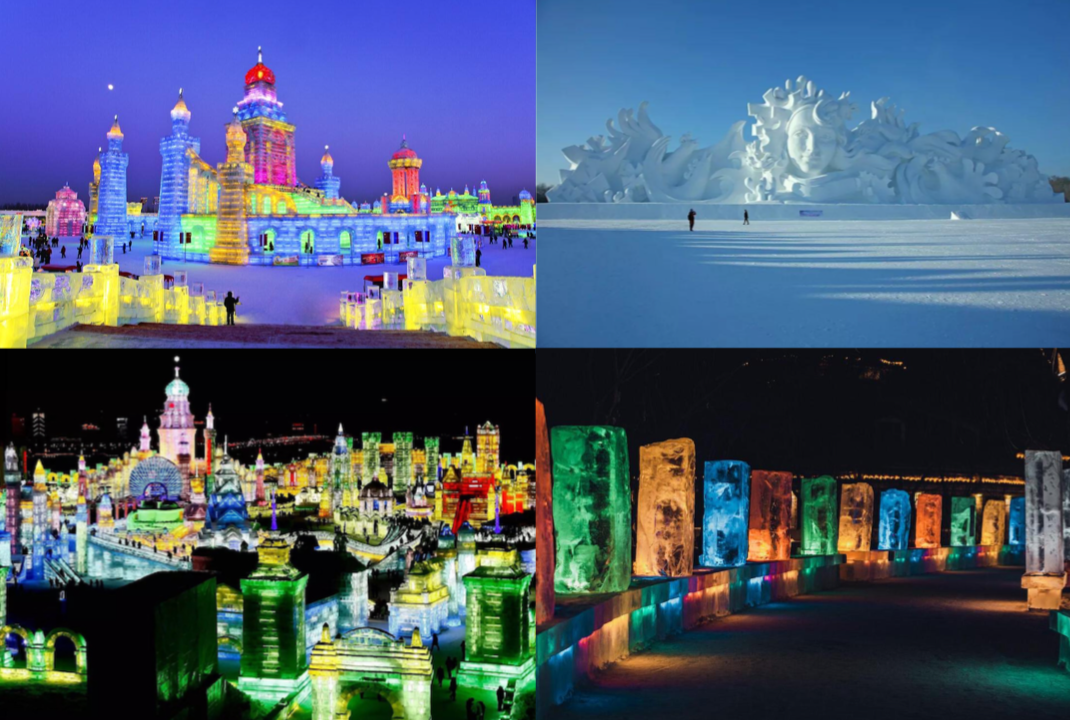 Stalin Park, facing Sun Island to the north, runs 1,750m-long along the embankment constructed to control the unbridled Songhua River. The park is a pleasant gateway to escape from the scorching heat in summer, with tree-lined walkways, different themed statues, Russian-style buildings, playgrounds, and cafes. When the Songhua River is frozen sturdy in midwinter, locals flock to the park for skating, sledding, winter swimming, and catching fishes under the ice. Just choose one of the activities and join locals to enjoy the most charming season of Harbin.

Located about 220KM from Harbin city, Yabuli is the largest ski resort in China, providing the country’s largest ski jumping facilities and the Asian longest ski trail. Expanded to three mountains with 46 trails and 25 ropeways, Yabuli Ski Resort has an excellent partition of advanced, intermediate, and beginner runs. In every winter from mid-November to late-March, it is a wonderful snow world for either professional skiers or ski amateurs, with professional equipment and multiple awesome snow activities provided.

St. Sophia Cathedral, the most famous landmark of Harbin, is an ideal example of Byzantine-style architecture, with its visible red brick-wood structure crowned by a green onion dome and the gilded spire top cross. As a former Russian Orthodox church originally built in 1907, it was expanded to be the largest Orthodox church in the Far East in 1932, and served as the Municipal Architecture and Art Museum from 1997 till now, hosting a photographic exhibition of Harbin’s multi-cultural architectural developments over the years. 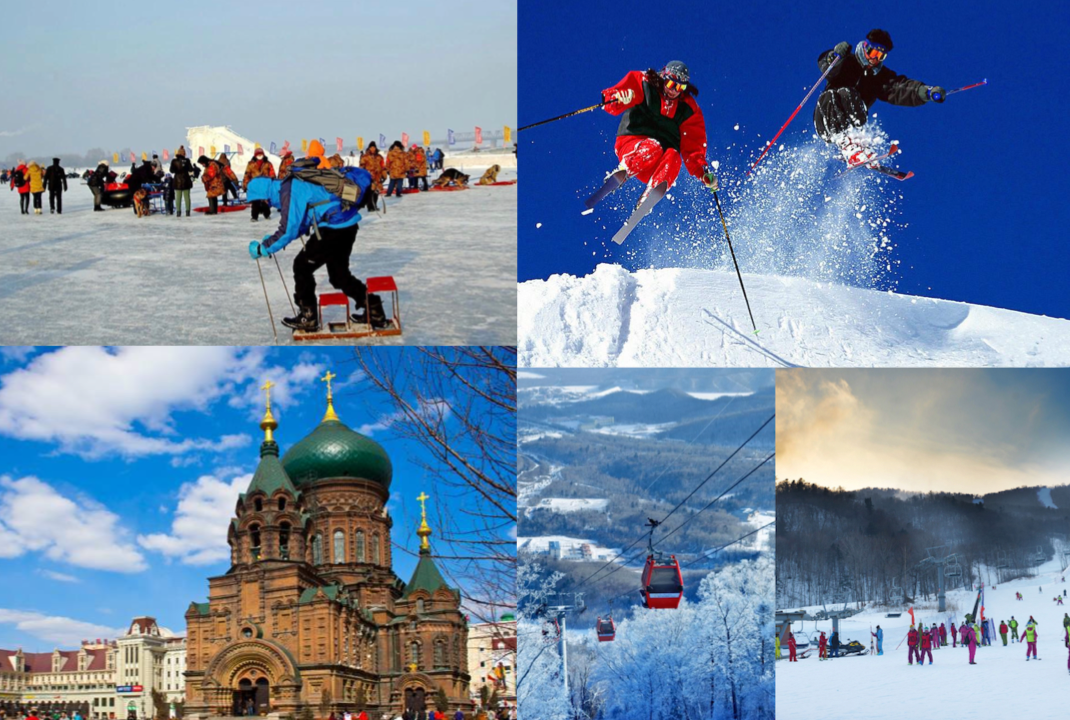 Stroll along the Centuries-Old Zhongyang Street

Zhongyang Street, a cobblestone pedestrian street, is the most obvious legacy of Russia’s affection in Harbin. Lined with buildings that date back to the early 20th century, the street is a rare art gallery to admire a fascinating mixture of exotic architectures, including antique Renaissance buildings, distinctive Baroque and Byzantine appearances, traditional Jewish architecture, classical Russian structures, and French-styled boutiques. Being reputed as the No. 1 Street in Asia, the street gets more vigorous at night, when the thirsty visitors are tempted by its beer gardens and live music.

Embark on an Adventure in Siberian Tiger Park

Located on the north shore of Songhua River, the park boasts the world’s largest artificial breeding base of Siberian tigers, with a sprawling complex of about 1.44 million square meters. Compared to zoos which have a few examples of a rare animal and pretend to “save the species”, this park is large enough to have nearly doubled the tiger populations since it opened in 1996. Except for this largest feline, the park also offers an impressive collection of other large cats from all over the world, including African lions, Bengali tigers, and cougars, as well as a rare opportunity to pet and hold the cute Siberian tiger cub.

The Unit 731 Museum is set on the site of Unit 731, a notorious germ-warfare experimental base operated by the Japanese army during WWII, just like the Auschwitz Concentration Camp. It is located in the south suburb of Harbin, about one hour’s drive away from the city. Displaying a series of photos, imitating scenes, equipment exhibitions, it serves as a memorial to the victims, mostly Chinese, who suffered and died from the horrific tests, including being frozen alive, vivisection, and being infected with plague, syphilis, or other infectious diseases. 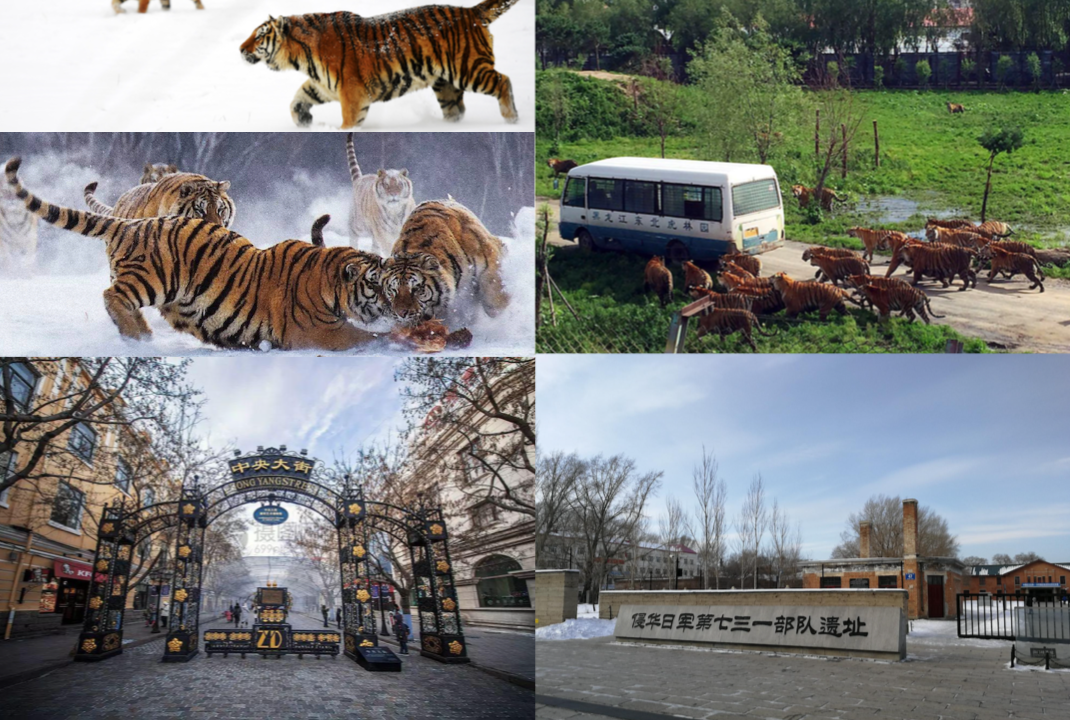 Special activities and experiences in Harbin

Harbin annually hosts China’s coldest festival - International Ice and Snow Festival from end-December to end-February (which can be extended to even mid-March when weather permits), attracting a great majority of visitors for exhibitions of ice and snow sculptures. Even Harbin’s winter is bitter with minus 13˚C on a good day, it’s well worth braving the cold to appreciate a cluster of artistic sculptures which are usually record-breaking sized and kept firm by subzero temperatures. When illuminated at night, the sculptures are attached to a bizarre kaleidoscope of color and present sparkling renditions of architectural marvels, folk tales, and ancestral crafts. The festivities are concentrated in the three main venues: the grandiose Harbin Ice & Snow World, the less bustling Sun Island, and the intimate Zhaolin Park.

With a beer culture of over 100 years, Harbin is the first city to brew beer in China. This venerable Ice City becomes a beer carnival in July when the International Beer Festival is launched at the Ice and Snow World, with a theme ‘Meet the century-old hometown of beer, Inherit and spread the romantic beer culture’. In the matter of scale and capacity, it is strictly larger than the one held in Munich. The festival normally lasts about 10 days with a set of activities featuring an attractive firework display, exciting beer-drinking competitions, exhilarating live musical acts, entertaining performances, and, of course, plenty of cool beer from domestic and foreign beer brewers.

Set up as a trading hub for merchants and businessmen from both Russia and China, the Sino-Russia Market is located in Jianshe Street of Nangang District. Consisting of five cross-streets with two indoor halls and more than 2,500 stalls, the “well” shaped market displays a dazzling array of Chinese and Russian goods, including furs, clothing, handicrafts, souvenirs, daily necessities, and military gear. The market is available every day, and most stores and restaurants run from 10-11 am till 11 pm. If you want to get the real price for your purchase, bargaining is a must. 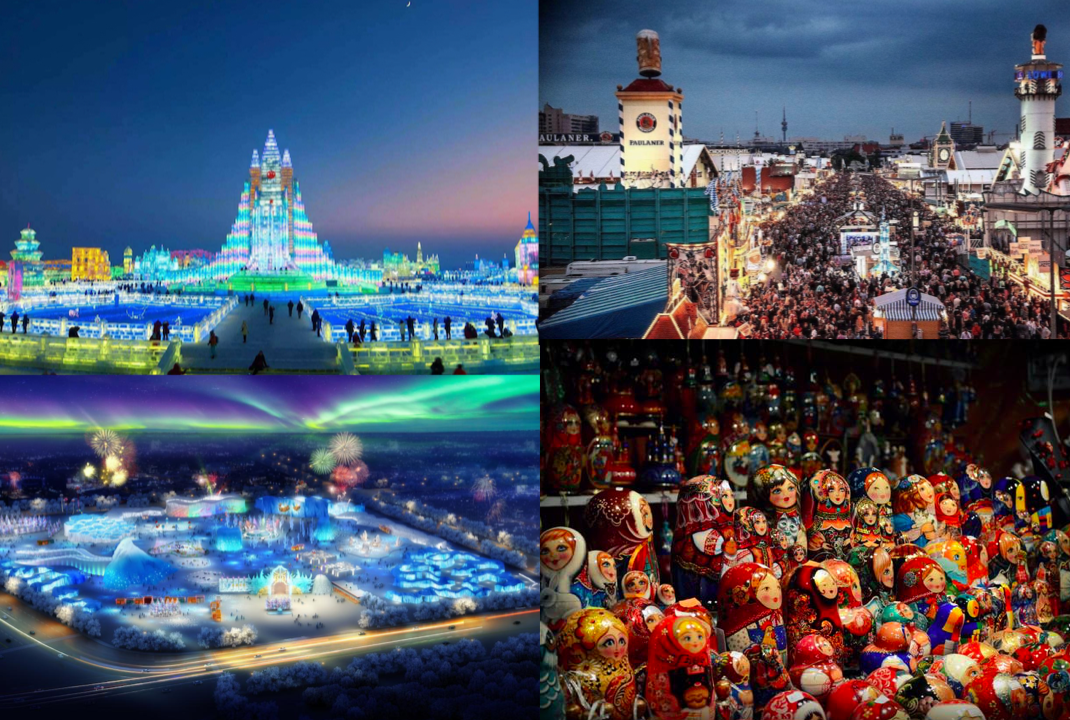 The best time to visit Harbin is late December through early March of the next year. Though this period does offer the most chill weather of the year, with an average temperature of -13˚C to -24˚C, it has its own charms with the famous International Ice and Snow Festival and plenty of winter activities. Besides winter, Harbin is also a good destination for traveling in the summer from July to September, with a cool and comfortable temperature ranging from 22˚C to 24˚C. 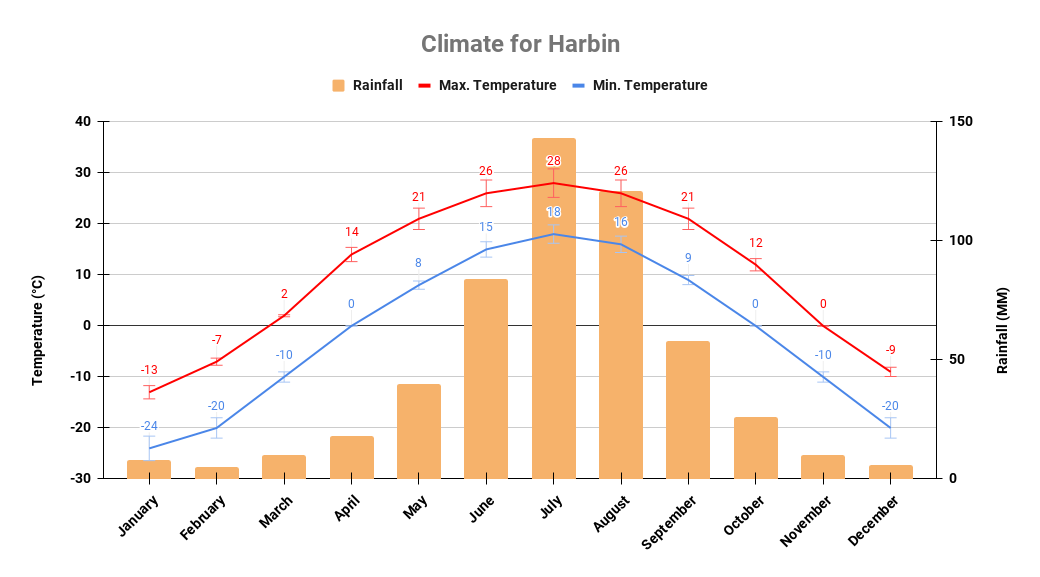 How to get to Harbin

There are plenty of options to get to Harbin, but many travelers want to take the flight or high-speed train. Flying is the fastest way to connect Harbin with popular international cities like Moscow, Seoul, Tokyo, etc., or domestic cities like Beijing, Shanghai, Guangzhou, etc. From the Harbin Taiping International Airport to the downtown area, it is about 41KM away and requires 40 minutes’ driving. High-speed trains are another convenient option with a cheaper price, and the train journey isn’t unbearably long for travelers from Changchun, Shenyang, Jilin, Dalian, and Tianjin. The high-speed train station - Harbin West station is about 10KM (25 minutes' drive) away from the downtown hotels.

Lodging and dining in Harbin

Harbin offers a wide range of choices concerning accommodation, from cheap stays to luxury 5-star hotels, ranging from CN¥ 200 to CN¥ 1,500 per person. For travelers who are limited on time but want to visit a lot of places, we would recommend choosing the hotel in Daoli District, a more convenient location to Ice and Snow World as well as other popular attractions like Zhongyang Street, St. Sophia Cathedral, Stalin Park. Also, Nangang District, Harbin West Railway Station and around, and River North in Songbei District are other frequent choices for travelers. 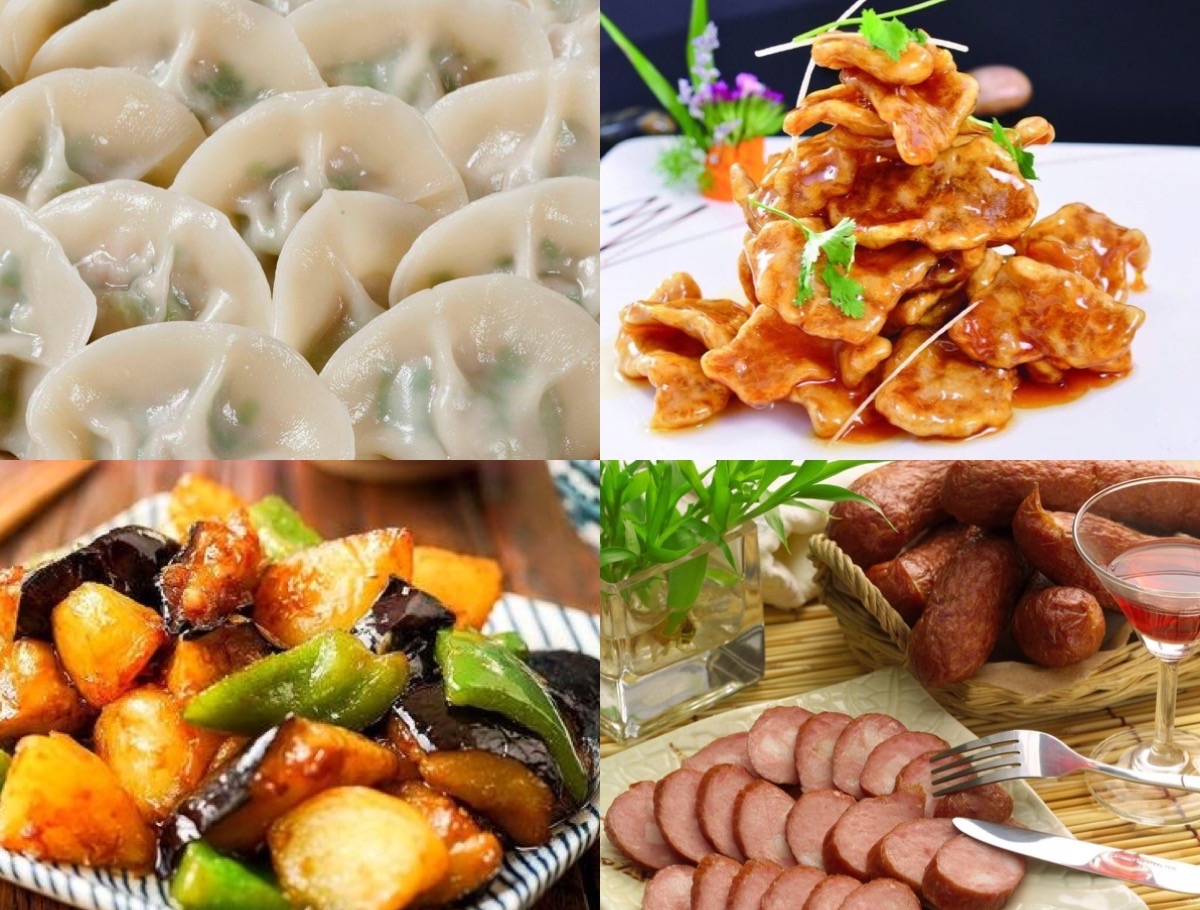 The blend of local Manchu cuisine and exotic Russian cuisine gives birth to Harbin’s specialized cuisine. Harbin dishes are mainly featured by dense and heavy flavors, while the original flavor is maintained with few spices. We highly recommend trying the local eateries that specialize in Northeastern Chinese food, like boiled dumplings, Guobaorou (Crispy Sweet and Sour Pork), Disanxian (a plate of potato, green peppers, and eggplant), etc. These hearty dishes just remind you of the warm-hearted locals you met along the way. Besides, there are many Russian restaurants abound in the city, providing authentic flavored Russian Cuisine, such as the beet-red borsch and steaks.