Best Time to travel to Mount Everest Base Camp in Tibet

Everest Base Camp in Tibet, with an altitude of 5,200 meters (17,060ft), is located about 100KM southwards Shegar (also called New Tingri), a small town on China-Nepal Friendship Highway. It is a must-see attraction for most of the travelers during their Tibet tour. With only 19KM’s (11.8 miles) straight line distance from Mount Everest summit, the Everest Base Camp is one of the ideal points to enjoy the spectacular view of the north face of Mountain Everest - the world's highest peak. Besides, Mount Everest Base Camp in Tibet is also the starting point for the Everest Northside expeditions.

To appreciate the gorgeous scenery as much as possible, travelers may wonder: when is the best time to visit Mt. Everest Base Camp in Tibet, is it suitable for traveling all year round and what's the whole year’s weather and climate there? Let us go through the information below to learn more about it. 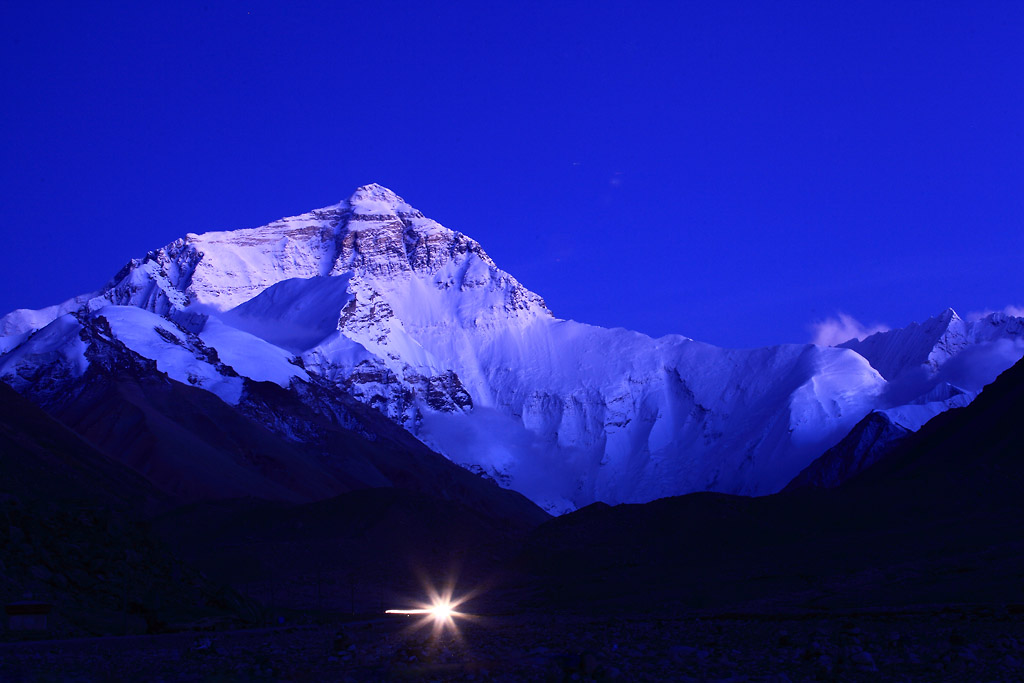 1. Best time to visit Mount Everest Base Camp in Tibet

Generally, the marvelous Everest Base Camp attracts numerous universal visitors every year, while the best seasons to visit Mountain Everest Base Camp, so as to Everest expedition, are from April to early June and mid-September to October.

For the travelers and photographers, the best months to visit Everest should be from April to June and September to November, due to its more stable weather and greater visibility, you will have the best chance to see the magnificent Mountain Everest’s true face.

While for the mountaineers who want to conquer Mount Everest, the best months start from late April to early June and mid-September to early October, the stable and good weather of these periods helps to climb Mountain Everest easier and safer. The monsoon season there with the largest precipitation is from mid-June to mid-September, while the windy season with the highest wind speed lasts from November till the next March, both seasons are not suitable for climbing.

For the trekking lovers, the best months to trek to Everest Base Camp would be from late April to June, then September to October, as most days of these months are with lovely daytime temperatures above freezing, clear and blue sky, puffy white clouds and plenty of daylight, which is ideal for trekking. 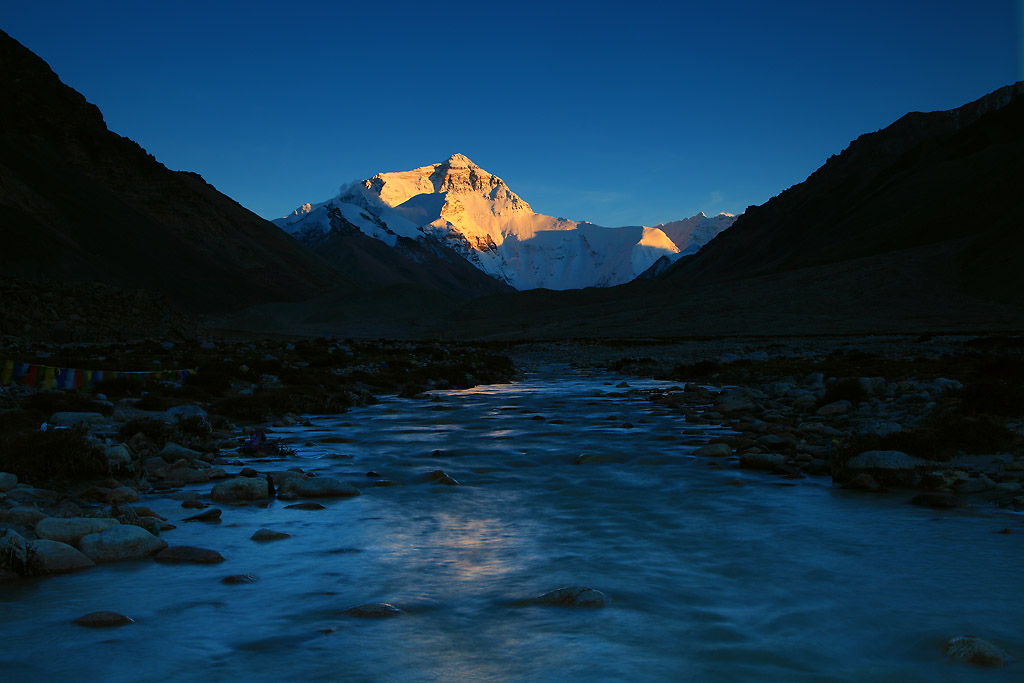 One of our main goals for traveling is to catch more beautiful scenery and to take some nice pictures, therefore, we need to know not only the best months/seasons to travel to Mt. Everest Base Camp but also the best shooting time to take beautiful photos of Mt. Everest.

Generally, the best shooting time is 1 hour before or after the sunrise or sunset at Mt. Everest. If you shoot at Rongbuk Monastery or Mount Everest Base Camp, due to the shape of Mt. Everest and the angle, Everest in the sunset is more charming than Everest in the morning glow. Here is a timetable of Mount Everest Base Camp approx. sunrise and sunset which is based on the 1st day of every month in 2020. 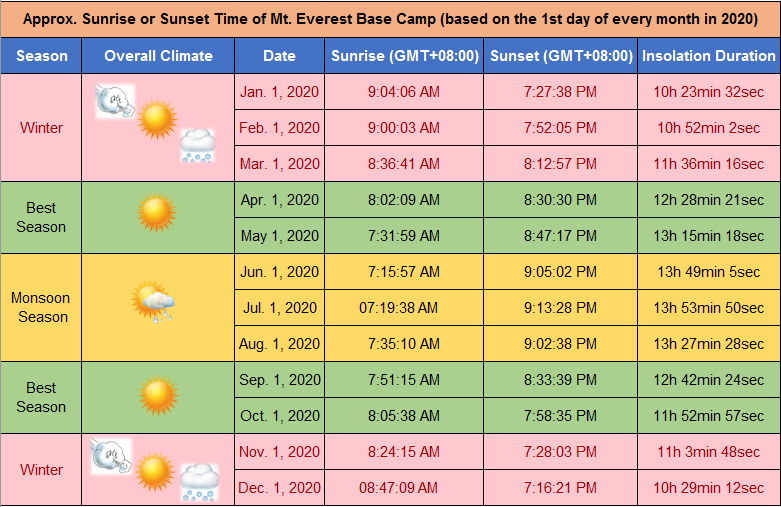 With an average temperature of -6℃~10℃ and a big temperature gap between day and night, we would suggest bringing some winter clothes and dressing in layers to keep you warm, especially at night, as no heating system is available there. Dressing including sweater, down jacket, lightweight long underwear, short-sleeved shirts, waterproof breathable jacket & pants, scarf, gloves, and hat is highly recommended. 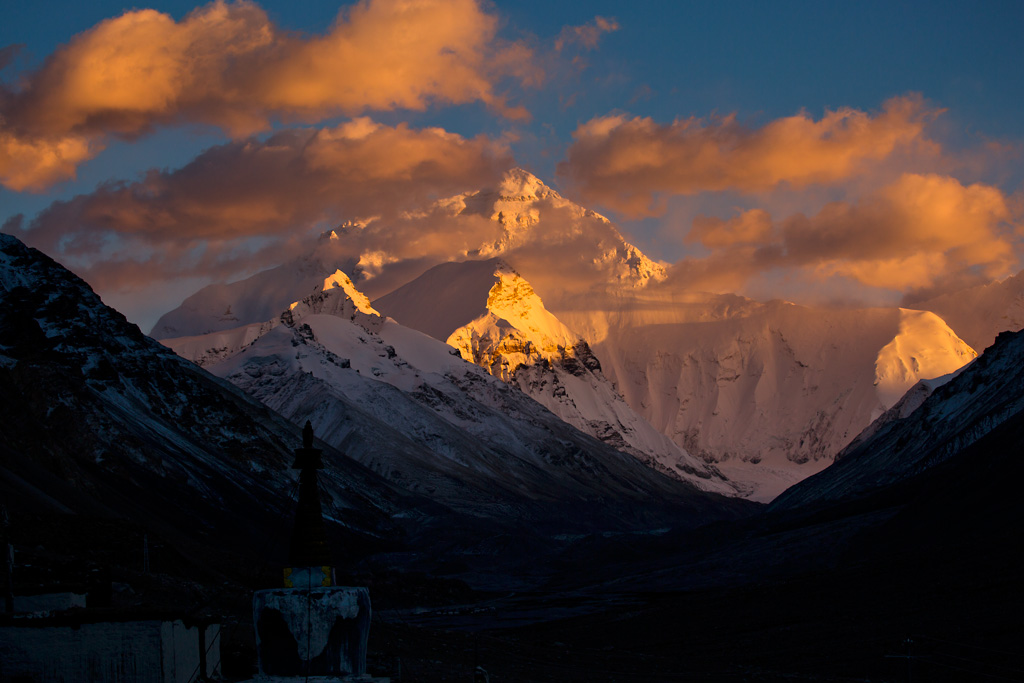 2. The climate of the Mount Everest region in Tibet 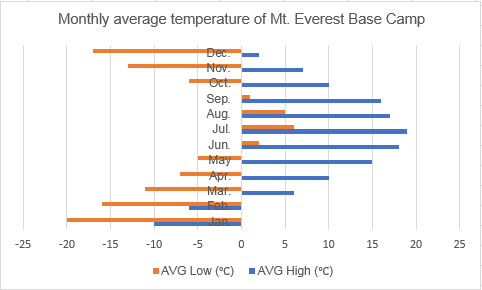 Generally speaking, due to its high altitude, it enjoys cold weather with relatively lower temperatures all year round, a large temperature difference between day and night, and unpredictable and changeable weather conditions. Besides, its seasonal change is small and the whole year can be mainly divided into the dry and windy season and monsoon season.

Spring (April to May)

Spring in April and May is with an average temperature between -6℃~10℃ and most days of both months are clear and sunny, besides, the wind is gentler which makes it one of the best seasons for expeditions at Mount Everest region. The weather there is more pleasant and much warmer than the weather in Winter as the strong Northwest cold wave gradually disappears while the Southeast monsoon hasn’t come yet.

Besides, April and May are considered as the shoulder season to travel to Mt. Everest Base Camp as there are fewer travelers traveling there and the price is slightly cheaper than the peak season.

Summer of Mount Everest Base Camp in Tibet is from late June to August and with an average temperature 4℃~18℃. It is also the monsoon season of Mount Everest Base Camp in Tibet. Strong southeast monsoon will cause heavy rains, it gains the most rainfalls of the whole year, especially in July (Precipitation: 94 mm) and August (Precipitation: 108 mm), and severe weather with snow often arrives unexpectedly.

It might be a good time to travel to the other places of Tibet as it is the warmest time of the year, the grasslands and trees during this period turn to green, everything there is so vibrant. However, it is not the best time to visit Mount Everest Base Camp as Mount Everest is often covered by the mist or thick clouds which makes it hardly seen.

Furthermore, it is the peak season to travel to Mount Everest Base Camp which gets the greatest number of tourists from all over the world, especially July and August which belong to the high peak season. Besides, during this period, the tour cost from the accommodation, transportation to guide are at their highest.

Just as Spring in Tibet, Autumn in Tibet could be quite short too, only September and October, however, with an average temperature of 6℃~14℃, the weather in Autumn is cooler and more adorable than in Summer. Additionally, due to the retreat of the southeast monsoon, lots of clear and sunny days come, which is suitable for outdoor activities and makes it ideal to trek from Old Tingri to Mount Everest Base Camp, besides, Mount Everest presents its true face clearly to the tourists.

Due to the lovely weather and beautiful autumn scenery, many travelers will choose to travel to Mount Everest Base Camp this season too, however, compared with the high peak season ( July and August in Summer), it gains fewer tourists and tour cost is a little cheaper.

Winter (November to the next March)

Winter is widely considered as the cold, dry and windy season of Tibet. With the disappearance of the Southeast monsoon, the strong Northwest cold wave begins to occupy the entire Tibet, and it could last from November till the next March, in this case, the temperature drops vastly with an average temperature of -22℃~-5℃.

However, the weather in the daytime is not as cold as you imagine, due to the less precipitation and almost no dense clouds, you can see the sun hanging in the sky clearly most days and you will be wrapped by the warm sunshine. Comparing lots of places in mainland China, here is even much warmer. But because of the strong wind, you might still feel a bit cold. Besides, there is a dramatic temperature change between day and night, so heavier winter gear is required to bring with you if you travel to Mount Everest Base Camp in Winter.

Except for its severe cold and heavy snow, it is considered as a good time to visit Mount Everest Base Camp because the clear sky with sufficient sunshine and high visibility without mist/cloud offer a great chance to enjoy the spectacular snowy scenery of Mount Everest which is bathed in brilliant and golden sunshine.

Moreover, winter is also the low season to travel to Mount Everest Base Camp. With the least tourists of a year, you can enjoy your leisure and relax time at a tranquil and original world only with sunshine, snow-capped mountains, and local Tibetans. Furthermore, the tour cost is at its cheapest. Therefore it is a good season for tourists looking for a budget trip to Mount Everest Base Camp. 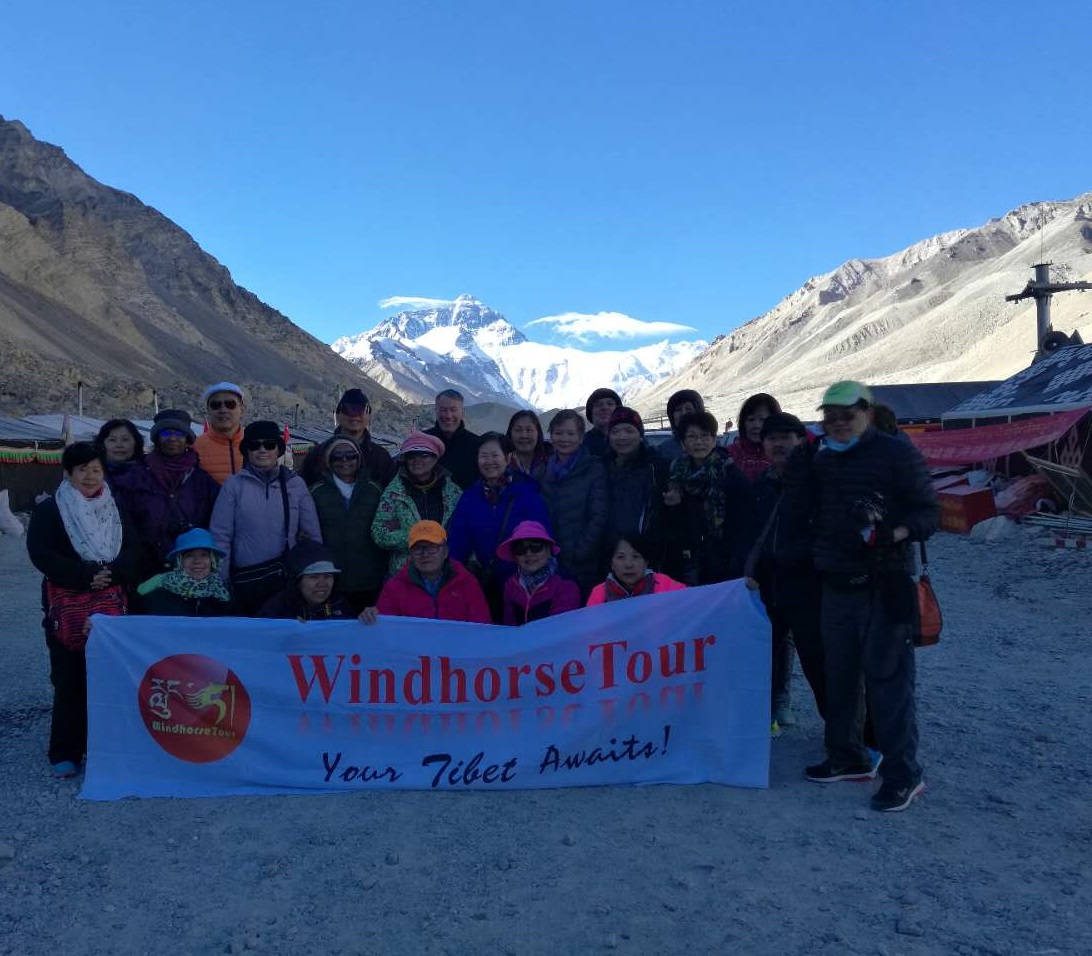 No matter what time you plan to travel to Mt. Everest Base Camp, you should be aware of and follow its local policy and the actual situation. Go through the tips below to prepare well for your trip.

3. Tips for traveling to Mount Everest Base Camp in Tibet

Attracted by the gorgeous view of Mt. Everest Base Camp and can’t wait to plan a trip there, but have no idea about how to arrange it, check out our popular Mount Everest Base Camp tour to get some inspiration. If the tours listed are not so attractive for you, contact us at (+86-28-85593923/info@windhorsetour.com) or leave us a comment to share your special requirements and interests with us. After helping thousands of clients over 10 years, we are quite confident to tailor-make your unique tour and assist you to design a perfect trip.

How to calculate the cost
Tibetan medicine
Tibet Mountains and Mountain Ranges in Tibet
High altitude sickness
Top reasons to travel Tibet in winter
Tibet Autonomous Region vs. the Tibetan Area
How to avoid high-altitude sickness in Tibet
Tibet weather and climate