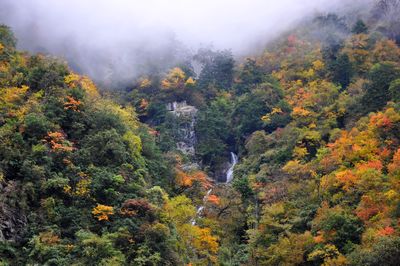 It is located in Wenchuan County, a 4-hour drive from Chengdu, is a comprehensive state natural reserve of 200,000 hectares. Begun in 1963, Wolong Panda Reserve is the earliest, largest and best-known panda reserve in China. It was placed on UNESCO Man and Biosphere Reserve Network in 1980. Sixty-seven captive pandas are among 150 pandas in Wolong Panda Reserve managed by the China Conservation and Research Center for the Giant Panda. The Center was founded in 1980 with assistance from World Wildlife Fund. Hi-tech is commonplace in the Research Center, which is a world leader in propagating the panda species. Tourists can take pictures with mice-like panda babies.

People from all nations are welcome to adopt pandas through naming them with an accompanying donation. Pandas are national treasures and also goodwill ambassadors. Wildlife observation spots opened in Wolong Panda Reserve attract explorers, tourists, animal-lovers as well as scientists. Occasionally wild pandas may show up in the Reserve. Every year more than 100, 000 visitors come to Wolong Panda Reserve. Wolong Panda Reserve is home not only to the giant pandas but also to rare and endangered animals such as red panda, golden monkey, white-lipped deer, gnu (wildebeest) and precious plants like yew and beech. Other major places of interests in Wolong. 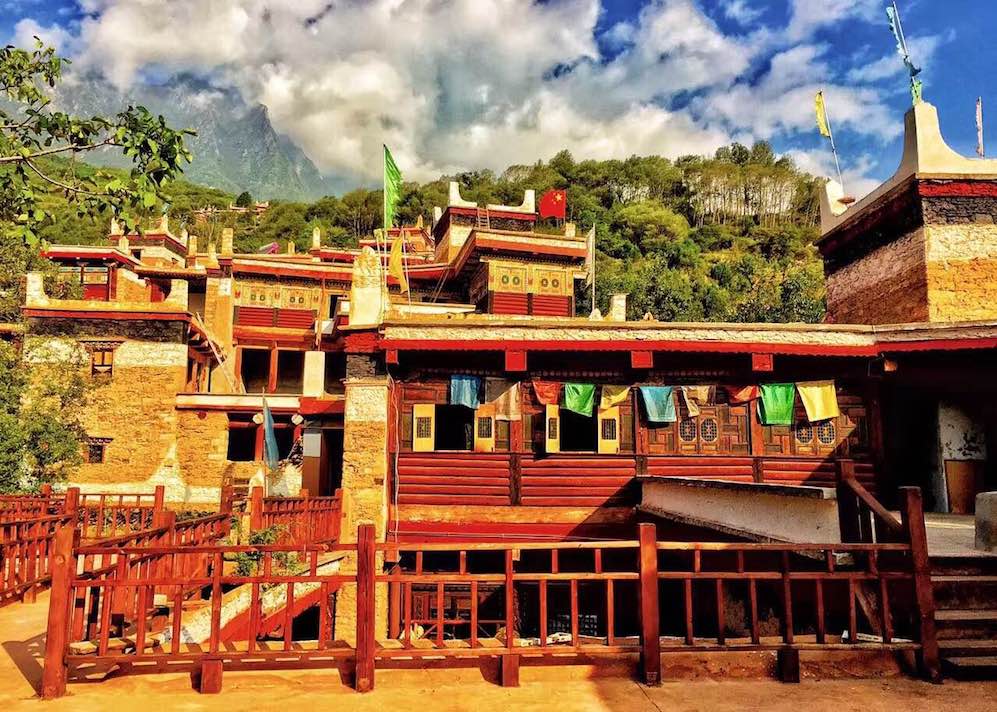 The local people in Danba are called Gyarong Tibetans. It is said that they are the descendants of the people of the ancient Xixia Kingdom, who merged with the local people after they fled from Gansu and settled here. Danba has long been acclaimed as the Kingdom of Thousands of Ancient Blockhouses. Visit the ancient block towers in Suopo, 10 kilometers away from the county city, is one of the rare places in China that has preserved complete Tibetan style residences. More than one hundred buildings keep the same architectural style with a complete and unique character of Jiarong Tibetan residences. Under the blue sky, the Tibetan residences decorated in red, white and black are strewed at random but also in order from the bottom to the middle slope of the valley.

Luhuo, Drango in Tibetan, 70km further, had Drango Gompa, which once had over 1000 monks. The monastery sits on the hillside in the Tibetan-style southern part of town and has a large newly carved wooden statue of Jampa. The Tibetan name of Drango means ' head of the rock' and derives from Luhuo's strategic positon at the confluence of two rivers. 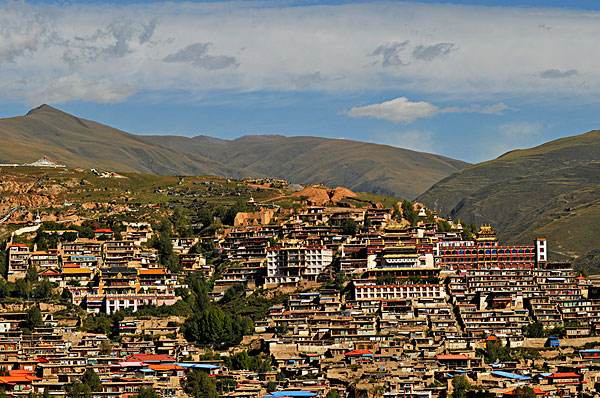 Garze Monastery is just north of the town's Tibetan quarter and is the region's largest monastery, with over 500 monks. Encased in the walls of the main prayer hall are hundreds of small golden Sakyamuni statues. In a smaller hall just west of the main hall is an impressive statue of Jampa dressed in silk.

Yihun La-tso still called Xinluhai is located at the east of Que'er mountain, about 13km to travel from ManiGango. In Tibetan, Xinluhai means a lake that overwhelms a god. Legend has it that the favorite wife of King Gesaer had been here, overwelmed by its peace and beauty.

Xinluhai is a stunning, holy alpine lake bordered by chortens and dozens of rock carvings. The lake is backed by the huge glaciers of Que'er shan and it's possible to walk an hour or two up the left side of the lakeshore for glacier views. 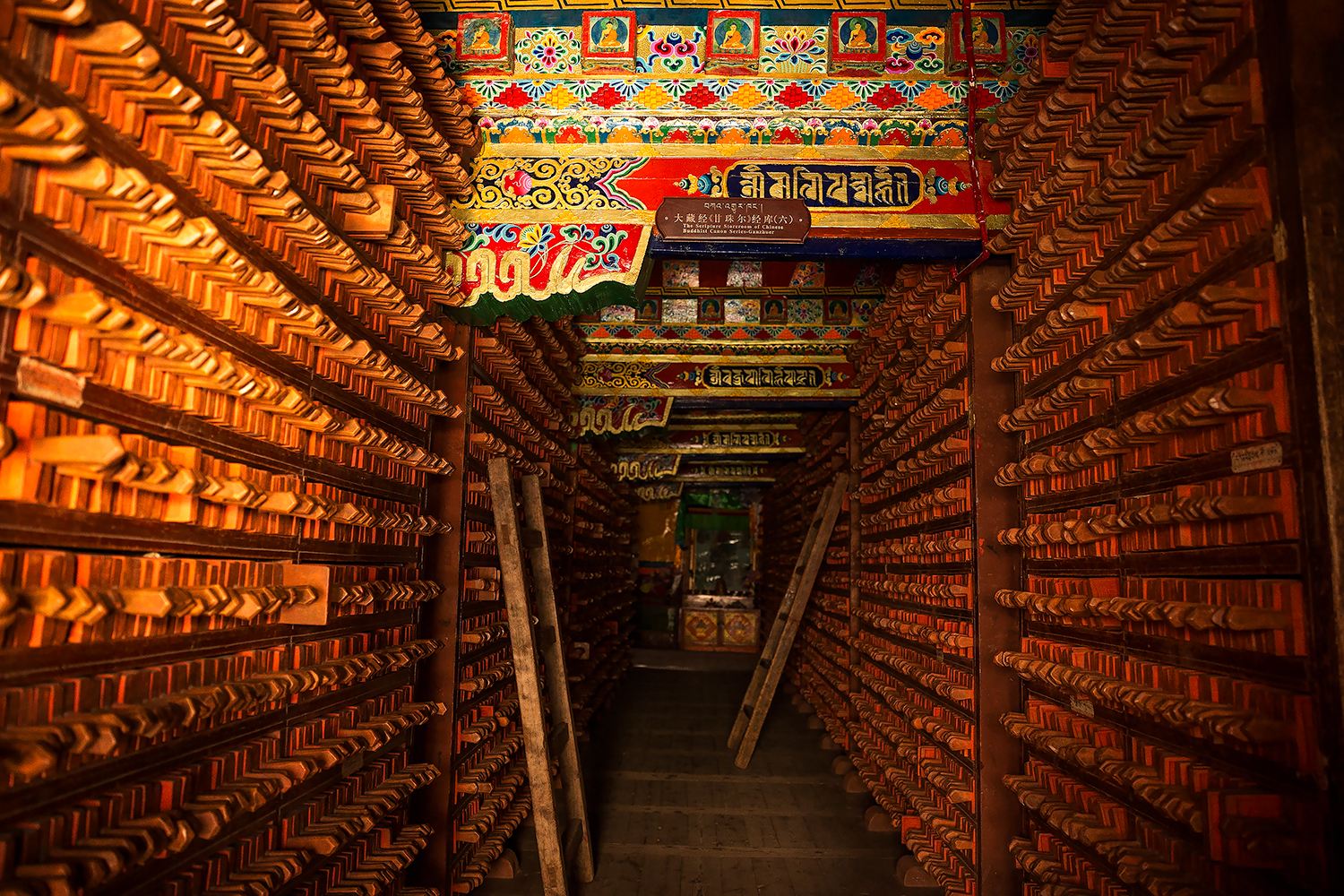 It is located at the heart of Derge. The press houses more than 217,000 engraved blocks of Tibetan scriptures from all the Tibetan Buddhist orders including Bon; the collection makes up an estimated 70% of Tibet's literary heritage. These texts include ancient works about astronomy, geography, music, medicine and Buddhist classics, including two of the most important Tibetan sutras. A history of Indian Buddhism comprising 555 wood-block plates is the only surviving copy in the world.

Within the monastery, dozens of workers hand-produce over 2500 prints to order each day, as ink, paper and blocks fly through the workers' hands at lightning speed. Upstairs is an older crowd of printers who produce larger and more complex prints of Tibetan gods on paper or coloured cloth. There are some nice murals in the two groud-floor chapels, so bring a torch. You can geta close-up look at the workers who carve the printing blocks in the administrative building across from the monastery.

The admission is 35RMB per person, and photography is not allowed in the monastery.

Chengdu
Half day
∙ Private ∙
Family focused
Sichuan is the natural home of the precious pandas and the best place to spend half day to visit those chubby bears. Arrive to see them when most active and feeding. Get closer by holding a panda and get a once in a lifetime photo.
Add to shortlist
From US$ 52
View tour >