When it comes to leisure activities, Chengdu is the hands-down leader of China. Sichuan has a widely known reputation for being one of China's most laid-back provinces: from traditional teahouses to shopping malls, modern cafes, and pubs and clubs, there are one-hundred-and-one ways for you to enjoy the entertainment options here, and when you visit, you can feel the vitality of this city both day and night. 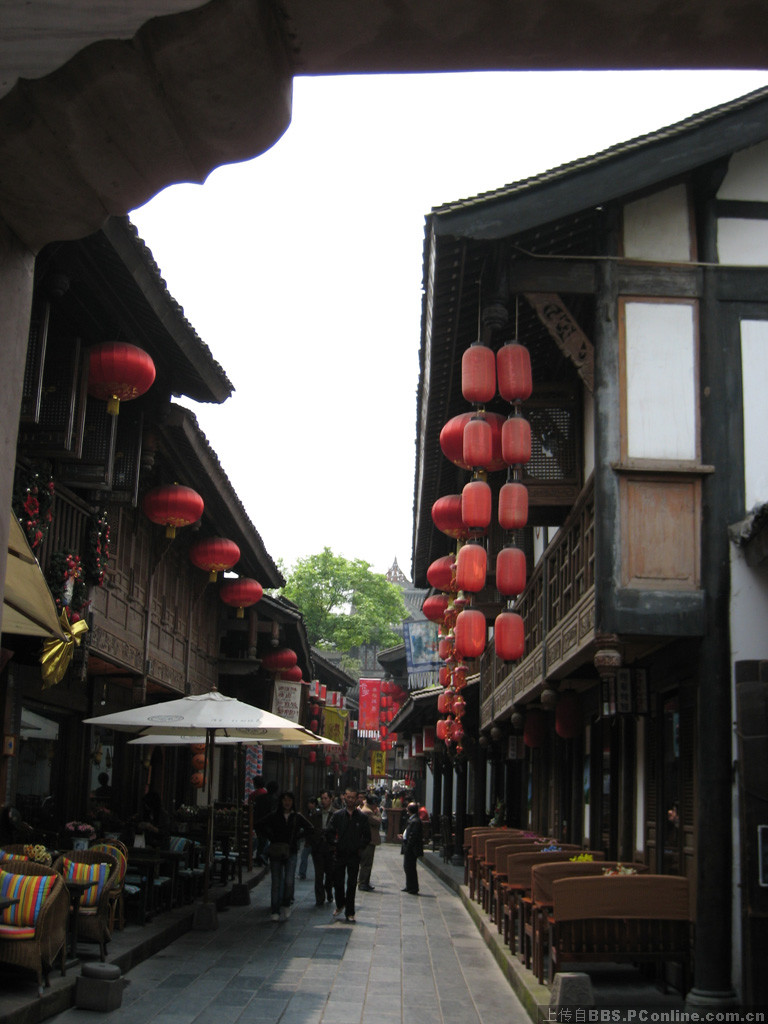 With a long and storied history, Chengdu has managed to maintain some cultural old town streets, which reflect the rich cultural heritage of Sichuan province. In addition to preserving the historic look, the local delicacies and exquisite hand crafts sold in the booths and stalls along the way add to the antique feel.

Located south of downtown at No. 2 Xinguanghua Street, Jinli street (锦里街) is a vestige of time past. This single narrow lane weaves by shops bustling with the same energy it did a hundred years ago, and the beautiful wood-frame buildings complete the scene. This walking street is a place where you can get an authentic glimpse of Chengdu's ancient beauty and energy. Traditional red lanterns hang high on the wooden eaves overhanging the densely packed street, while the numerous shops below sell all kinds of crafts and local delicacies, making it a hot tourist destination.

The Wide and Narrow Alley (宽窄巷子), located west of downtown on Changshun Street in Qingyang District, could be Jinli's twin sister. Named for the differing widths of the parallel alleys that make up the block, the Wide and Narrow Alley is a wonderfully restored collection of stone buildings with a slightly different feel than Jinli. There are Western and Chinese snacks available in the numerous open-front shops, as well as a two-story Starbucks with a great view from the balcony. In the lane that connects the Wide and Narrow Alley, you can find row upon row of fascinating pictures on display of other attractions in China. While walking on the street, you may bump into live actors dressed like statues of residents from a century ago, with their faces painted to be consistent with the color of their outfits - don't be surprised if a "statue" invites you to take a photo with them! You can take photos with them, but it may cost several dozen RMB.

Located in Qingyang District near Sichuan Provincial Museum, Chengdu's Qintai Road (琴台路) is another big attraction for those who enjoy classic Chinese architecture. Once stepping onto the street, your whole view will be captured by the long row of red bricks and grey tiles decorating the time-honored traditional buildings, making you feel life you have just stepped into an Imperial palace. Qintai Road is closedly related with the love story between Zhuo Wenjun, a pretty lady who are good at playing piano and Sima Xiangru, a poor but profound writer in the Western Han Dynasty (206 B.C.-24 A.D.). Today, you can even find a Wenjun Hotel named after beautiful Zhuo. In addition to the large jewelry shops that have existed for decades, large numbers of pubs are also popping up on this street. One noteworthy stop is the old drama house on Qintai Road, which has been preserved from ancient times - try to grab a performance there if you have time! 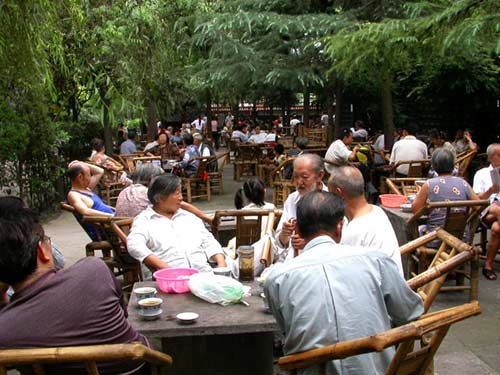 It's said that tea houses in Sichuan province rank first in the world, and of course the tea houses in Chengdu rank first in Sichuan! Tea houses not only offer genuine Chinese teas like Tieguanying, Zhuyeqing, and Maofeng, they can also provide wonderful diversions, such as the Sichuan opera performances at Yuelai Tea House (悦来茶馆).

At Dabei Temple Tea House (大悲寺茶馆), you may have a chance to see Chinese antiques and calligraghy and painting exchanges, while other tea houses, such as Heming Tea House  (鹤鸣茶馆), are famous for their open-air seating and relaxed natural atmospheres. The city's many tea houses have been drawing tourists, especially those from other countries, to come relax and interact with locals, for quite a while. 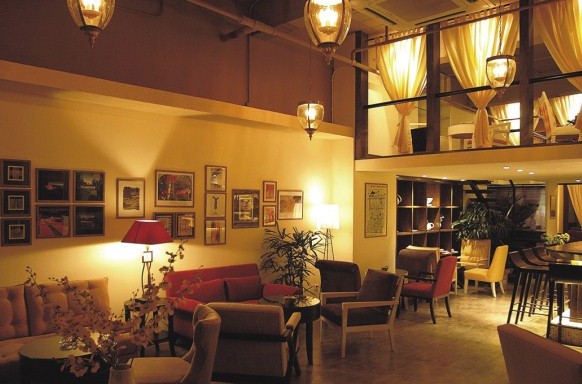 As Chengdu has grown in prominence in the international community, pubs and clubs have become another feature of this city. Mainly distributed toward the south of downtown where much of the expatriate community lives, along streets such as Renmin South Road and west of Yangshi Street, Western-style hangouts have become popular with young Chinese and foreigners alike.

The Bookworm offers an extensive Western menu and a noteworthy collection of books for sale or lending, and often has live music in the evenings. Not too far away, Shamrock Bar has an authentic Irish pub atmosphere and regularly shows live sporting events on their many screens, or just stop by for a game of pool and a pint. Hongse Niandai (Red Age) Club, which is located near the American consulate at the entrance of Nijia Bridge Road, provides private karaoke rooms of various styles, as well as a restaurant and disco hall for music lovers.

On the west side of the city, High Connections cafe takes pride in their lattes and unique coffee roast blends, and offers wifi and plenty of seating. Nearby at the Renhe Spring shopping mall, stop by cafes like Renhe Spring Cafe for a break after browsing the high-end shops in the mall.

This is just a taste of what Chengdu has to offer, a city full of hustle and bustle but one which never fails to offer a place for you to relax. Come and join the locals sipping tea and playing mahjong, or sit for a minute and look through your travel photos at one of the top-notch cafes and pubs here!

Half day Half Day Panda Base Tour

Chengdu
Half day
∙ Private ∙
Family focused
The Chengdu Giant Panda Research and Breeding Center, also known as the Panda Base, is one of the most successful panda institutes in the world. The tour includes most interesting panda-related activities.
Add to shortlist
From ¥ 350
View tour >