A poem once described Chengdu this way:

"Chengdu's landscape, as if endowed by the Ninth Heaven, is shared in the creations of many a master artist."

The city is blessed with rich natural resources and an agreeable climate. With Chengdu's various and sundry attractions, swarms of tourists are finding their way to Sichuan province. However, visitors are increasingly finding that Sichuan has more to offer than just Chengdu's many attractions, and more and more, they are coming not only for attractions around the city proper but also for the beautiful scenic spots on the outskirts of the city and throughout the province. 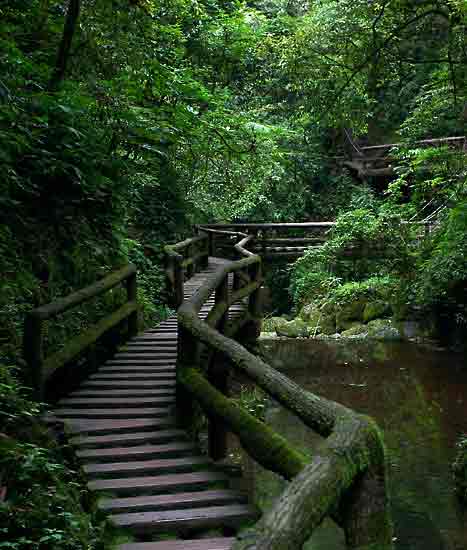 Situated as an eastern suburb of Chengdu, Luodai Ancient Town is still home to 85% of the Hakka people in the area, descendants of Hakka immigrants from China's east coast provinces of Guangdong, Jiangxi, Hubei and Hunan. Walking on the antique streets of this ancient town, one finds a distinct combination of mysterious Hakka culture mingled with various modern elements. Similarly, the Sanxingdun Museum in Guanghan, to the north of Chengdu, gives a different perspective of ancient Shu culture than the Jinsha Site Museum in Chengdu's western Qingyang district.

Another well known attraction is the Dujiangyan Irrigation System, deemed the most magnificent water conservation project in the world because of its simplicity and primitive ingenuity, is only 57 km (35 miles) west of Chengdu in Dujiangyan. To the southeast of this monumental irrigation project stands one of the most famous Taoist temples in China - Mount Qingcheng.

Sichuan has much more to offer than just Chengdu and its many attractions. Come see the vast expanses of beautiful spaces and historical landmarks that fill this bountiful province.