Yangtze River is the third largest river after the Nile and Amazon rivers in the world. Yangtze is also called Chang Jiang (长江 Cháng Jiāng), which means long river in Chinese. This why you should book cruise tours in China and enjoy the tranquility of the river with beautiful mountains on the sides. A cruise trip on the famous Century Diamond might just be the right choice to make. History tells us that the official Wen Tianxiang of Song Dynasty (13 th century) wrote a poem and entitled Yang Zi, so missionaries named the whole river Yangtze. It accounts for one- fifth land area and traverses through 11 provinces in China, Yangtze River is 6,418 km. (3,988 mi.) long: from Qinghai - Tibet Plateau emptying into East China sea.

In general, people consider the Yangtze River as dividing line between North China and South China. It has numerous tributaries including: Han river, Jialing River and Gan river and it also produces big discharge volume for watering the Southern area crops. Hence it is given the name Mother River. The Three Gorges Dam on the river is the largest dam project in the world. Yangtze River has served as main transportation route for 2,000 years and now as a cruise tour in China.

Yangtze cruise from White Emperor city (白帝城) in Chongqing to Yichang (宜昌) is 600 km. (373 mi.). Here are three beautiful gorges you will pass by during the trip, which you will be eager to see: 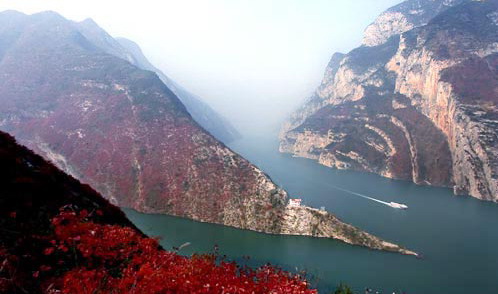 On the Yangtze River Cruise ship, which the WindhorseTour suggests to their customers is The Century Diamond. It is the first superior 5-star cruise ship. The cruise tours in China gives the tourists to explore China from the water, which is an exquisite view. There are a number of activities to do while you are on the cruise tour in China, specially along the Yantze River such as you will have sightseeing time, shore excursion on the Shennong stream (the only completely subtropical forest ecological in Asia), sail through to enjoy the beautiful gorges on the Sundeck and a bus tour to The Three Gorges Dam.

Meanwhile, Century Diamond holds on board activities such as dumpling (traditional Chinese food) making competition, teach Majing (popular table game in China) and Taiji Boxing (good for body health) as well as enjoy the captain's welcome party thrown for you. During the 4 or 5 days trip you will basically see every scenery along the Yangtze river.

Chongqing
⇀ Yichang
...
Chongqing ⇀ Yangtze Cruise ⇀ Yichang
4 days
∙ Private ∙
1st Time travel to China
Taking a cruise on the Yangtze River gives you a chance to enjoy the leisure time surrounded by the water and the sky without missing the most essential scenic spots of the breathtaking Yangtze Three Gorges.
Add to shortlist
From ¥ 2,900
View tour >