Must visit Jiayuguan Pass - ending point of the Great Wall 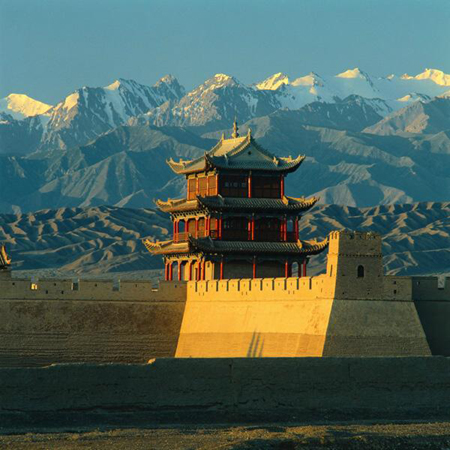 Jiayuguan Pass is located at the narrowest point of the western section of the Hexi Corridor on Silk Road and it represents the western starting point of a section of  the Great Wall. Constructed as far back as 1372, it's said that the official demanded worker can't leave any bricks behind when whole construction finished, otherwise all workers will die of this condition. However, when the all project was finished. just one brick was left behind. The worker smartly told the official the one surplus is God's will which would bless the whole Jiayuguan Great Wall so that it remains last forever. At the end, all workers didn't die also the remaining one brick become a famous tourist spot located at the Jiayuguan Pass.

As an ancient military fortress, Jiayuguang covers an area of 33,500 sq. m. (109,908 sq. ft.). This Pass was constructed in three concentric layers: the central area is inner city which contains the pass' largest buildings; the outer city section that surrounded by a large wall with watchtowers and turrets; the moat for defense was set up at the final stage. You may imagine that how these features combined a strongly protection deal with any attacks.

The inner city of Jiayuguan Pass is trapezoid-shaped and it's enclosed by the city wall. It has both west and east gates, each city gate is protected by its own small guard tower. Inside the inner city, there are some tourist spots like Youji Jiangjun's Mansion, Jing Pavilion and Wencheng Hall. On the west side, there is a grand stele house in pavilion. The four Chinese characters were carved on its surface - "Tian", "Xia", "Xiong" and "Guan"  which means the Strongest Great Wall Under Heaven. The east gate of inner city are the Guandi Temple, where you'll see an ancient style theater tower. 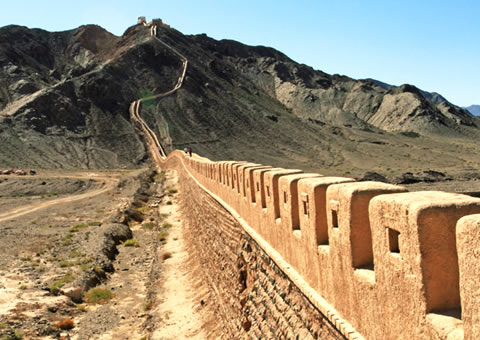 The Suspended Great Wall is a part of the Great Wall which is located in the north of Jiayuguan Pass. It was built on the ridge with the 45 degrees incline and it's height make it looks as it is falling down from the hill. Hence the reason people regard this section as 'Suspended Wall' . The Suspended Great Wall was an ancient defense system at Jiayuguan Pass with 1.5 km. (about 1 mi.) long. Even if it will be hard for some travelers to climb all 400 steps, it's still worth when you looking afar scenery on the top. Travelers who go to the top praised that the scenery they saw are totally liveliness and such a natural view they haven't seen before.

Also, there are some other historical sites that can be found around Jiayuguan Pass area, such as the First Frusta in the south. When you travel to Jiayuguan Great Wall, as you'll be in the desert environment so don't forget to wear sunscreen and bring enough water. Whether you have heard about Jiayuguan Great Wall or not, you can't miss this distinctive place during your Silk Road trip. You can get some information about Silk Road from: Silk Road Explorer.