Having the splendid culture, Kangding is always regarded as the key site in Sichuan-Tibet Line and the ancient tea horse road. Tracing back to its long history, Kangding has been the political, economic and cultural center of Kham Tibetan area for many years. With an area of more than 11,600 square kilometers, Kangding is a great home to Tibet people, Han people, Qiang People and other ethnic groups. In this post, you'll find out Kangding attractions, its best traveling time as well as how to get to Kangding.

Actually, Kangding offers you different beauties at different season. Relatively speaking, May to October is the high season to visit Kangding.

May and June are the best months for trekking Gongga Shan. At that time, you can enjoy the warm sunshine and avoid rainfalls. It's really suitable to take Gongga mountain trek.

July and August are the best time to Tagong Grassland. Under the blue sky and white clouds, wild flowers are flourishing everywhere. It seems that spring just sets in Tagong Kangding.

September and October, autumn in Kangding, are the best period to go to Xinduqiao for photography. I bet that you must be absorbed by the golden scenery.

Note : You'd better make good preparation for the rainfall and sunshine during May to August. As for September and October, it would be very cold at Kangding and sometimes snow. We suggest you to bring down coats here.

How to Get to Kangding

At present, you can visit Kangding by car and flight. Train is still unavailable.

Public Bus to Kangding - Tourists can take bus from Chengdu to Kangding at Chengdu Xinnanmen Bus Station and Chadianzi Bus Station every day. And the ticket price varies with the vehicle type.

Flight to Kangding - Located in the Zheduo Mountain, Kangding Airport, the world's second highest airport, has been operated since 2008. It only takes you 35 minutes to fly from Chengdu to Kangding.

Overland to Kangding - There are three routes for you to choose from :

Note:There is still no train to Kangding right now.

What to See in Kangding

Gongga Shan Mountain
Many years ago, Mount Gongga has aroused people's attention. As for mountaineers, it has irresistible appeal, thus making it reputed as the king of the mountains. In the year of 1980, Gongga Shan Mountain, together with Mount Everest and other seven mountains, were open to foreign climbers. Since then it has attracted a large number of world-class mountaineers to climb, especially for Japanese climbers who called it as their "father mountain" (Mt.Fuji is their "mother mountain"). 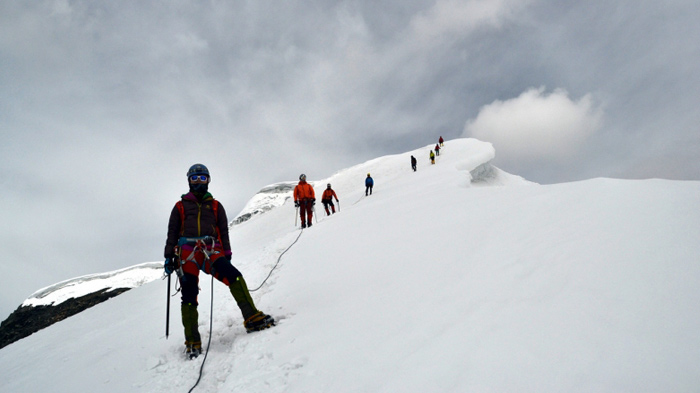 We suggest you to trek Gonggar mountain during May to June for it's the transition period between dry season and rainy season. You can enjoy the warm sunshine and avoid heavy rains. Gonggar shan is majestic and incomparable. Once standing on the top, you can take a panorama view of the whole surroundings. But for the trekking difficulty is great, it's generally not suitable for amateurs to have a try.

Highlights: This is the most classical route to experience our great nature in western Sichuan. The scenery is marvelous, varying from visible glaciers, rivers, primitive forest, waterfall, grassland, etc. And wild plants are scattering everywhere, like rhodiola, gastrodia elata, tricholoma matsutake, fungi and so on. If lucky enough, you'll have chance to see antelope, marmots, woodpecker, giant salamander and other wild animals along the way. Travellers should drive cautiously to avoid hitting the livestock on the road.

Xinduqiao
Xinduqiao is not a scenic spot but a town in Sichuan. With the altitude of 3,300 meters, Xinduqiao has no iconic landmarks but a 10-kilometer-long "photographer corridor". 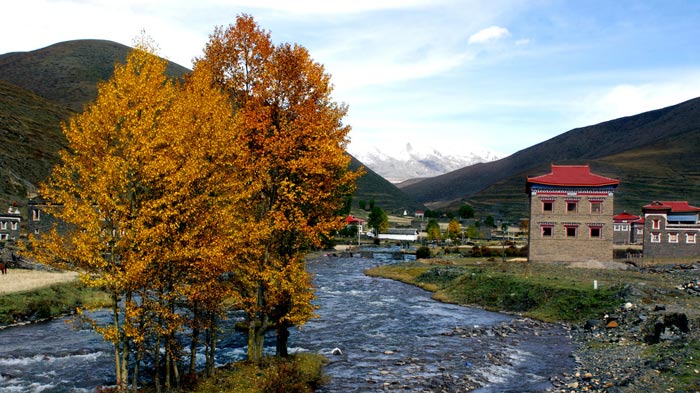 Xinduqiao town is really a fascinating paradise for photographers to get great shots. Located at the fork of G318, Xinduqiao offers you a picturesque scenery, including magical light, boundless grassland, curved streams, golden poplar trees, rolling mountains, characteristic Tibetan villages, etc. This is the typical western Sichuan scenery, a fascinating world of light and shadow! 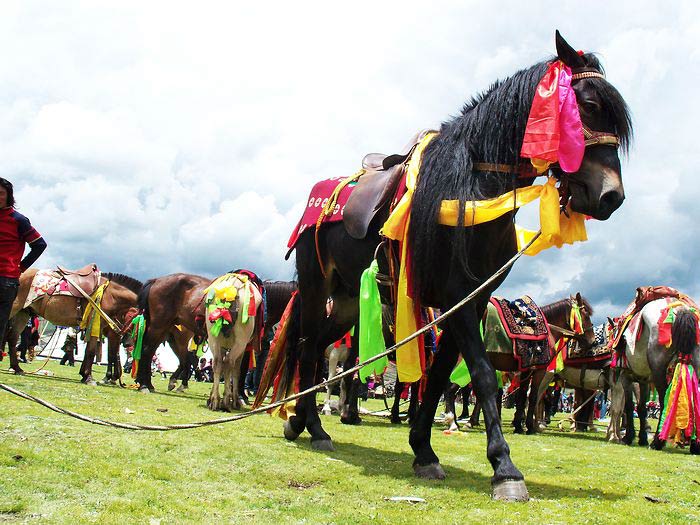 Tagong is the Tibetan language, meaning bodhisattva favorite place. Situated at the the altitdue of 3,730 meters, Tagong Grassland has covered an area of 712 square kilometers. Driving along Sichuan-Tibet Highway, you'll pass vast pasture, stunning waters and flocks of cattle and sheep. 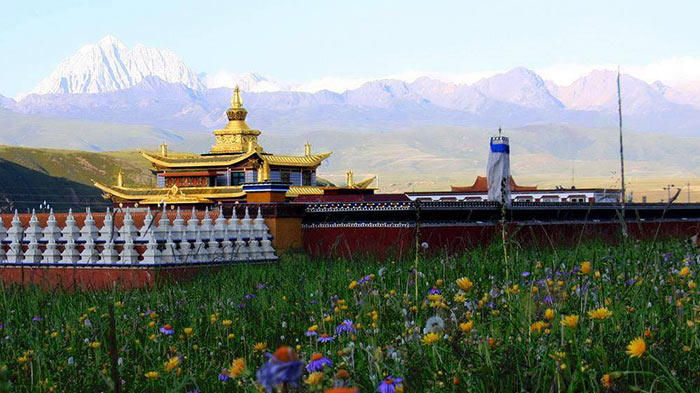 What's more, traditional horse racing festival would be hold twice every year. Tibetan herders dress themselves in festive costumes and gather from all directions to celebrate this grand traditional festivals. If time allows, you can try to participate in our Sichuan Kham Adventure Tours to appreciate breathtaking horse skill performance and merge into a sea of joy. 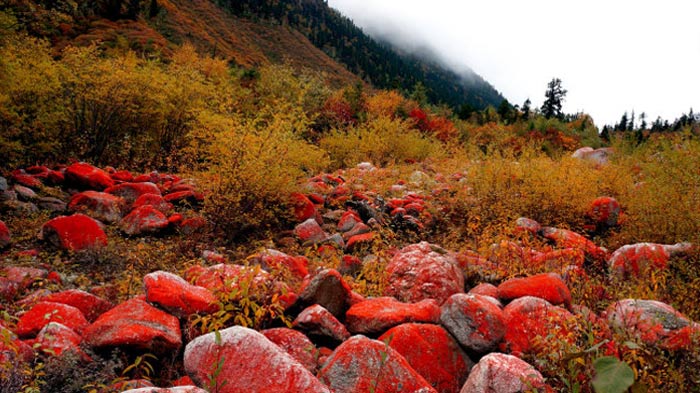 As an important part of large Hailuogou Scenic Area, Yajiageng Scenic Spot (Yajia Qinghai) is located between Hailuogou and Kangding. It's also reputed at the "China Botanical Garden" and "China Redstone Park" for its large-scale red stone beach. The rust-red material on the surface of stone is a kind of rare algae (lichen complex). Under the proper humidity, temperature and climate, those algea grow out, die naturally after four or five years and then regenerate again.

Kangding is a fusion of Tibetans and Han people, where you can taste various kinds of Tibetan cuisine and Sichuan dishes. In the downtown of Kangding, it's easy to find delicious Sichuan food. However, starting from Xinduqiao, many restaurants begin to offer a larger portion of Tibetan meals, like zanba, barley wine, butter tea and so on. Learn more about our pleasant Sichuan tours!

We will be staying at Guozhuang Nan Wu Hao Boutique Inn.
Thank you very much

In reply to Hello! We would like to… by Tal Carmel (not verified)

Thanks for contacting us! We can certainly arrange the trek happen for your family, I've sent the details via email earlier today, please go through the details and feel free to share your comments and thoughts.

Look forward to your reply soon.